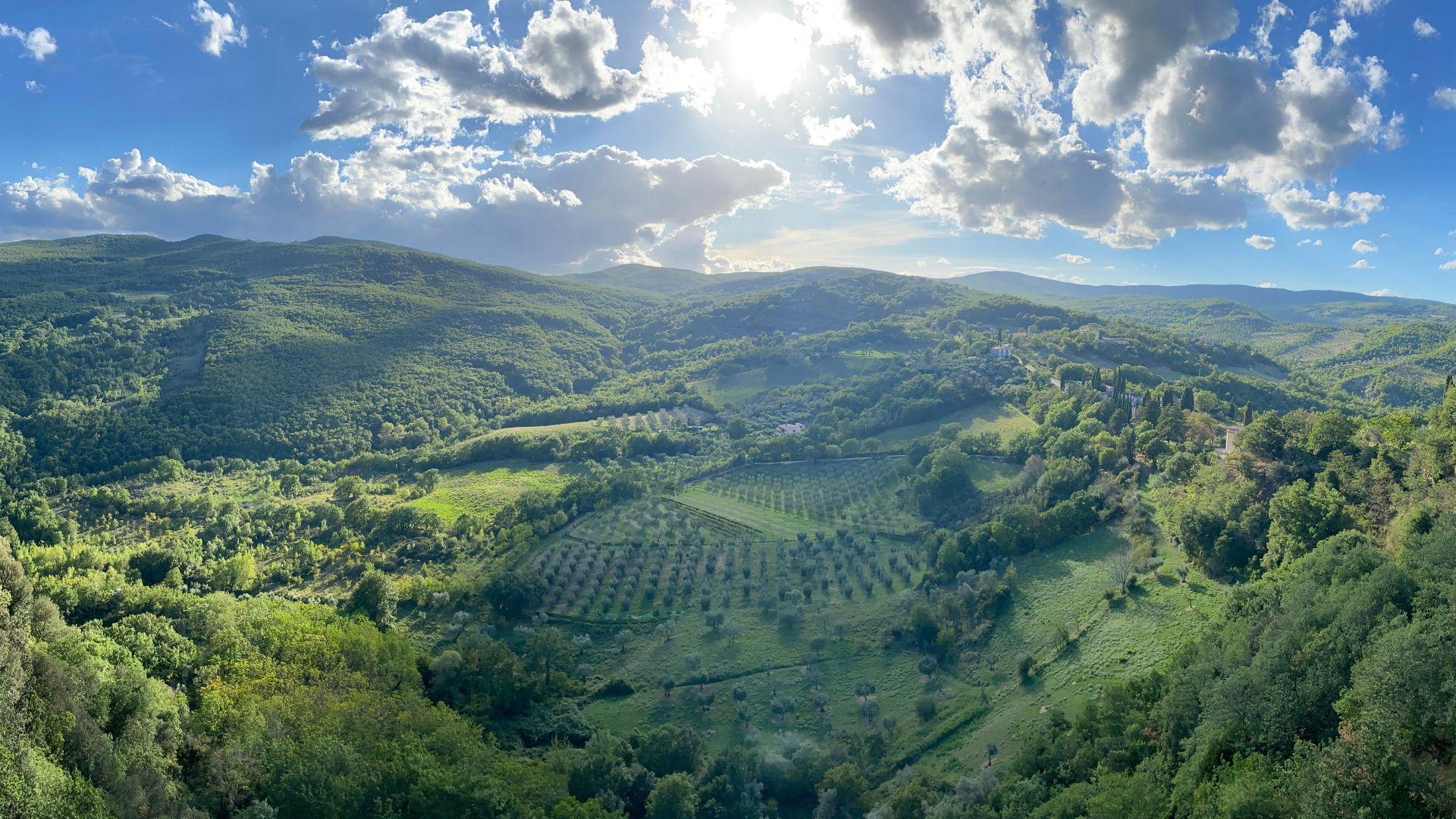 Dubbed ‘the green heart of Italy” for its breathtaking biodiversity, the Umbria wine region stretches across rolling hills, wild forests, and pristine lakes bookended between the Apennine mountains.

The Italic peninsula’s only land-locked wine region borders Tuscany to the north, Marche to the east, and Lazio to the west. Settled by Etruscans millennia ago, a strong agricultural tradition underpins Umbria. But don’t let the ‘green acres’ vibe fool you. Under-the-radar Umbrian wines offer unexpected quality, diversity, and affordability.

“Umbria has a lot of things one might find in Tuscany, but it is wilder, less populated, more laid back, and less expensive!” says Tanya Morning Star of Cellar Muse, international wine educator, Vinitaly Italian Wine Ambassador, and Global Education Ambassador of Orvieto wines.

Many US consumers recognize the white wines of Orvieto made from Grechetto and Trebbiano, and the red wines of Montefalco made from Sangiovese and Sangrantino. However, that’s changing, region by region.

Located at the boundaries of Tuscany and Lazio, the tufa-escarved town of Orvieto overlooks the rolling Umbrian hills. Western-lying volcanics, eastern-flanking sands, a spine of alluvials, plus pockets of clay compose Umbria’s tessellated terroir.

“For me, the wine region of Orvieto represents beautifully the terroir diversity of Umbria, but also the general cultural juxtaposition between tradition and maverick innovation,” says Morning Star.

“There are very few places in the world historically well known for botrytis wine, like Sauternes in France,” says Giulia Di Cosimo, vice president of Consorzio Vini di Orvieto. “Muffa Nobile is a great champion of the area.”

Montefalco claims fame for two distinctly different Umbrian red wines. The first, silky Montefalco Rosso DOC, like that by Antonelli, incorporates a minimum of 70% Sangiovese, balanced by a blend of approved local and international grapes.

Consequently, agri-tourism abounds here. So does a drive to eliminate chemicals in the vineyards. Mostly family-owned, nearly 15 winemakers produce approximately 990,000 bottles of wine annually. “We find a lot of family-owned wineries and not a lot of international, non-local winemakers,” says Emanuele Bizzi, president of Consorzio Tutela Vini del Trasimeno. “This is important to have high quality in traditional winemaking.”

However, younger consumers increasingly clamor for fresh, lively Trasimeno Grechetto DOC like Montemelino, and DOC Trasimeno Rosato DOC by Podere Marella. “We concentrate on drinking these wines during the aperitivo, during sunset,” says Bizzi, “Which is our most convivial part of the day!”

Clearly, Umbrian wines overdeliver in quality, diversity, and affordability. “Umbria has a lot to discover in terms of wine styles,” concludes Morning Star. “The wines of Umbria are extremely affordable, and many are quite age-worthy.”