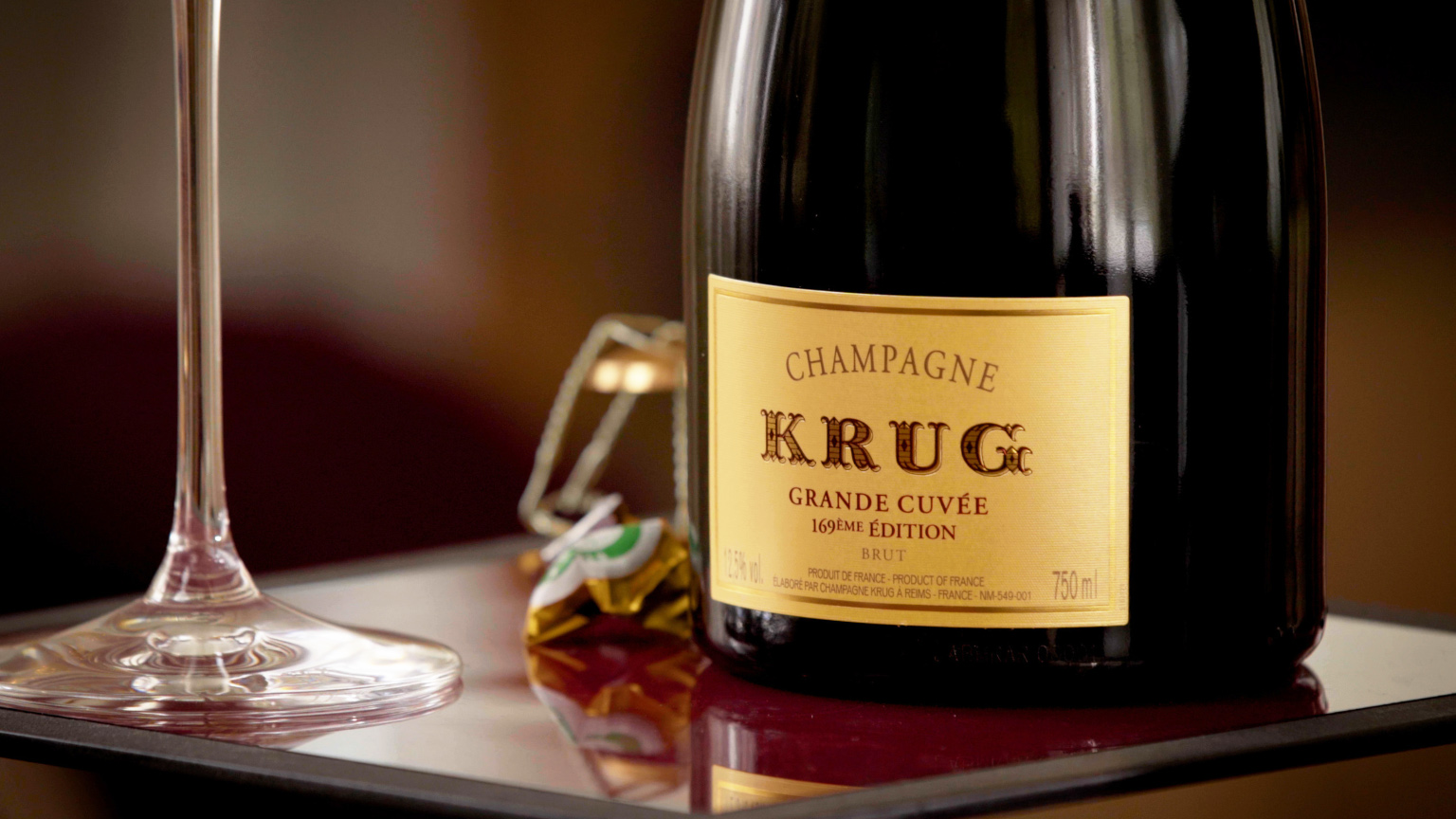 When people think of Champagne, they think of Krug. It’s one of France’s most iconic Champagne houses and gets credit for being one of the early creators of the (now standard) non-vintage house blend. The weather in the Champagne region is consistently terrible, making it difficult for grapes to ripen perfectly every vintage. That is what makes vintage Champagne, a sparkling wine consisting of grapes grown in one specific year, so special. Weather conditions don’t allow for such a feat every year.

In contrast, a non-vintage Champagne is a composition of wines from several different years. It’s what Krug Champagne refers to as a symphony. The blend includes a generous portion of reserve wines, each unique to the final profile. Some reserves provide the bass notes or the structure. At the same time, other reserves showcase the high notes of the expression, perhaps acting as the melody. It’s a different symphony for every edition of its Grande Cuvée. Currently, Krug has masterfully conducted 169 beautiful composed editions.

The notion that founder Joseph Krug was of German descent is perhaps where his innovation was born. Krug was an outsider. He arrived in Paris in 1834 after fleeing Mainz, Germany, during the Napoleonic Empire. In France, he was highly sought-after as an accountant and began working with Champagne Jacquesson.

His passion for Champagne grew at Jacquesson. After eight years, he branched out. His instincts for tasting and blending led him to the creation of Krug Champagne in 1843. He immediately began putting aside reserve wines knowing that he would be able to create beautiful compositions, year after year.

Today, the creation of each Grande Cuvée edition is a long, detailed and arduous process. The bulk of the responsibility lies on the shoulders of cellar master (or chef du cave) Julie Cavil. She took over from Eric Lebel in 2020 after being a member of the winemaking team for 13 years.

Cavil and her team taste and rate samples over several sessions to determine each edition’s blend. This happens following harvest after the team gets a sense of what the vintage has provided. Samples from individual plots are recorded and tasted numerous times. Following this, the team identifies any missing elements needed to re-create the unforgettable and undeniable Krug expression. For this, they “audition” approximately 150 reserve wines.

A shortlist of final blends is created, with each receiving a final vote from members of the tasting committee in the spring. The choice Champagne becomes the next Grande Cuvée edition and proceeds to the bottling line between April and May. It then moves to the Krug cellars, where it rests for at least six years. Between the age of the reserve wines and the time needed to cellar the wine before release, it takes approximately 20 years to create a single edition of Grande Cuvée.

An integral part of the traditions at Krug lies in the family lineage. For its nearly 200 year history, a member of the family has been at the helm. When Joseph Krug died in 1866, his son Paul took over. Paul oversaw the brand’s success in the United Kingdom and helped lead the move into the House’s current premises on Rue Coquebert in Reims.

Generation after generation, the company stayed within family hands, even when LVMH acquired it in 1999. Moët Hennessy Louis Vuitton, commonly known as LVMH, is a French holding multinational corporation and conglomerate specializing in luxury goods. At the time, brothers Henri and Remi Krug had been running things together since the mid-1960s. They eventually stepped down in 2007 but remained on the tasting committee. In 2009, Olivier Krug, son of Henri, became House director. Currently, Olivier plays an integral part – alongside Julie Cavil – in helping create every new edition of Grande Cuvée.

Other Kinds of Krug Champagne

The Grande Cuvée is, by far, the most well known sparkling wine the House makes. However, it does produce several other styles, although in significantly lesser quantities.

Krug Rosé was introduced into the portfolio by brothers Henri and Remi Krug. The House currently showcases its 24th edition. Each rosé edition spends an average of seven years resting in the cellars. Many consider it to be one of the most gastronomic Champagne rosés due to its depth of flavor and elegance.

In years that allow, Krug makes a vintage Champagne. Its most recent vintage is 2008 and is a wine that expresses Classic Beauty, as nicknamed by the House. As part of Krug’s vintage program, they also offer Krug Collection. Krug Collection is the second release of older vintages. Very limited number of bottles are kept under ideal conditions in the Krug cellars and released when its ‘second life’ is ready to be experienced by drinkers.

A fundamental part of Krug’s identity lies in its two single plot wines. Clos du Mesnil is a Blanc de Blancs made from Chardonnay that grows in Mesnil-sur-Oger, an iconic village in the heart of the region. Walls have protected the 1.84-hectare plot since 1698. Clos d’Ambonnay is another small walled plot, only 0.68 hectares in the heart of Ambonnay. The vineyard grows Pinot Noir for Krug’s Blanc de Noirs Champagne.

The history of Krug Champagne stands out because it’s not only interesting but woven throughout the House’s modern identity. As shown in a recent episode of SOMM TV’s Behind the Glass, the family and its heritage are exemplified in every bottle.

Here’s a clip from that episode showing Julie Cavil walking through Krug’s Heritage Cellar, where some of the House’s oldest bottles live.