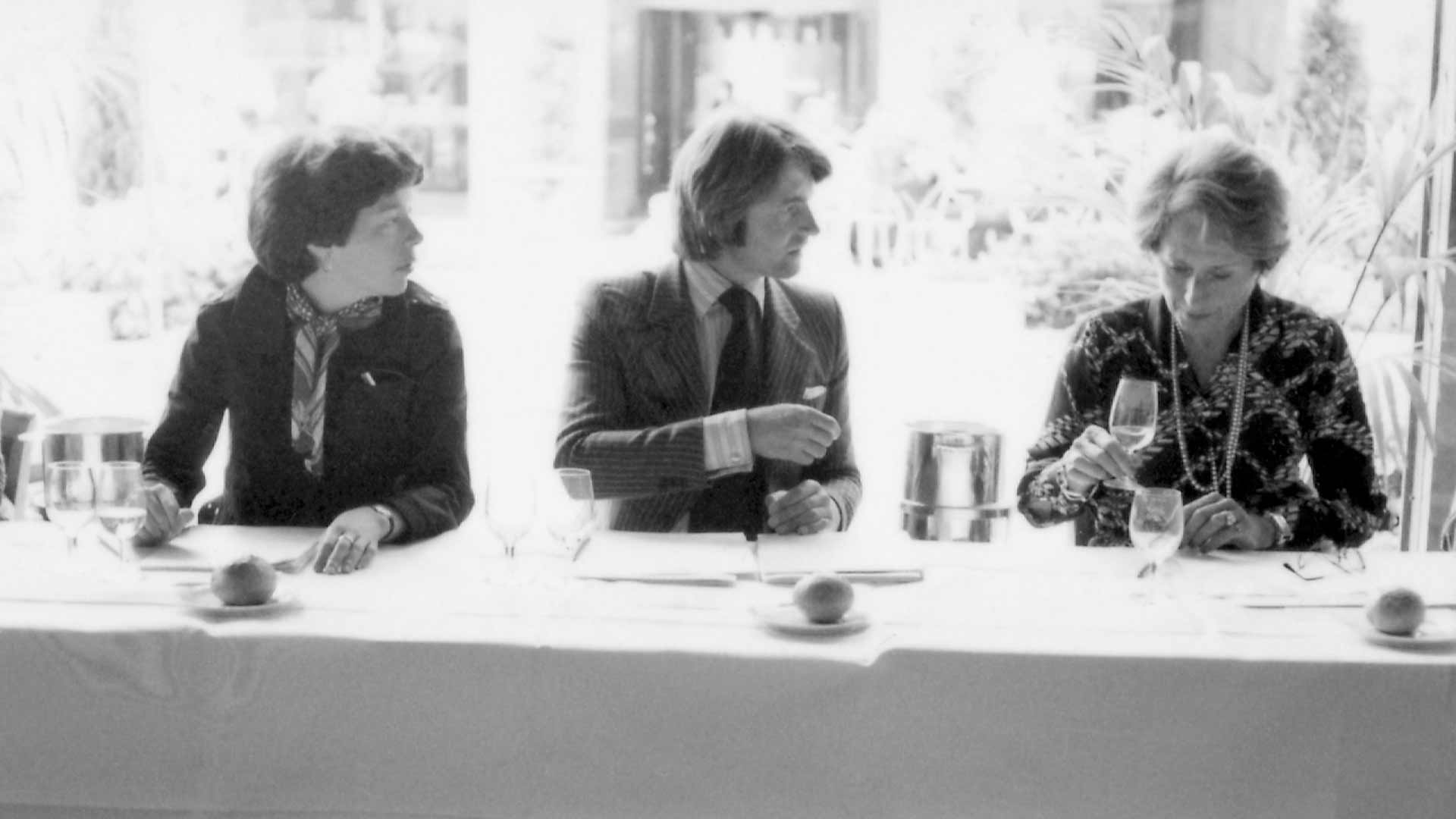 When searching ‘Judgment of Paris’ on the internet, a story of Greek mythology comes up. Some know this as a tale that eventually led to the Trojan War. So it’s not a surprise that the Paris Wine Tasting of 1976 was informally dubbed the Judgment of Paris in a nod to the shocking – and revolutionary – results of the blind tasting competition.

The problem with tales, fables and stories alike are facts and details get lost. Sometimes completely new facets are created from mere hearsay. That’s exactly what happened when the creators of Bottle Shock, which was released in 2008, told their version of how the Judgment of Paris went down. In real life, the tasting was orchestrated by Steven Spurrier and Patricia Gastaud-Gallagher to showcase the quality of the yet-to-be-successful wines of California. Steven, who recently passed away, was a friend of SOMM TV and always vocal about the misinterpretations in the film.

In the Spring of 2020, Steven graciously spent the time to watch the entire film alongside Jason Wise, Director of the SOMM films (virtually, of course). Available to SOMM TV subscribers, Bottle Shock Live Watch gives viewers a start to finish rendition of Steven’s candid interpretation of the film and what truthfully happened during the Judgment of Paris.

What Is the Judgment of Paris?

The Judgment of Paris changed the course of the wine industry. It thrust wines from California to a leading position among historic, premier chateaus from France. The blind tasting occurred on May 24, 1976. It positioned Burgundy Chardonnay against California Chardonnay and Red Bordeaux against California Cabernet Sauvignon. At the time, California wines hadn’t made a dent on the international scene. But Spurrier had strong feelings that the quality was on par with what was coming out of France. As it turns out – he was right!

This summer, in combination with the 45th anniversary of the Judgment of Paris, SOMM TV is releasing a film about the tasting. The film reveals the complete story of the Judgment of Paris. It begins in Napa before the tasting and leads us to the 1976 event itself. And finally, it leads us to the rippling effects into the entire world of wine. SOMM TV sought out iconic figures who were involved in the tasting. In addition to Steven Spurrier, the film highlights Patricia Gastaud-Gallagher whose idea it was to hold the tasting. She had a pivotal role in the tasting’s success and has largely been left out of the history books. Also featured are George Taber, the journalist who wrote the TIME article, and Joanne Depuy, who led the tour group that helped ensure the bottles got to Paris.

Spurrier was a heavyweight in the wine industry from an early age. At the age of 23, he became a trainee with Christopher and Co. in London, the city’s oldest wine merchant. From there, at only 29 years old, he moved to Paris to purchase Les Caves de la Madeleine. He was the owner of the shop and ran it until 1988.

In conjunction with the wine shop, Spurrier also started France’s first private wine school, L’Academie du Vin, in partnership with Jon Winroth and Patricia Gastaud-Gallagher. After selling his wine shop, Spurrier focused on consulting and writing and became the director of The Christie’s Wine Course in addition to consulting editor of Decanter magazine. He also travelled the world to attend and judge international competitions. It wasn’t until 2019 that he established the Academie du Vin Library, somewhat of an extension of the wine school. The library publishes wine classics and new titles that provide a colorful and unique representation of the wine world.

Bottle Shock, starring Alan Rickman as Steven Spurrier, is a depiction of the events leading up to the Judgment of Paris. Without knowing much about the real tasting, viewers might think the film to be mostly fact. However, as we discover during the Bottle Shock Live Watch, the occurrence of a tasting is about the only thing that’s true to history in the film.

From a casting perspective, Spurrier was both happy and a little put off by the choice of Rickman in the lead role. For the most part, Spurrier appreciated the integrity that Rickman brought to the role. However, Spurrier was only 34 when the real tasting occured. But in 2008 when Bottle Shock came out, Rickman was 62. Throughout Bottle Shock Live Watch, comments are made that Spurrier rarely ever wore a three-piece suit and he isn’t as snobby about wine as Rickman’s rendition makes him out to be. But these are just small details and minor character traits that aren’t pivotal to the bigger themes in the movie that are outright false and a complete fabrication put together by screenwriters.

Read ahead for four of the largest farces depicted in Bottle Shock.

Spurrier’s Wine Shop Was In Need of Publicity

“That is the biggest lie in the whole movie,” says Spurrier during the Bottle Shock Live Watch. Looking at the movie from a screenwriter’s perspective, the tasting needed a precipice. Going out of business and needing publicity seemed like a good one. In reality, Spurrier explains that he was in a good enough financial position to spend 15 to 20 thousands pounds (at today’s rate) to make the tasting happen. “I did it because I could afford it. And I could afford it because my shop was doing exceptionally well,” says Spurrier. Jason Wise comments, “the whole movie hinges on this, that you essentially can’t run your wine shop.” As any true Brit retorts, “total bullsh**”, says Spurrier.

Spurrier Went To California Without Knowing Which Wines To Taste

In Bottle Shock, Spurrier’s character travels stateside without having much experience tasting California wines. He drives from winery to winery, making a list of potential candidates to include in the tasting. This process occurs over a good portion of the movie, allowing for a build-up of the plot and more time for the audience to get to know Jim and Bo Barrett of Chateau Montelena.

In reality, a shortlist was already put together by Patricia Gastaud-Gallagher, director at l’Académie du Vin. The list included Stag’s Leap, Clos du Val, Montelena and Mayacamas, among others. In real life, Spurrier went to California, tasted wines from the shortlisted wineries, picked up the bottles and was on his way back to Paris. The idea that Montelena didn’t want to participate in the tasting was also false.

The concept of bottle shock is real. But it doesn’t refer to discoloration or brown wine as portrayed in the movie. Bottle shock refers to a state where the flavors of wine are temporarily altered. It happens most often immediately after the wine is bottled, when it’s most fragile. It can also happen if the bottle is jostled too much during travel.

What is correct in the film is the fact that bottle shock is brief. After a few days of settling, the flavors return to their intended nature.

Of course, Hollywood anticipation allows for this plot point to drive audiences toward the theatrical climax.

Major Details of the Judgment of Paris

In the movie, the tasting is outdoors, on the outskirts of Paris. There are spectators and commotion. Bo Barrett (Chris Pine’s character) even travels to be there to represent Chateau Montelena.

In real life, any respectable and serious tasting occurs indoors. The tasting was inside a hotel, the wines served at a table with white table cloths by staff in white gloves. The wines were poured one by one in absolute silence. During Bottle Shock Live Watch, Spurrier explains, “In the movie, it’s a performance. In reality, it was a very serious blind tasting with only the participants in the room, apart from Patricia and myself. And our notes were not taken into account,” he continues, “the judges certainly weren’t talking to each other.”

The Judgment of Paris was a turning point for wines from California, but also for all wines made in the New World. The importance of the tasting and its impact is astounding. Thousands of people owe their lives and success in wine to the Judgment of Paris. But the effects are not a see-saw. Just because California wines were on top in 1976, doesn’t mean that French wines went down. “It was a kick up the pants for French wine but that didn’t do them any harm. In fact, it was very much to their advantage,” says Spurrier during the live watch. As the saying goes, any publicity is good publicity.

Data Dive: Sideways and Its Impact on Merlot