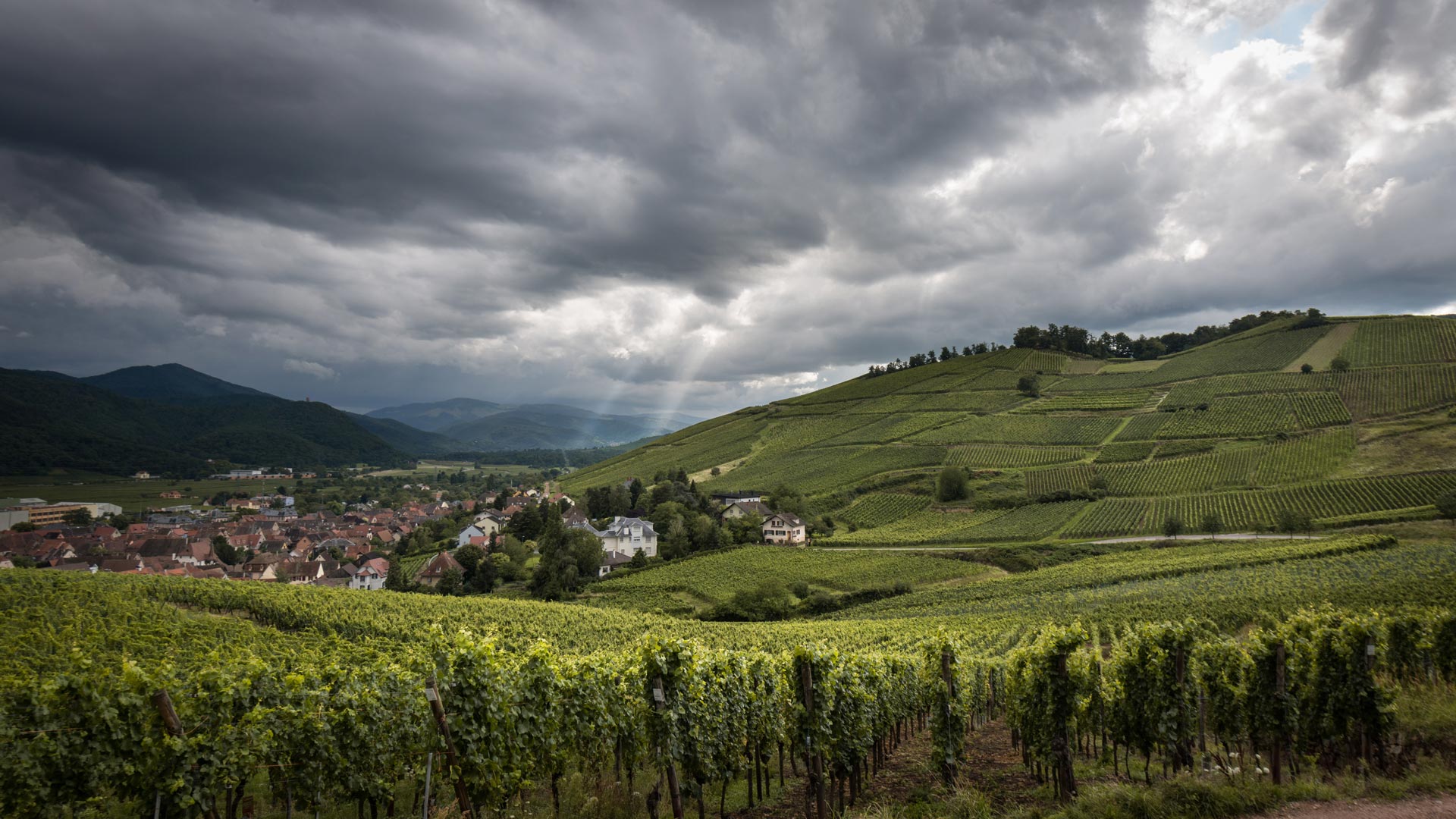 There is no limit to the amount one person can know about famous french wine regions. It’s one of the largest wine-producing countries in the world with a history that spans centuries. Some countries are famous for one or two varietals, like German Riesling or South African Pinotage, for example. But France’s unquestionable dominance continually builds on its reputation of diverse regions, varieties, terroir and styles. Nearly every pocket of France is home to a distinguished region and appellations. Each area is notable for specific varieties that thrive in a particular climate. Let’s discover what makes famous french wine regions discernable and unique.

Alsace is in the northeastern corner of France and sits in between the Vosges mountains and the German border. Noble white varieties reign supreme here. Riesling has the highest proportion of plantings. Gewürztraminer, Pinot Gris and Muscat follow closely behind. Unlike the majority of France, Alsatian wines specify the grape and not the place of origin.

White wines fall under two major appellations: Alsace and Alsace Grand Cru. Crémant d’Alsace is a traditional method sparkling wine which can include either Riesling, Pinot Gris or Chardonnay. Sparkling wines that include Muscat or Gewürztraminer are not permitted under the appellation requirements.

Often lumped in with Burgundy on a map (though distinctly individual), Beaujolais encompasses the southern portion of the winegrowing region. Situated in central east France, Beaujolais is home to 12 appellations including Beaujolais AOC, Beaujolais-Villages AOC (of which there are 39) and 10 crus. They all have one important grape in common, Gamay!

Don’t let Bordeaux be intimidating. Under the broadest terms, red Bordeaux is one of two things: a Right Bank, Merlot-dominant wine, or a Left Bank, Cabernet Sauvignon-dominant wine. These two banks of the Gironde estuary – which flows in from the Atlantic ocean – form the identity of the region.

The two sides of the estuary also have different appellation laws and classification systems. On the left bank, the 1885 classification covers Médoc and Sauternes, while Graves (Pessac-Léognan) has its independent cru classés system. On the right bank, Saint-Émillon separates Grand Cru from Grande Cru Classé and then further separates the top tier of Premier Grand Cru Classé into A (the best) and B categories.

The generic Bordeaux and Bordeaux Supérior appellations are largely red blends that can sometimes include Cabernet Franc, Petit Verdot and Malbec. Sauvignon Blanc and Semillon make up a small portion of White Bordeaux. Sauternes is Bordeaux’s sweet wine made of late-ripening Semillon, Sauvignon or Muscadelle.

Burgundy, or Bourgogne, has the largest number of appellations of any other French region and is known as one of the most terroir-focused areas. Pinot Noir and Chardonnay are equally as important in their varietal roles of Red Burgundy and White Burgundy.

Spanning 100 miles from north to south, the quality of a vineyard site determines which level of the appellation hierarchy system it falls into. Bourgogne Rouge and Bourgogne Blanc are the most generic and include wines that come from anywhere in the region. Next, Communes (or Village) Burgundy accounts for about one-third of the region’s total production. Premier Cru is the next level, of which there are 600 spread across Côte d’Or and Côte Chalonnaise. Grand Cru is the top tier, of which there are only 33 which account for little more than 1% of all production.

About an hour east of Paris is the incomparable region of Champagne. The birthplace of the traditional method, or méthode Champenoise, sees the production of Brut, Blanc de Blancs, Blanc de Noir, among other one-of-a-kind sparkling wines that are both vintage and non-vintage. As the most northerly winemaking region in all of France, temperatures are cool and with the weather sometimes treacherous.

The Languedoc and Roussillon are two regions that are often referred to as one as they both sit along the Meditteranean Coast in southern France.

Languedoc is a generic appellation, many wines made there are Vin de Pays d’Oc. Some specific appellations that boast quality red wines include Côtes du Roussillon, Minervous, Fitou, and Corbières.

Comprising four distinct areas, the Loire Valley straddles both sides of the Loire River in central France – flowing from the Atlantic Ocean to the center of the country. From west to east, the four areas are Nantais, Anjou-Saumur, Touraine, and the Central Vineyards which includes the prestigious appellations of Sancerre and Pouilly-Fumé.

White varieties run the show in the Loire. Melon Blanc (or Muscadet) is dominant in Nantais while Chenin Blanc and Sauvignon Blanc are more prominent throughout the rest of the region. Styles range from dry to sweet, oaked and unoaked, in addition to traditional method sparkling wine. Cabernet Franc holds ground as the leading red variety and accounts for 30% in Rosé de Loire.

Stats from vinsdeprovence.com boast 156 million AOC bottles produced in 2016, which accounted for 42% of rosé production across France and 6% around the world. Provence Rosé is famous for its pristine color, refreshing fruit flavors and crisp acidity. Producers often use a blend of red grapes ranging from Cabernet Sauvignon and Syrah to indigenous varieties such as Cinsault and Mourvèdre.

Provence sits in the south-east corner of France and has nine appellations with AOC status. Côtes de Provence is the largest, followed by Coteaux d’Aix-en-Provence and Coteaux Varois en Provence. Of the remaining six AOC, Bandol holds the most recognition stateside, producing full-bodied red wines with powerful tannins.

Just north of Provence is the southernmost part of the Rhône Valley. Split into a northern section and southern section, this area is where you’ll find recognizable and historical names such as Châteauneuf-du-Pape and Hermitage.

Although white blends do exist (comprised of Marsanne, Roussanne or Viognier) the Rhône Valley is more famous for its reds. The Southern Rhône is famous for GSM blends (Grenache-Syrah-Mourvèdre). The Northern Rhône showcases varietal Syrah that is earthy and smoky with black fruit characteristics and floral aromas.