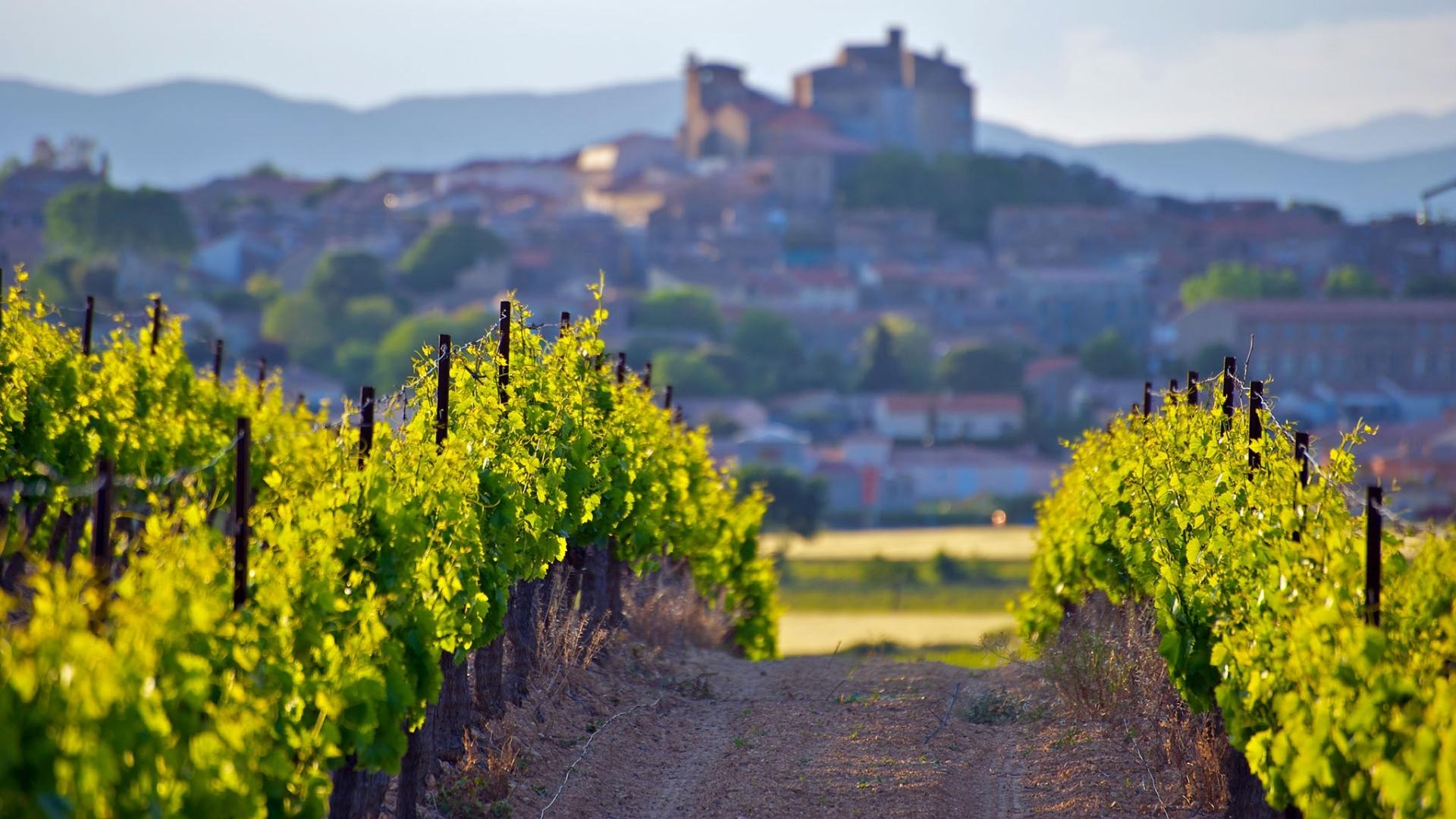 The Languedoc AOP has worked diligently to rebrand from a region focused on value wine to one of quality. So when faced with potential damage due to climate change, local producers are not giving up without a fight.

Recently, the temperatures have been hitting degrees that scientists were not expecting until 2050. According to the latest IPCC report, global temperatures are set to increase by 2.7°F (1.5°C) by 2030. The effects on vineyards could be devastating.

The Languedoc didn’t become one of the oldest wine regions in the world without getting scrappy after all, so producers are arming themselves with new and old techniques and resources. To their benefit, the production rules in the region are not as restrictive as in other French areas. So, many are taking advantage of the flexibility to maintain production and quality.

The region has always been hot and dry, and producers have long looked to areas with similar climates when deciding which grapes to plant. Varieties from the nearby Rhône region, such as Grenache, Syrah, and Mourvédre, are most prominent. But it’s also not uncommon to encounter Assyrtiko from Greece, Moristel from Spain’s Somontano region, and even some Nero d’Avola and Montepulciano from Italy.

As temperatures increase, some producers look to native varieties that are inherently well-adapted to the climate. Late-ripening grapes, such as Picpoul, that require a lot of sun and heat thrive in this environment as they retain acidity.

Cinsault is also known for its heat tolerance and high yields. It produces a soft wine with a lovely perfume and low tannins. In the Minervois and Corbières appellations, Cinsault adds a lightness to blends and produces delicate rosés.

Rarely seen outside of the Languedoc, Mauzac is an important grape in the region. After all, without Mauzac, we wouldn’t have Champagne. In the 1500s, monks of Abbey St-Hilaire in Limoux made the world’s first sparkling wine. It is a late ripener, and its acidity never wavers. When Jérôme Bernatas opened Domaine Bernatas with his brother Stéphane in 2018, he realized the ease of working wth Mauzac. “We will keep focusing on Mauzac, the historical grape in Limoux,” he says. “It’s quite rustic and well adapted to our terroir. Some grapes are no longer our geographical area’s present or future, but Mauzac is still.”

In 1970, before global warming was on the general public radar, Dr. Norbert Becker was cultivating prospective grapes at the Federal Institute of Viticulture in Freiburg, Germany. Not long after, researcher Alain Bouquet began to develop naturally resistant varieties at the Institut National de la Recherche Agronomique’s Pech Rouge lab in France’s Midi region.

Winemakers were initially cautious, not knowing how consumers would react to new varieties. However, crossings are more prevalent these days, and Bousquet’s work is in the process of being approved in various PGIs.

Cabernet Cortis is a crossing between Cabernet Sauvignon and Solaris. This high yielder is resistant to downy mildew and botrytis. It makes bold wines with tons of tannic structure, high acidity, and deep color. A beautiful example of 100% Cabernet Cortis is “La Resistante” from Jean-Claude & Anne Beirieu.

Marselan is a crossing between Grenache and Cabernet Sauvignon bred in 1961 by the French National Institute for Agricultural Research (INRA) in Marseillan, after which the grape is named. The Marselan from Chateau Ciceron is part of their “Le Jardin de Vignes Rares” line promoting water conservation. Claude Vialade created the 10-hectare (25 acres) vineyard to match the perfect combination of soil, climate, and grape variety, to foster drought resistance. In doing so, they deliberately did not comply with appellation regulations and were labeled regional wines.

Muscaris, also created by Becker, is a white grape that crosses Solaris and Muscat. It is lauded for its aromatics, resistance to disease and drought, and high acidity. Maison Vialade has a Muscaris and a Marselan in their portfolio. “Using these grapes, we can reduce and eliminate the utilization of pesticides,” says Audrey Garcia, the assistant to the director of the parent company, Domaines Auriol.

The battlefront against climate change doesn’t only occur in labs. Winemakers protect against its effects in the vineyards by planting hedges, utilizing ponds and rainwater collection, and working with animal and bird species.

Anne and Jean Lignères of Château La Baronne in the Corbières Massif lean heavily on biodiversity. They planted trees and bushes between rows to create shade from the heat and host birds and animals that increase biodiversity. “We created ponds at the foot of hills to collect rainwater; subsequently, water birds and frogs quickly arrived,” says Anne. She explains the light pruning of their goblet-trained vines, saying, “we don’t cut the leaves on top; we only manage the canopy to prevent disease.”

Domaine Bernatas in Limoux is a newer venture of only four years, so brothers, Jérôme and Stéphane look to neighboring vineyards for a glimpse into the harvesting future. “Neighboring vineyards are generally picking 10 to 15 days earlier,” says Jérôme. “Last year, we began picking the third of September, but with the temperatures we had in July, we will be picking by August 20 to 25th.”

In Leucate, Mas des Caprices, a certified organic and biodynamic winery, has seen harvest inch earlier and earlier. They made fortified wines at their inception in 2005, when harvest typically began on August 25th. Now, they produce dry, still, and sparkling wines, and harvest starts around August 10th. Owners Mireille and Pierre Mann say they are lucky with their spot near the sea. “Thermic regulation from the east (marine) wind brings freshness and a nice salty taste. The area is less impacted by climate change than inland,” explains Mireille. She notes that even so, extreme heat can cause grillure (burn/dryness). Hence, they are adamant about soil preparation, leaving grass between the rows to make a mulch and only cutting if it takes strength from the vines.

Domaine Calmel & Joseph has a scattering of vineyards across multiple microclimates in the Languedoc. Micro-négoçiant Jérôme Joseph explains his methods: No irrigation to accustom the plant to develop its root system; Trees around the vines to capture water in the subsoil; increased canopy to develop photosynthesis and berry protection; avoid southern orientations and favor plots at altitude. “To anticipate the effect of climate change, we have made certain decisions,” he says. “We think it’s the better way, but there is no certainty in agriculture.”

The Languedoc accounts for around 33% of France’s organic vineyards, and there is a push for more to be organically or HVE certified. Some producers swear by the methods of biodynamics and permaculture to mitigate the effects of climate change.

Anne Lignères says that at La Barrone, working biodynamically creates a balance and preserves biodiversity. Plus, the soils are alive and retain more humidity. “To protect mother earth, we have to work with nature, not use it,” she says. La Barrone employs solar panels and has reduced its waste using lighter and easier-to-recycle materials.

In Limoux, Jérôme explains how biodynamics benefits the vineyards at Bernatas. Although the altitude in Limoux offers cool nights, they are still impacted by drought and higher temperatures than usual. “This year, we didn’t do any canopy pruning because the vines were struggling against the heat and the drought, and it’s not the moment to ask them to do more,” he says. When temperatures hit 39 degrees for two days, he sprayed yarrow and nettle to stimulate microcirculation and refresh the plant. “The idea is to send a message to go deeper in the ground to find water and all the nutrients they need,” he says.

Samuel Delafont, the man behind Maison S. Delafont in Cévennes, is a huge cheerleader for permaculture, which he claims allows for a more hands-off approach and a climate change remedy. Rather than sourcing water from lakes and ponds, he helps his vineyards absorb rainfall better. Like other winemakers, he leaves grass between rows so that the earth doesn’t become laden with mud which can cause mold, and also restricts water from getting deep into the soil. “It makes a sponge of 15-20 centimeters giving better water penetration in the ground,” he says. When he cuts the grass, he leaves it to turn into mulch to further prevent evaporation.

Working with trees, plants, animals, and insects in permaculture is essential. The trees mitigate CO2, offer shade, and release ions that coax the clouds to release water. “If you have a healthy ecosystem, then you have more humidity,” says Delafont. “The problem with the climate is that everybody has to work in a way that concerns biodiversity. The more people working this way, the bigger the impact.”