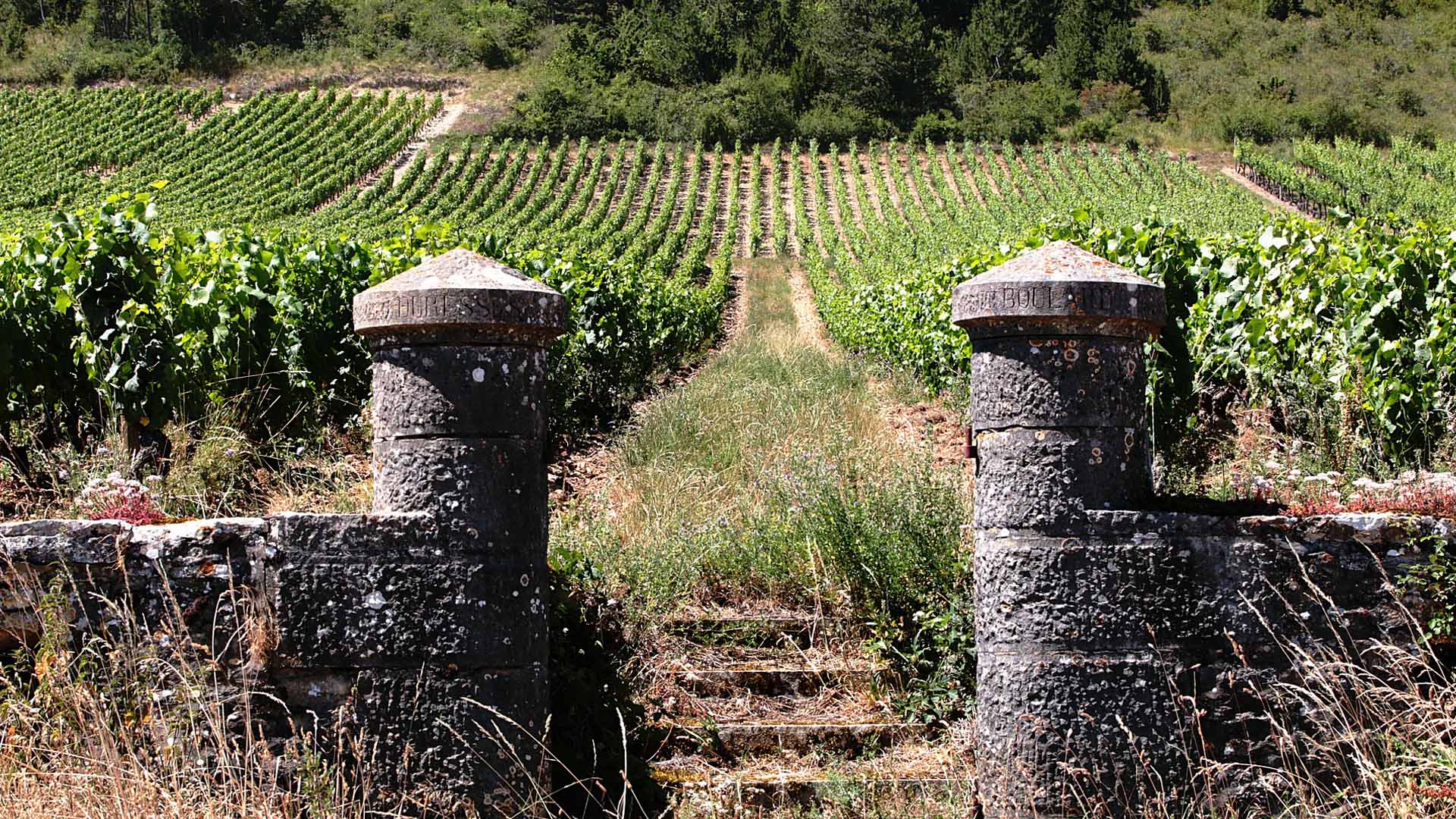 There is a deep reverence for Burgundy (aka “Bourgogne”). The complexity of the Burgundy wine classification system instills fear in even the most well-versed wine pros and reminds us of the words of William Shakespeare, “though she be but little, she is fierce.”

At 50 square miles and stretching from the northern limestone soils of Chablis, over the golden slopes of the Côte d’Or, to the monumental rocks of the Mâconnais, this region produces some of the most coveted and expensive wines in the world. While Burgundy is renowned for its terroir-driven winemaking approach, sloping hills, and collectible Grand Crus, it also produces quality wines that won’t break the bank.

In this guide, we focus on the history, climate, classification system, and the five main regions of Burgundy.

If These Clos Could Talk

The wine history in Burgundy dates back to around 50 BC when it’s believed the Celts were first producing wine in the region. Benedictine monks from the Roman Catholic Church took over after the fall of the Roman Empire and settled in Cluny. The Benedictines established one of the most prestigious domaines in Burgundy, Romanee-Saint-Vivant in Vosne-Romanee.

Cistercian monks broke away from the Benedictines two hundred years later and elevated the art of Burgundian winemaking. Taking vows of poverty, Cistercians believed that hard work brought them closer to God. They kept meticulous records while cultivating the rocky Burgundian slopes and created the first enclosed vineyard in 1336, Clos Vougeot. To protect the vines from animals and establish distinct ownership boundaries, clos (short stone walls) were constructed around the vineyards and are still visible today.

Following the French Revolution, vineyards on church property were confiscated and auctioned off to private owners. After several generations, the Code Napoléon came into effect, governing inheritances and requiring land to be divided equally among children. Today, as a result of the equal division law, it’s not uncommon for a Burgundian Domaine to have dozens of owners, with only a few rows owned by each individual.

Burgundy has over 100 appellations, divided into four levels of quality. The top plots are called climats. For comparison, a climat is most similar to a single vineyard designation on a new world wine.

The pinnacle of Pinot Noir and Chardonnay, Grand Crus are powerful and complex wines designed for cellaring. Displaying Grand Cru on the label indicates wines made from Burgundy’s top climats. There are 33 Grand Crus in the Côte d’Or, with 60% of production dedicated to Pinot Noir and 40% to Chardonnay. Grand Crus comprise 1% of the overall production in Burgundy.

Premier Cru wines are from special climats within a village. Often these sites are just inches from a Grand Cru. There are 640 Premier Cru climats, recognized as exceptional growing sites. Wine labels must include the words Appellation 1er cru contrôlée. Premier Cru wines represent 10% of the overall production.

Grapes that grow in a specific village or commune of Burgundy become village wines. Recognizable names on labels include Beaune, Givry, Nuits-St-Georges, and Pouilly-Fuissé. Forty-four villages produce 37% of the overall production.

Grapes that grow anywhere in Burgundy make regional wines. Labels specify “Bourgogne Blanc” or “Bourgogne Rouge,” depending on whether they are Chardonnay or Pinot Noir. Regional wines represent 52% of the overall production.

In Burgundy, Chardonnay makes white wines, and Pinot Noir makes red wines – period (with a few exceptions, which we’ll address shortly). Unlike Bordeaux, which has a reputation for blends, the focus in Burgundy is on varietal wines. Located in the central-east of France, Burgundy has five primary grape-growing regions.

Chablis is the furthest north of the Burgundian growing regions, and the only grape permitted here is Chardonnay. Located 62 miles north of Beaune, Chablis is closer to Champagne geographically and shares many characteristics, including a cool climate and chalky, white “Kimmeridigian” limestone soils. Lean in style with high acidity, bright minerality, and little to no oak influence. On a warm summer day, Chablis pairs well with oysters on the half shell.

In true Burgundian form, there are exceptions to every rule. One of these is that Chablis uses a different classification system developed for its unique and zesty Chardonnay.

Grand Cru Chablis: There is only one Grand Cru, but seven named plots of vines (aka climats) that make Grand Cru. On the face of steep south-southwest slopes, these vineyards are located north of the town of Chablis. Wine labels will show either Blanchot, Bougros, Les Clos, Grenouilles, Presuses, Valmur, or Vaudésir.

Premier Cru Chablis: There are 40 climats with this designation, comprising about 15% of the annual production in Chablis.

Chablis: These wines come from grapes grown on the limestone slopes near the village of Chablis. Most of the wines we see on our local shelves are in this category.

Petit Chablis: Produced from grapes grown in vineyards on either side of the river Serein. Delightful in their youth, with bright citrus notes and high acidity.

This region begins just south of Dijon, extends to the village of Corgoloin, and is home to 24 Grand Cru vineyards. Forming a patchwork on the eastern facing slopes of the Saône River, the Grand Cru vineyards begin at the village of Giverny Chambertin and extend south to Vougeot and Vosne Romanée. Pinot Noir comprises 80% of the production in Côte de Nuits, with the remaining 20% from Chardonnay.

In this region, vineyard holdings of the legendary producer Domaine de la Romanée-Conti‘s (aka “DRC”) include Romanée-Conti, La Tâche, and Richebourg. Prices for these wines and others from the region are often well into the thousands, with several bottles selling at auction for hundreds of thousands in recent years.

The Côte de Beaune gets its name from the medieval village of Beaune, which is the heart of the wine trade in Burgundy. Limestone-rich soils and sunny and easterly planted slopes result in a more decadent style of Chardonnay than those produced in Chablis. The Côte de Beaune is home to 7 of the 8 Grand Cru vineyards producing white wine, including Corton, Charlemagne, and Montrachet.

Other well-known Premier Cru wines from this region include Meursault, Pommard, Puligny-Montrachet, and Volnay.

Together the Côte de Nuits and Côte de Beaune are called Côte d’Or, or Golden Slope. Historically they are known as two of the most significant growing regions in France and are included on the UNESCO World Heritage List.

In this clip from A Closer Look at Meursault on SOMM TV, Elsa Matrot, winemaker at Domaine Matrot, talks about the types of soils found in Côte de Beaune.

The Côte Chalonnaise produces some of the best value wines from Burgundy between the towns of Chagny and Saint-Vallerin. This region has several prominent Village wines but does not have any Grand Cru vineyards. When the Dukes of Burgundy ruled the land, they kept their vineyard holdings close to Dijon. The southern regions of the Chalonnais and Mâconnais were rural and relegated to the peasants.

Givry in the center of Chalonnaise has over 13 different types of soil. The soil may change from plot to plot, or even within each climat, highlighting why terroir is of such importance in Burgundy. The winemakers in this region take great pride in their attachment to the terroir. They certainly know their soils, with some vineyards held by the same families since the 17th century.

Two villages in this region go against the standard rule and have plantings other than Chardonnay and Pinot Noir. Bouzeron, in the northern part of the region, is the only appellation planted entirely to Aligoté. These wines have either Bourgogne Aligoté or Bourgogne Aligoté Bouzeron on the label. Aligoté is floral, with notes of peaches and citrus, with fresh acidity and hints of salinity on the palate. Delicious when paired with fish and shellfish.

Another village going against the grain is Rully. Since the 19th century, this village has produced Cremant de Bourgogne, white and rosé sparklers in the traditional method.

Mâconnais is the largest and most southerly region of Burgundy. It sits between the towns of Tournus and St. Veran and has a warmer climate due to its proximity to Southern France influence from the Mediterranean. As a result of the warmer weather, the harvest process begins a full two weeks earlier than in Chablis. The warmer climate results in richly structured Chardonnay (which is 80% of production) with notes of stone fruits, honeysuckle, and quince.

The most well-known area in this region is Pouilly-Fuissé.