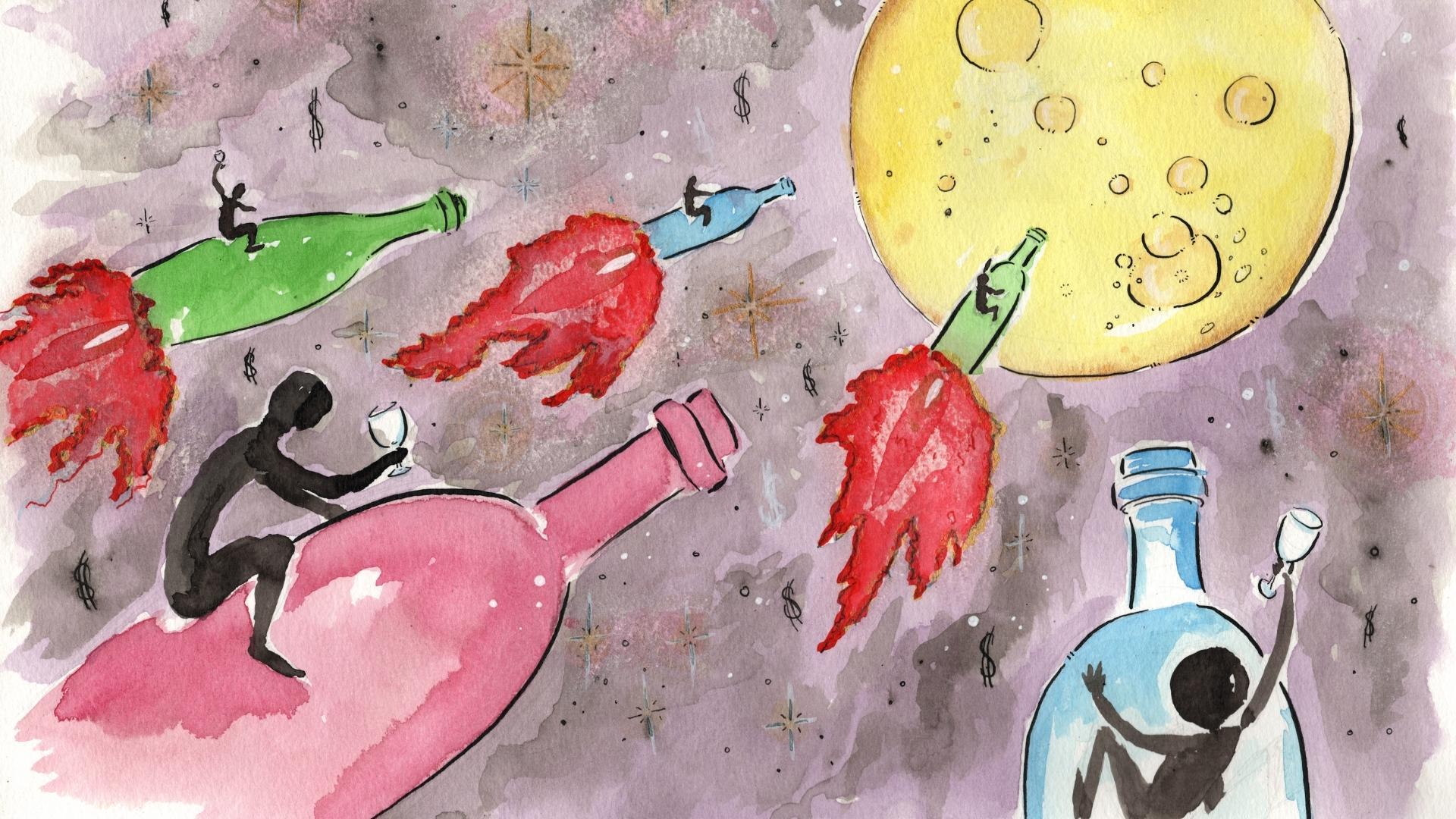 Buy low. Sell high. That is wine investing in a nutshell. But which wines sell for the highest of the high? We’re here to answer that exact question. After a bit of digging on Wine-Searcher.com, we found the ten most expensive wines in the world.

So, what makes this Pinot Noir special? It checks every box that a wine investor could dream of. Legendary terroir? Check. Miniscule supply? Check. Universal praise, including multiple perfect scores from wine critics? Check and check.

Domaine Leroy Musigny Grand Cru has treated wine collectors well. According to Liv-ex, every vintage since 2000 has appreciated between 361.8% and 2,848.5% over the last five years.

As the price continues to skyrocket, we wondered, “What else could you buy for a cool $41,368?” Here are some options:

Many prominent wine estates have existed for centuries. Not Domaine d’Auvenay. It was founded in 1988 in Saint-Romain. So, how did it become a darling of the investment-grade wine world? Lalou Bize-Leroy. The owner and manager of the estate is also the driving force behind the legendary Domaine Leroy.

Domaine d’Auvenay has ten acres of grand cru Pinot Noir and Chardonnay spread across a handful of vineyards. (By comparison, Domaine Leroy has 54 acres.) The resulting wines are intense, powerful, and infinitely complex. After trying the most recent release of this chardonnay, William Kelley wrote, “To my palate, these are simply the greatest white wines produced in the world.” Unsurprisingly, he gave it a perfect score.

Domaine d’Auvenay strikes again. (It won’t be the last time, either.) The Chardonnay has earned a reputation for immense aromatics that evoke stonefruits, honeycomb, wildflowers, and freshly whipped cream. Add in a full body, lavish texture, and striking purity, and it’s easy to see why wine lovers pay top dollar for this white wine.

Wines of this price must be held to the highest standards. Domaine d’Auvenay Criots-Bâtard-Montrachet Grand Cru meets those standards and then some. Many have called this Chardonnay among the best in Burgundy. Ten consecutive perfect scores from La Revue du Vin de France reinforce why.

If you were to make a Mount Rushmore of investment-worthy wineries, you’d be hard-pressed to leave off Domaine de la Romanée-Conti. The estate has long been the face of Burgundy with its revered wines, glowing critical reviews, and astronomical demand. It’s also the only domaine in Burgundy to make wine exclusively from grand cru vineyards.

The lengths people are willing to go to own Domaine de la Romanée-Conti was underscored at a 2018 Sotheby’s auction. A 73-year-old bottle of the Pinot Noir sold for a jaw-dropping $558,000. Not only was that a world record, but the final price tag was also 17 times higher than the original estimate of $32,000. To prove that it was not a fluke, another bottle of Domaine de la Romanée-Conti from the same vintage sold for $496,000 moments later.

Domaine d’Auvenay claims its third spot on this list with this Chardonnay from Bâtard-Montrachet. The secret? In the words of William Kelley, “Lalou Bize-Leroy is making wines not for the present, but for eternity.” With an aging window of 20 to 30 years, this gem can be enjoyed by generations of wine lovers.

Domaine d’Auvenay Bâtard-Montrachet Grand Cru makes its presence felt with tangy acids, a fleshy body, and a smooth, honeyed finish. Critics have compared it to a more dynamic version of the estate’s Enseignières. (A single bottle of Enseignières retails for around $10,313.)

If you’re in the market for “cheap” wines from Domaine d’Auvenary, here are your most budget friendly options:

Georges Roumier is a rockstar in the fine wine industry. The mild-mannered winemaker has garnered legions of admirers willing to pay top dollar for his reds and whites. In fact, this Pinot Noir is just one of four wines from the estate that retails for more than $5,000 per bottle.

This full-bodied red wine with hints of spice and salinity has a long track record of appreciation. (We’re not just talking from fans here.) Every vintage this century has returned between 120% and 795.8% over the last five years. While sure things don’t exist in investing, Domaine Georges Roumier Musigny Grand Cru might be as close as it gets.

When people think of white Burgundies, they think of Domaine Leflaive. The Puligny-Montrachet estate has 13 acres of grand cru vineyards that date back to the 18th century. Wines from Montrachet command the steepest price, in part, because they come from the smallest of the Leflaive holdings.

Demand for Domaine Leflaive Montrachet has soared in recent years. This medium-bodied Chardonnay with a svelte finish has seen nine out of its last ten vintages return 100% or more since 2017. The exception: the 2015 vintage, which has appreciated a mere 93.7%. (Please note the dripping sarcasm.)

Every wine on this list comes from Burgundy. The lone outlier is Egon Müller Scharzhofberger Riesling Trockenbeerenauslese, and with good reason. This Riesling has long served as Mosel’s gold standard for great wine. As wine critic Stephan Reinhardt wrote, “Wines of Egon Müller are rare and terribly expensive, but worth almost every sin.”

This white wine ranks as the top-scoring German wine among critics, with the last two vintages earning perfect scores from Robert Parker’s Wine Advocate. That’s not all. Its best vintages have lifespans of more than 70 years, making this Riesling borderline eternal.

Domaine Georges Roumier Échézeaux Grand Cru is the new kid on the block. The Pinot Noir debuted in 2016, and collectors haven’t stopped clamoring for it since. It melds notes of blackberries, orange zest, and wildflowers with refreshing acids and melt-in-your-mouth tannins. Meanwhile, the cuvée has a charming personality that complements the muscularity and richness of the body.

Compared to other wines on this list, though, Domaine Georges Roumier Échézeaux Grand Cru lacks critical credentials. The highest score it has ever received was a 96-point rating, both times from Jasper Morris. So, what’s driving up the price? One reason is the microscopic quantity. The 2017 vintage only produced 700 bottles. By comparison, Egon Müller produces four times as much Scharzhofberger Riesling Trockenbeerenauslese each year.

Buying another label from Domaine Leroy doesn’t mean you’ll sidestep premium prices. The estate accounts for five of the wines on this list. One could even argue that its wines are more investment-worthy that those of Domaine de la Romanée-Conti. As wine critic William Kelley wrote, “It’s a challenge to know where to place these wines on our scoring scale in a way that does justice to the domaine’s internal hierarchy.”

The recent string of vintages highlights the magic of this Pinot Noir. The 2015 showcased concentration. The 2016 led with energy. The 2019 was round and textured. The 2020 was multi-dimensional. All four earned perfect scores from Robert Parker’s Wine Advocate.

Burgundy has a stranglehold on the fine wine market. At least when it comes to the ultra-expensive stuff. It notched nine of the top ten spots on this list, with Mosel, Germany, stealing a single spot.

The highly artisanal production and ultra-small quantities make Burgundy ripe for wine investing. It should come as no surprise Burgundy is also the best-performing wine region over the last five years, according to Liv-ex. To add some Burgundies to your wine portfolio, visit Vinovest today.