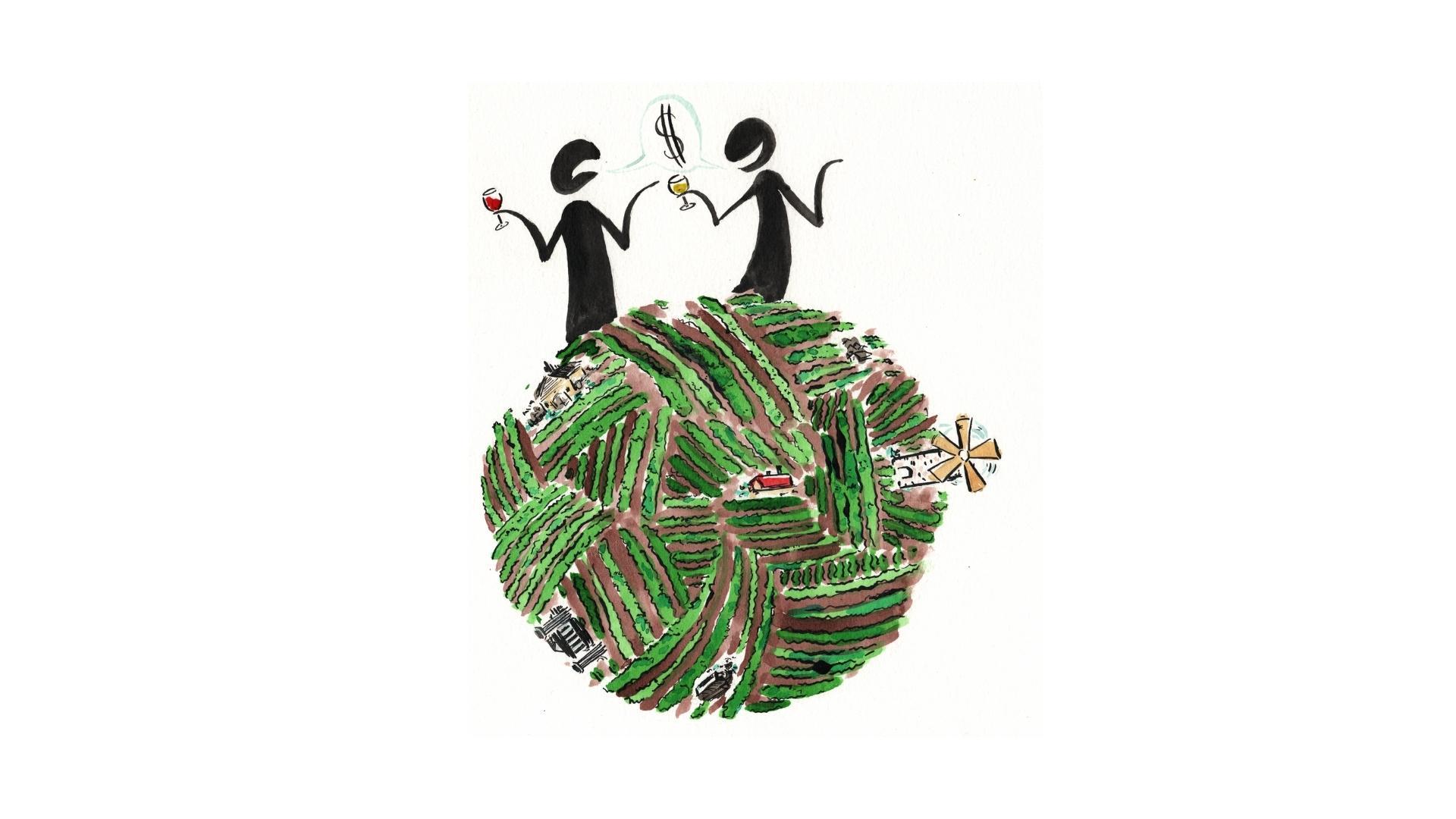 “What wine should I invest in?”

It’s a question I get asked all the time, and with good reason. You want to invest your money in the right place. So, I set off to make this cheat sheet of the most investment-worthy wineries from each region.

The problem? It’s really hard to pick only one winery! If you live, breathe, and drink wine, this list is bound to ruffle some feathers. That’s why I’ve included postscripts below each section to mention wineries that barely missed the cut.

Without further ado, here are the most investment-worthy wineries from every wine region.

Pétrus has an exceptional reputation. Under the guidance of Edmond Loubat and later Jean Pierre Moueix, the Pomerol estate achieved near-mythic status. Wine critic Robert Parker Jr. even heralded its 1947 vintage as “the wine of the century.” Meanwhile, Decanter’s Serena Sutcliffe wrote, “In terms of prestige, excellence and standing, it doesn’t come much bigger or better than Pomerol’s finest.”

Each year, Pétrus produces a mere 5,000 cases of its grand vin composed of 100% Merlot. The winemaking practices are legendary, with every step done by hand and with immeasurable care. The result: a magical wine with a $3,715 price tag. That’s higher than first growths such as Château Lafite Rothschild and Château Margaux.

That’s not all. Pétrus routinely returns double digits on investment. For instance, the 2009 vintage has returned 38% of the last year, and 109.5% over the last five years.

If you were making a Mount Rushmore of investment-grade wines, Domaine de la Romanée Conti (DRC) would be a no-brainer. The small yet mighty Burgundy estate checks all the boxes. That includes:

What do all these factors add up to? Some of the most expensive wines in the world. Take DRC Montrachet Grand Cru, for example. A single bottle will set you back more than $12,000, while DRC Romanée Conti Grand Cru retails for twice that.

Those figures are growing fast. Every release of DRC Romanée Conti Grand Cru this century has appreciated at least 40% over the last five years. Some of the top vintages, including 2003, 2009, and 2012, are up more than 110% during that same span.

Salon is the ultimate investment-grade wine. The legendary Champagne is only made in the finest vintages to ensure immaculate quality. Since 1921, consumers have seen Salon released a mere 36 times, or roughly once every three years.

That’s not all. Production is microscopic. Salon releases roughly 60,000 bottles per vintage. By comparison, Louis Roederer produces 3.2 million bottles, and Veuve Clicquot produces 19 million. It’s no wonder that Salon returns have looked like this over the last five years:

My apologies to: So many Champagne houses. Champagne is having a moment, so it was tough omitting dozens of worthy names. That includes Dom Pérignon, Krug, Taittinger, Jacques Selosse, Louis Roederer, Billecart-Salmon, and Charles Heidsieck.

When people think of Hermitage, they think of Domaine Jean-Louis Chave. A family winemaking dynasty that stretches back five centuries, the estate has set the standard for quality in the Rhône. In the words of author Andrew Jefford, “In no other of France’s great terroirs is the largest individual landholder so deeply rooted in time and place, so supremely competent, and so modest a custodian of the insights and craftsmanship of the past.”

While the proportions of Chave blends change yearly, consummate perfectionism does not. Every wine is made from scratch with meticulous farming, minimal new oak, minimal intervention, and zero filtering. These techniques ensure the boundless complexity and aromatic finesse that made Jean-Louis Chave world-famous.

Perhaps the most celebrated offering is Jean-Louis Chave Hermitage, a full-bodied Syrah with a dazzling bouquet. Since 2009, it has notched six perfect ratings from critics. Eleven more times it has flirted with perfection, scoring a 98-point rating or higher. As Robert Parker put it, “Anyone who loves Hermitage and has a cold cellar should be lining up to get a few bottles of this beauty.”

My apologies to: the many Rhône estates with reams of 100-point ratings, including, E. Guigal, M. Chapoutier, and Château Rayas.

Joseph Phelps Insignia was the first proprietary red Bordeaux-style blend in California. Opus One was the first California cult cab sold at La Place de Bordeaux. However, Napa Valley would not be what it is today without Screaming Eagle.

Screaming Eagle is the epitome of cult cabs. The brainchild of Jean Phillips and Heidi Barrett, the Oakville wine debuted in 1992 to little acclaim. It wasn’t until Robert Parker came to town that things changed.

On his first visit, Parker gave the first vintage a 99-point rating. The following year, he awarded Screaming Eagle a perfect score. Combine Parker’s seal of approval with minuscule production (600 to 700 cases per year), and you have the ultimate investment-grade wine. As a result, a single bottle of the 1992 vintage sold for $500,000 at a charity auction in 2000.

My apologies to: Harlan Estate, maybe. Screaming Eagle was an easy choice, but Harlan Estate was a clear second place. Other attention-worthy names include Realm Cellars, Hundred Acre, Dominus, Opus One, Joseph Phelps, and Continuum.

Piedmont was a photo finish. I flip-flopped multiple times before settling on Gaja. The deciding factor: Angelo Gaja.

As wine critic Tim Atkin put it, “Angelo is often described as the man who dragged Piedmont into the modern world.” He did so by adopting various practices from France and bringing them to Italy. He started with green harvesting in 1961. A few years later, he introduced:

Gaja’s constant innovation proved invaluable. He revolutionized winemaking in Italy and almost single-handedly brought it into the modern era. Today, critics call Gaja the king of Barbaresco and compare his winery to Château Lafite-Rothschild and Krug.

My apologies to: the people of Barbera d’Asti, Barolo and Barbaresco. My hands were tied. I would also like to issue my sincere condolences to Giacomo Conterno, Bruno Giacosa, Roagna, and Giuseppe Rinaldi.

The wine industry is obsessed with tradition. Tenuta San Guido makes this list for putting tradition on its head with Sassicaia. First released in 1968, Sassicaia was the first Tuscan wine to use non-native grapes in its blend. (Think Merlot, Cabernet Sauvignon, and Syrah.)

When Tenuta San Guido debuted it, the reception was lukewarm. Light local wines were customary in Tuscany, so this bold and complex red wine was too much to handle. Oh, how the times have changed. Sassicaia has earned five 100-point ratings over the years, with critics routinely praising its immaculate balance and enticing aromas. The best part? Sassicaia has a 0.75 price-to-score correlation, meaning those glowing critic scores translate to handsome returns for collectors and connoisseurs alike.

My apologies to: Chianti and Brunello di Montalcino. Yes, the entire regions! An extra serving of apology to other Super Tuscans, including but not limited to, Redigaffi, Solaia, Ornellaia, Tignanello, and Masseto.

Penfolds is the most iconic winery in Australia. Grange is the reason why.

In 1931, Penfolds’ chief winemaker Max Schubert traveled to Europe to learn about winemaking practices. Inspired by his trip, he began making Bordeaux-style blends when he returned home. The problem? Schubert’s first batches were widely panned. It was only after years of tinkering that he perfected Grange.

Penfolds began releasing Grange vintages commercially in 1952. The red blend set the standard for fine wine in Australia, something that it continues to do today. In 2001, Grange was listed as a South Australian heritage icon. A few years later, Wine Spectator named it one of the Top 12 Wines of the 20th Century.

My apologies to: No one. I don’t have any qualms about this selection.

There is no shortage of investment-worthy wineries out there. But, when it comes to wine investing, there’s only one place to go – Vinovest. Vinovest has more than 130,000+ registered users, making it the go-to choice. Start your free account today and discover why Vinovest portfolios get better with age.