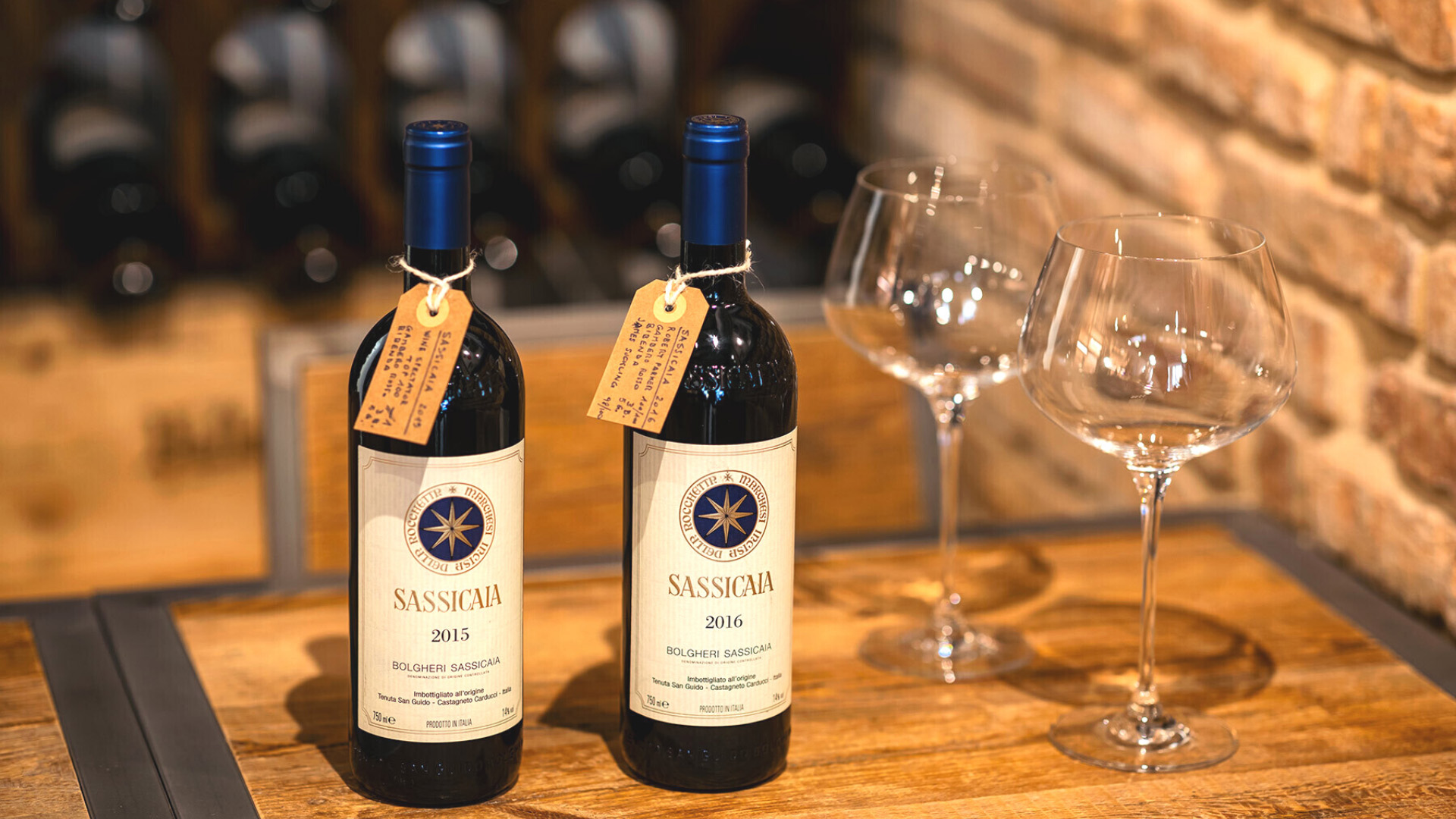 When it comes to wine worth investing in, bottles from classic regions such as Bordeaux, Burgundy or Champagne often jump to the front of the line. The right investments from those regions are unbelievably popular. But it’s time to shed some light on the best game in town right now — Sassicaia from Italy.

The Super Tuscan wine has a typical ruby red color, and velvety tannins complemented by spice flavors and black currant aromas. It’s juicy with a taste of black fruit and a hint of mint freshness on the palate. In other words, it’s delicious.

A Brief History of Sassicaia

The ultimate Super Tuscan, Sassicaia, is ironically an Italian take on a classic Bordeaux style wine composed of Cabernet Sauvignon and Cabernet Franc. The story of Sassicaia wine began in the 1940s when Mario Incisa della Rocchetta moved to the Tenuta San Guido Estate in Tuscany.

In the beginning, Rocchetta was making mostly Cabernet Sauvignon for private consumption. But in the 1960s, Rochetta’s son Nicolo, and nephew Piero Antinori, convinced Mario to go commercial. With the help of oenologist Giacomo Tachis, the 1968 vintage turned out to be a hit.

Today, Sassicaia wines are also some of the best performing on the secondary market. In short, they have been an investor’s dream.

Everyone seemingly wants Sassicaia right now. Even celebrities like Beyonce and Lebron James have been seen drinking it. The best scoring vintages are 2013, 2015, 2016, and 2018. However, almost all recent vintages of Sassicaia carry positive momentum.

Sassicaia is outpacing its French competitors for one simple reason; some top-tier French wines have priced themselves out of accessibility for the average consumer. Subsequently, we see a lot less trading volume. Some top Burgundies are so rare that collectors simply don’t move them on the secondary market very often.

With Sassicaia, its prices are still accessible. There is a remarkable consistency to the performance of most vintages. These are some of the best performing vintages over the last five years:

Returns slow down slightly after 2016, but not because they’re bad vintages. The 2018 vintage received excellent scores and will hit the start of its ideal drinking window around 2025. Given time, it’s a great early play based on the historical performance of its predecessors.

The 2015 vintage is trading impressively right now for two reasons. First, it was named Wine Spectator’s wine of the year in 2018. It also hit its drinkability window in 2018. When it comes to investing, it’s entirely about the returns. The 2015 vintage’s return of more than 100% over five years handily beats the S&P 500’s annual average. Who doesn’t love 21.6% annualized returns? The wine is drinking well and will continue for decades. As people consume more, supply and demand will take over, driving up the scarcity of this highly coveted wine.

The same could be said for the 2013 vintage, especially since the drinking window for the 2018 vintage is still a couple of years away. Proper diversification of capital amongst these three vintages could set investors up to play on current trends while also investing down the road.

Sassicaia is favorable for its liquidity as much as its returns. There are plenty of top-end wines that are more expensive, but fewer collectors can afford them, meaning it’s harder to sell your investment later on. Sassicaia is right in the sweet spot in terms of pricing, making it easier to sell when the time is right.