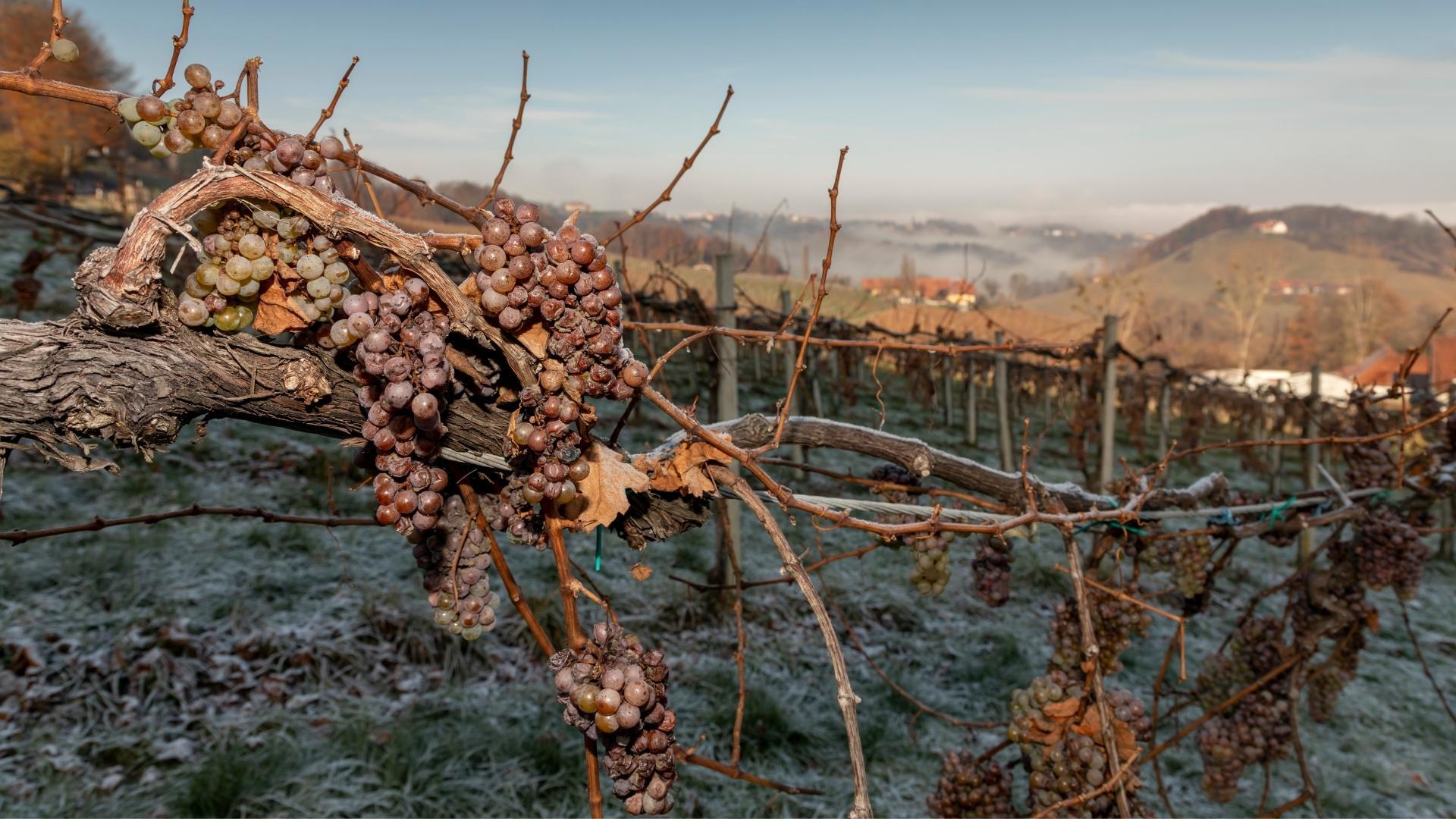 In 1991, a single moment launched the Canadian wine industry onto the global scene. Inniskillin Winery won Grand Prix d’Honneur for its Icewine by Karl Kaiser at the Vinexpo in Bordeaux, France. This prestigious award shed new light on Canadian wine. Suddenly, the world’s eyes were on Canada for this distinct and luxurious wine style.

Canadian Icewine regulations govern that temperatures must remain at -8 degrees Celsius before Icewine harvest can proceed. The region’s extreme continental climate allows for the consistent production of Icewine, vintage after vintage.

In 2000, Canada’s Icewine further solidified its global fame when George Riedel produced the first Icewine glass in partnership with Inniskillin Winery. The mysterious and exciting new style reached recognition from several wine-loving countries as a premium, luxurious, and sweet wine. During its nearly three-decades climb to global success, Canadian Icewine reportedly accounted for a whopping 50% of all Canadian wine export sales.

Sadly, as of 2020, a slew of pandemic-related challenges led to a catastrophic blow for the nation’s wine industry. With port and border closures, carrier complications, and tourism depletion, wineries struggled with dwindling export and cellar door sales. Through multiple lockdowns, many producers struggled to stay afloat. Consequently, the overall production of Icewine drastically diminished.

The world’s largest exporter of Icewine, Pillitteri Estates Winery, reveals their Icewine production was approximately 80% less in 2021 versus the first year of the pandemic. Additionally, the number of winery tourists in 2020 dropped from 200,000 to 20,000.

“We’ve adjusted to the marketplace,” says Jamie Slingerland, Pilliteri’s Director of Viniculture. “We still have product continuity and are still active in export markets, mostly through onsite agents. But we’ve changed our business plan to focus on selling to locals through our front door.” Not an easy feat in a market where domestic sales remain small. While Pillitteri was previously well-positioned in the export market, 2020 and 2021 left them nothing to reinvest in their company.

When asked how Pillitteri is approaching current pandemic-related obstacles, Slingerland replies, “through online marketing, and finding other sales avenues such as farmers markets. We’ve found ways to stay active in the export market, even if it’s through a virtual presence.”

He goes on to add, “It’s family that is behind our winery’s success. The employees are our sons, sons-in-law, nieces…their livelihood depends on the success of harvesting Icewine. That’s what I think about when I’m picking grapes in the middle of the night when it’s -15 degrees Celsius with 50-kilometre winds while snowing,” describing this year’s harvest.

The country’s regulatory bodies are working hard to re-introduce the allure of Canada’s flagship wine. Magdalena Kaiser, Director of Public Relations – Marketing & Tourism for Wine Country Ontario, reflects on the country’s Icewine success. “We consistently make a high quality, special sweet wine year after year, where few countries have ideal conditions to do so.” She continues, “it’s luscious, concentrated and pure. Picking grapes in the middle of winter, often in the middle of the night, there’s a romance to it.”

Wine Country Ontario portrays the prestige of Icewine as more than just a dessert wine. It’s luxurious to experience on its own but is also a flexible food pairing. The Association has also taken renewed marketing approaches on social media by accentuating Icewine in high-end cocktails, a trend that seems to be catching.

In addition to her role with Wine Country Ontario, Magdalena Kaiser also happens to be the daughter of winemaker Karl Kaiser. “It’s something to be proud of,” she says when asked how much it means to have Icewine as part of her family legacy. “Icewine put Canadian wine on the map, and it’s still relevant today. I’m fortunate to be a part of the journey.”

The pandemic has left a tremendous impact on Canadian wineries. Fortunately, Canadian Icewine pioneers have rooted a monumental presence. Producers across the country continue to win awards from the most esteemed wine competitions. Despite rocky times, the nation’s famed ‘liquid gold’ will continue to be more than just a catapult. It’s indeed the heartbeat of the entire Canadian wine industry.