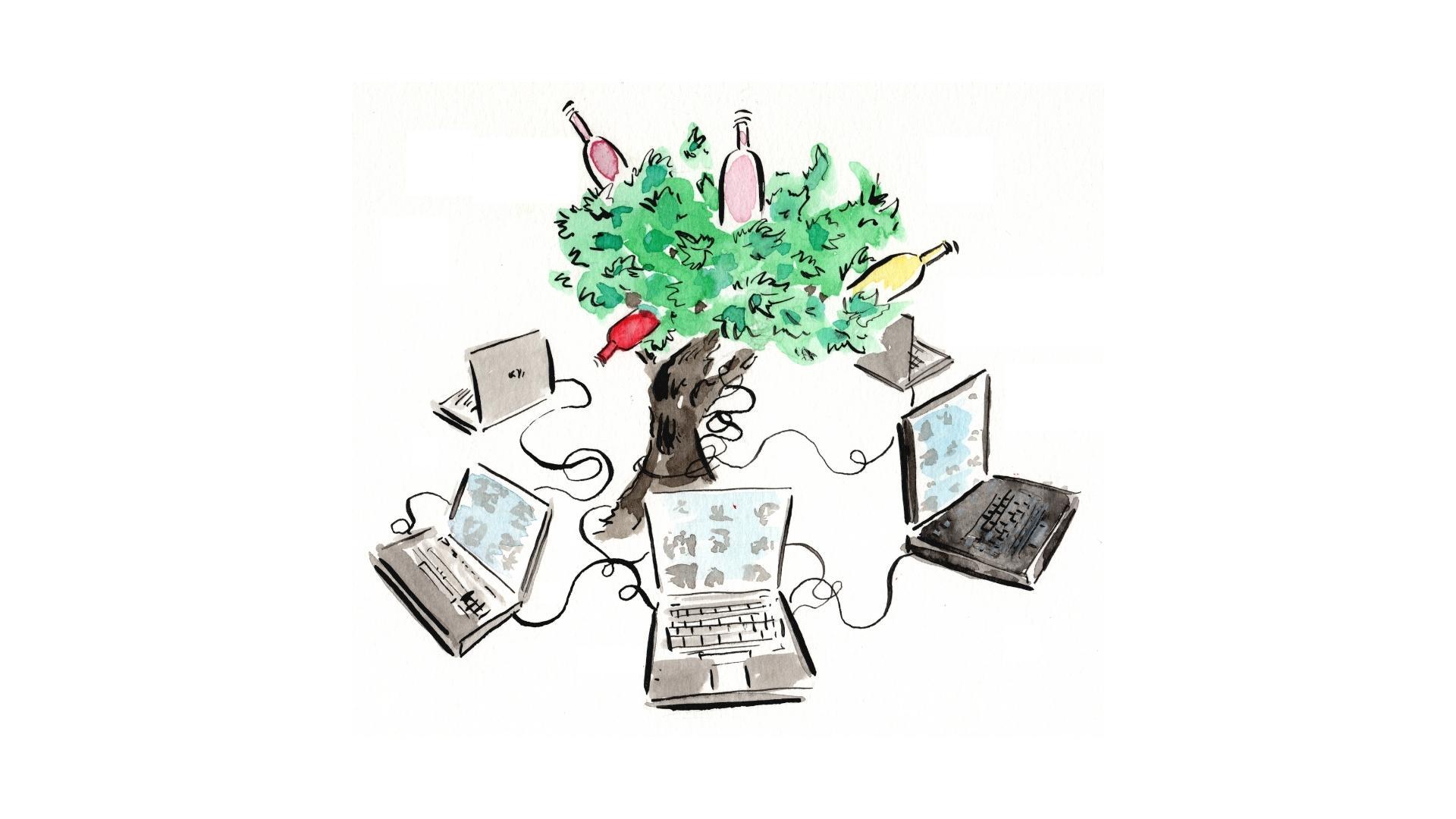 Across all industries, Zoom fatigue is real. It’s more than a meme and equally valid among the increased digitization of wine culture, particularly with virtual wine tastings.

Of the $7.2 billion in revenue from direct-to-consumer (DTC) wine sales in the U.S., 23% happen online. That’s $1.8 billion, according to 2022’s DTC Shipping Report. The value of the wines being ordered is up too. Last year, the industry saw the largest year-over-year increase in average price per bottle shipped, a 11.8% rise to $41.16 a bottle.

Pinpointing the precise motivation of purchases made online is notoriously challenging. Still, many winemakers point to their virtual wine tastings and experiences as a direct source of e-commerce growth. Perhaps more importantly, the strategy is a way to reach and retain new customers who would never make it to wine country in the flesh.

“Two percent of our revenue came directly from virtual wine tastings last year,” says managing director of Brooks Wine, Janie Brooks Heuck. “And through those tastings, we also met many people who never would have heard of us otherwise.”

Virtual reality is becoming a permanent part of winemakers’ business plans in ways that wine lovers are responding well to. In a world that’s opening up again, we reached out to winemakers and industry pros to find out what is working and how virtuals have evolved since March of 2020. Read on for their insight.

Ramon Escobar co-founded Chufly Imports with Tealye Long in 2013, focusing on wines from Lebanon, Bolivia, and Mexico. Their goal was to support wine-growing communities in challenging economic circumstances and inspire adventurous wine lovers to discover these unexplored terroirs. When the pandemic hit, Escobar says they doubled down on their mission.

“We did our first virtual experience in May of 2020 with Maydan, a Michelin-star restaurant in D.C.,” Escobar says, explaining the participants picked up food and wine at Maydan and went home for the virtual tasting.

The response was outstanding; reorder rates of people who participated in the tasting were double that of those who did not. Chufly quickly developed tastings where he and, when relevant, a partner, share stories of the winegrowers and makers as much as the wine’s quality. Tastings start around $75 and include full bottles of wine.

As the world cautiously returns to in-person tastings, Escobar continues to see incredible interest in virtuals. In particular, ones that support nonprofits such as Rainforest Trust, La Cocina, N Street Village, and Pencils of Promise. The resonance Chufly has found by aligning themselves with philanthropic missions isn’t surprising. According to a recent study, 68% of consumers say they increasingly purchase from brands positively impacting the world.

“As a company founded to help fix decades of failed global development efforts, we think about impact at every level,” he says. “This virtual model allows us to donate a third of the event ticket to our nonprofits while also providing a unique opportunity to engage supporters. It has allowed us to also grow our followers without buying ads with Zuckerberg and Facebook.”

Brooks Wine has made its name for more than 20 years by creating exquisite organic, biodynamic wines in the Willamette Valley that give back.

Heuck dove into virtual wine tastings immediately when companies and individuals approached her in the first weeks post-shutdown. These days, the smaller group tastings with friends have gone away, but two other models have thrived.

“We have found that many companies aren’t returning to the offices full-time, or at all,” Heuck says. “But they need to maintain their connections.”

She has created five tasting models for her corporate customers—many of whom opt to return more than once. The options range from regional overviews to wine and food pairing classes with local vendors (including one specific to chocolate) to party boxes with biodegradable and compostable favors. Another option includes a blind tasting of single-vineyard Pinot Noirs, covering terroir, clones, and elevation. Prices start at $78 per person and include full bottles of wine (sometimes several).

Beyond Brooks is a monthly collaboration series with focus on individual wine consumers. It incorporates likeminded artisans for tastings that, Heuck says, are designed to “intrigue, inspire, and make an impact.”

In March, Brooks partnered with Kiss the Ground, a 1% of the Planet partner and regenerative agriculture nonprofit that receives a portion of Brooks proceeds. Tasting participants receive two bottles of Brooks wine, an indoor herb starter kit, gardening supplies, and a webinar with Heuck and Kiss the Ground’s co-founder Ryland Engelhart.

“We’ve had incredible interest in additional tastings this year, and we see virtuals as a way of reaching and connecting with a different group of people moving forward,” Heuck says.

Et Fille Brings Everyone to the Table

During the pandemic, Et Fille Wines in Oregon was able to leverage virtual tastings to fulfill a long-standing goal.

“We only produce 2,500 cases a year,” says Jessica Mozeico, president and winemaker at Et Fille. “We’ve been around for 19 years, and before the pandemic, we were about 50% DTC [direct-to-consumer]. Now we’re at about 75% DTC, and I’d like to stay there.”

Most smaller wineries prefer to sell DTC because the revenue doesn’t go to middlemen. However, they also want to sell a portion on the market as a passive form of marketing and advertisement.

“It took people becoming more comfortable with getting things shipped to their home to get us there. Virtual tastings were a huge catalyst for that,” she says.

As with Brooks, the initial interest in family and friend virtuals has dissipated. But Mozeico says that wine club members and companies are just as invested.

“For wine club members, they want information on the wines, how they were grown and aged,” Mozeico says. “But for corporations, I see something else happening, and it’s really interesting. We’re getting a lot of companies who are using these virtual tastings to stay connected with each other, and I find that the most successful ones use it as a way to level the playing field. At company parties, no one will see the boss admitting they don’t know something. But here, we often have a CEO saying that their knowledge is a one or two on a scale of one to 10. It’s a huge ice-breaker.”

She also notes that partners are invited, and participants love seeing each other’s homes, pets, and family members during the tastings—experiences they’d never have access to otherwise.

Some wineries, meanwhile, admit that their Zoom fatigue is insurmountable.

“At one point, our winemaker [Emily Hodson] was doing four virtual tastings a week. At a certain point, she was over it,” says George Hodson, general manager of Veritas Wines in Afton, Va., and Emily’s brother. “But we knew that the virtual experiences were driving e-commerce, which hit an all-time high watermark during the pandemic.”

The team curtailed their virtual commitments initially and have figured out how to bring everything that makes a virtual tasting so compelling to their on-site tasting experiences.

“The great thing about virtual experiences for everyone is that anyone can suddenly have access to a very top-level person,” Hodson says. “When you come to the tasting room, you’re typically interacting with the tasting room staff, who are wonderful but don’t always have that same in-depth knowledge of every wine, its terroir and the way it was aged.”

Now, they offer virtual tastings at the winery. A flight of four wines is $15, and a reserve flight is $25. Each tasting comes with a video of Emily explaining each wine, and visitors can watch on their own time as they enjoy the wines.

“It’s a win for all of us,” Hodson says. “Visitors love it, allowing Emily to focus on winemaking.”

The pandemic has provided ample opportunities to social media influencers, sommeliers and writers eager to explore the virtual world with wineries who may want to leverage the space without conducting the tastings themselves.

Take Nia Ruth, who began hosting virtual tastings when she launched her wine club in the fall of 2021. Each month, Ruth features a producer and introduces participants to the wine. Both she and the winemaker present the story behind the label. She encourages buy-in from her followers on Instagram through cross-promotions, discount codes and other perks at in-person tastings.

“The feedback from wineries has been incredibly positive,” Ruth says. “They get their wines into the hands of consumers in parts of the U.S. they don’t typically reach, and the tastings forge real relationships between my members and each winery.”

Others, like Hank Zona, a writer and events specialist, have teamed up with wineries and community organizations to raise awareness for both and cross-pollinate their core supporters.

“The biggest was a 57-case drop to more than 200 households with an estimated 550-600 participants,” Zona says. “All told, the events raised more than $50,000 for community organizations and supported small businesses. What I’m most proud of, though, was someone from my community who said to me, ‘you have no idea how important these monthly events were during the pandemic. You created something fun with a sense of community that people could look forward to when we needed that the most.”

Some larger online wine clubs and websites like WTSO.com see how wine lovers are turning their tastings into a hybrid virtual and in-real-life party.

“We have tastings multiple times a month,” says Julie Blount, WTSO’s executive director of customer service and marketing. “Over the pandemic, we have seen how people have started not just showing up with a partner, but with an entire dinner party. We see entire groups of friends coming together and attending our virtual tastings. It has become a way to be social—alone or in a group—while enjoying wine and learning something.”

Indeed, more and more of us are turning to virtual zooms and classes to learn. Learning online became normalized for everyone K-12 and beyond. For all of us, self-investment and self-care often now happen online; Coursera alone saw a 444% increase in enrollments throughout the pandemic, with more than 50 million people signing up to learn something.  The pandemic feels like it’s coming to an end (but it’s felt like that before).

But there is still an enormous opportunity to engage people worldwide who want to reconnect with each other, learn about wine, or support a cause—or both—but can’t, won’t, or don’t want to travel to do so. With a little imagination and insight, winemakers and wine lovers can leverage the new normal to create a delicious and rewarding virtual space for learning and connection.