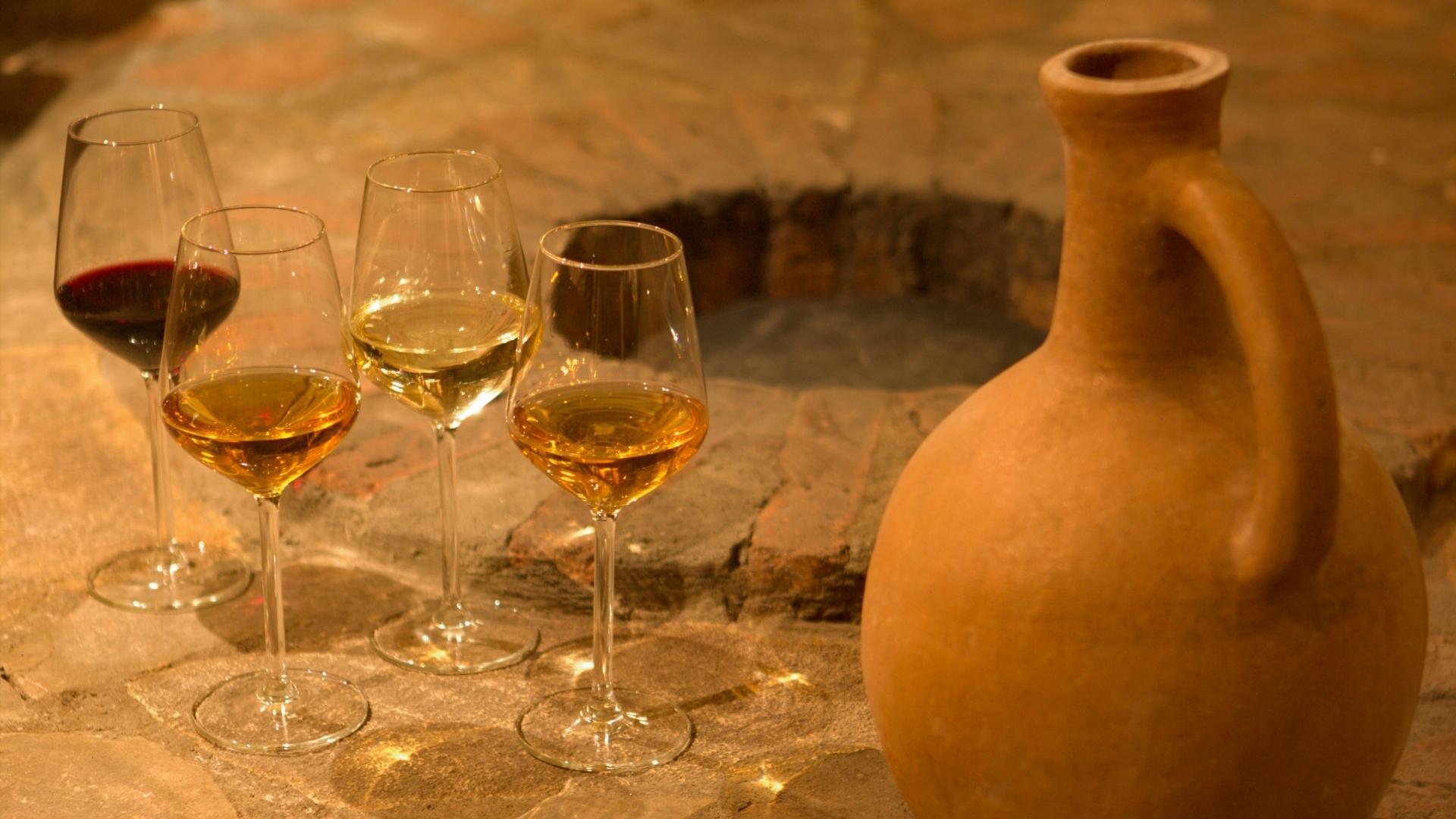 Image courtesy of Wines of Georgia

For the past few years, orange wines have become increasingly trendy. Most enthusiasts have accepted the skin contact wines for what they are: unique, sometimes funky, but always refreshing and finishing with an undeniable grip and body that allows them to pair so well with a variety of dishes, from charcuterie to curry.

Orange wines weren’t always orange, though. Winemakers in the country of Georgia know skin contact wines as amber wines, a style they’ve been producing for more than 8,000 years using the qvevri. These oversized, egg-shaped clay vessels hold more than 1,000 liters of wine and sit underground to stabilize temperatures during fermentation and aging. This method is the world’s oldest winemaking technique and is native to Georgia. Though, it’s not the only way to produce this style of wine. “Many winemakers around the world are making amber wines with different techniques but what they all have in common is skin contact and maceration,” shares George Margvelashvili, owner and vice president of Tbilvino Winery in Kvareli, Georgia.

The winemaking process drives the flavor and texture complexities of the wine, which in Georgian qvevri aligns with another emerging category in the wine world. “Qvevri winemaking is very closely related to the concept of natural wines that started gaining momentum,” explains Zurab Ramazashvili, owner and director of Telavi Wine Cellar.

“It may sound strange, but one of the oldest and archaic methods drives modern tasting preference,” adds Margvelashvili, who traces the trend back to the 90s when western winemakers started showing interest in ancient methods of Georgian winemaking and began exporting qvevris from Georgia to their wineries in Europe. To this day, there is up to a year’s waiting list for one of these traditional clay eggs.

“The main factor of interest was based on the actual archeological and physical evidence that proved Georgia’s priority of being the motherland of wine and the vine. Straight after that, the world became acquainted with living winemaking techniques, counting back eight millennia: that is the winemaking in qvevri,” Ramazashvili emphasizes.

More than 20 years later, amber wines now have a separate category on prominent wine lists. According to the National Wine Agency of Georgia’s 2021 report, Georgian Wine exports span 62 countries worldwide, generating $250 million in revenue, a 16% increase over 2020. Additionally, the U.S. market imported one million bottles, a first since Georgia’s independence from the Soviet Union in 1991.

But many consumers still don’t recognize the roots of this relatively “new” style of wine, particularly given its fast track to the top. Many overlook Georgia as a wine region, says Ramazashvili, something he blames on the comparably smaller production and less presence in western markets, particularly on supermarket shelves.

Margvelashvili also blames the lack of education. “I wish more people around the world could taste Georgian amber wines made from different grape varieties,” says Margvelsashvili, noting the three most distributed grape varieties as Rkatsiteli, Saperavi and Tsolikouri, all of which lend themselves to varying styles of amber wines. “It’s important to know that we have 8,000 years of uninterrupted history of winemaking, and even though we had some tough periods, today [the] Georgian wine industry stands on its top level of development, and this positive trend will continue,” says Margvelashvili.

Many use orange and amber terms interchangeably to describe the extended contact of the white wine with its white grape skins. The grape skins are not actually white but rather a pale green or blonde that, when left to soak with the liquid, will impart a golden hue.

“I think the proper definition of the style of such wines is amber and not orange,” shares Margvelashvili, talking about the color derived from any style of skin-contact wines. “For many, orange is confusing. Even while searching the net, orange can display completely different products or literature. It is clear that Amber wine is literally macerated white wine with skin contact.”

The color can range from amber to light gold to orange-tinged, copper and even pale straw that’s more reminiscent of white wine. Regardless of the shade, as long as the wine is made with grape skin contact, it “adds texture and tannin to white wine and provides another dimension than just pure fruit,” explains Jason Percival, the wine and beverage director at Harvest restaurant in Cambridge, Massachusetts. “These can make for dynamic food pairing options taking on an earthier appeal with richer foods, oilier fish like salmon, tuna, Mahi, mackerel, and grilled or heavily roasted components,” he adds.