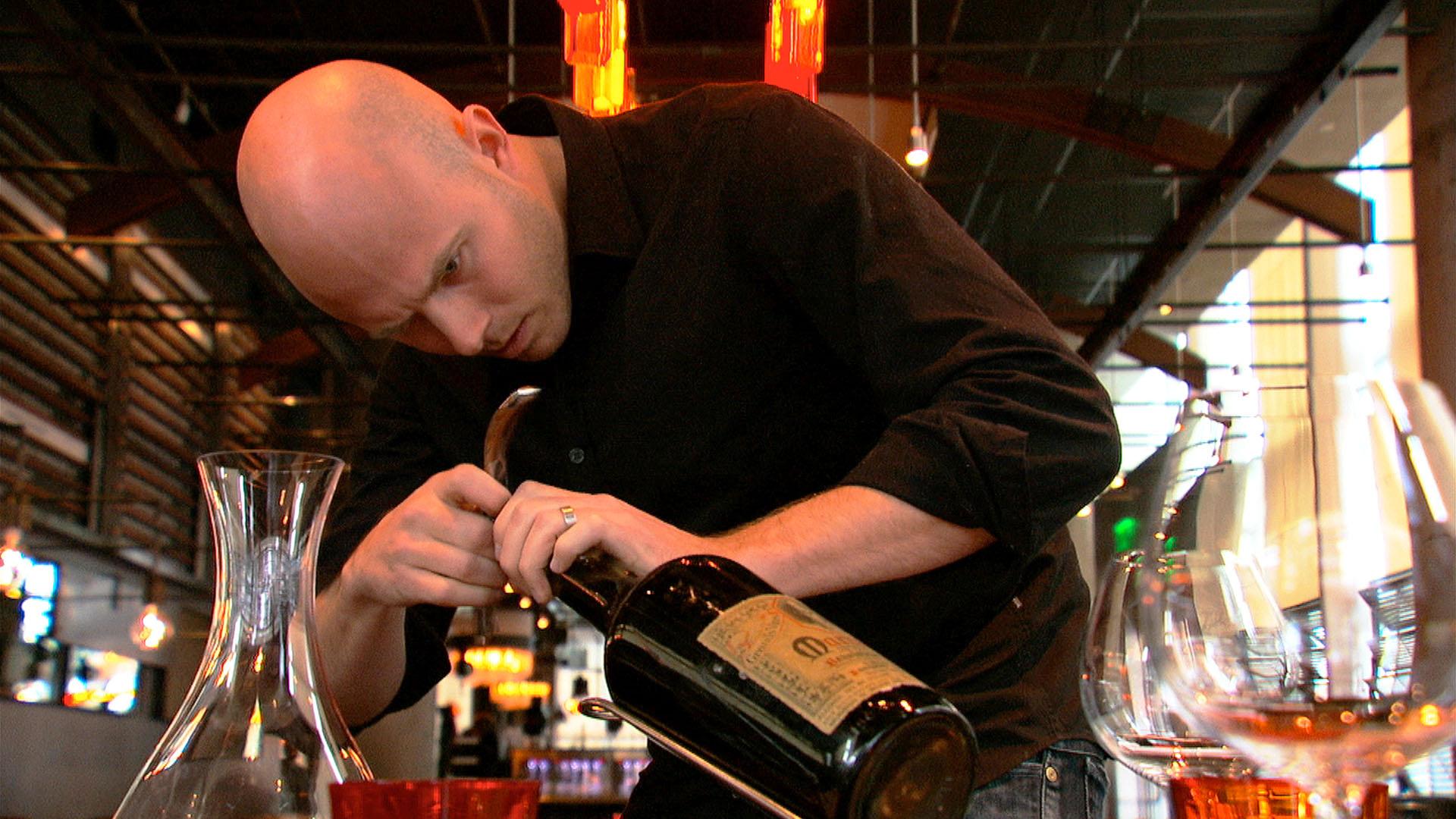 It’s been nearly ten years since the release of the original SOMM film. In those years, we’ve seen the four featured cast members flourish across many avenues of the wine industry. Throughout our Where Are They Now series, we discovered that Ian Cauble and Brian McClintic head up wine subscription services, while DLynn Proctor is the director of Fantesca Estate & Winery and a large force behind Wine Unify. But what about Dustin Wilson?

Master Sommelier Dustin Wilson lives on the east coast and arguably gets the most face-to-face interaction with wine consumers. His brick and mortar store, Verve Wine, is a mere two and a half blocks away from his newly opened Tribeca restaurant, One White Street. Between the two, in addition to a new endeavour helping grow small restaurant groups, he’s busy. Not to mention he’s made dozens of appearances on SOMM TV and is expected to be a part of this year’s highly anticipated SOMM 4: Cup of Salvation.

We connected with Wilson to discuss his current day-to-day, the challenges of opening a restaurant during a pandemic, and the drink he reaches for – if he’s drinking at all – at the end of a long day.

Let’s jump back in time a bit. How did you become involved with the original SOMM film?

So the first time it came up, I was living in Aspen working at The Little Nell hotel. Brian McClintic, who I knew because we had taken our Advanced exam together, was living in California but moved to Aspen and started working with me as a server. He and Jason (Wise) were buddies, and it came up that he was making a film about pursuing the Master Sommelier exam. He asked if we had interest in doing it. I said, “sure, why not?”

And that was it. I didn’t hear anything for a while, and we went to the MS exam later that year, which I think was in Napa at Meadowood. They had already started filming Ian (Cauble) there, another friend of ours. But I didn’t become a part of it until much later in the process. I left Aspen and moved to San Francisco to take another job. It was out there that I joined in the filming.

What do you remember about having cameras follow you in the lead up to the exam?

I remember a few instances. They were at our apartment in San Francisco quite a bit, filming us just hanging out drinking and tasting and carrying on. Or a few times that they pull us aside and sit on the couch or at my desk while studying and interview us for, you know, forty minutes or so. I remember talking to the camera a lot in those interviews. But they never really bothered me per se.

But there was one instance in the movie when we went to another friend’s house, thinking we were doing a typical blind tasting session with one of our mentors. We found out 5 minutes before the tasting that the cameras were in there, and they also invited all these other people to join and watch. That was the only time I remember the cameras affecting me. I think we were about two or three weeks before our exam; having these six other people watching the process, it was just too much for me. I fell apart. So you can see in the movie where I’m sitting in my sweatshirt just like having the worst tasting in my life on camera.

Have you ever imagined the trajectory of your career without the SOMM films? Do you think it would be any different?

I think most of my career path would be the same, because I had passed the MS exam and taken a job at Eleven Madison Park as the wine director by the time the movie came out. I was there at least six or eight months before the film was released. So through that, the movie didn’t really affect anything.

I think it did affect things after. So after a couple more years at EMP, I started my own business, Verve. The exposure from the film gave me a nice extra boost. The store opening carried a lot more buzz around it than if I had opened it having not been in the movie.

Subsequent opportunities came from that, like people who had seen the movie and wanted to book tasting at the shop. Being in the film certainly opened doors. I’ve met people that I probably wouldn’t have and had opportunities that I probably wouldn’t have. I give myself a lot of credit for the early half of my career, and then when the first film came out, that really helped catapult things for sure.

In terms of your current endeavours, tell me a bit about how you’re splitting your time these days. What’s your day-to-day like at both Verve and your new restaurant, One White Street?

Verve has a big enough team that my job is really only management of the business; I’m less involved in the day-to-day operations. My time there focuses more on overall strategy and less selling wine or, you know, being in the shop as much as I was in the very beginning. So that is what opened the door for me to do the restaurant, which is One White Street. We just opened our doors in August of 2021, and it takes a pretty good chunk of my time. Particularly in the beginning, I was there all day, every day. So it was about a hundred percent of my time for four months or so. And I’ve just recently started pulling away from that a little bit to focus on other things.

Right now, the primary project is a company called Apres Cru, which began in the summer of 2020. But it’s expanded extremely fast. And now I think it probably takes fifty to sixty seventy percent of my time, depending on the week.

What is Apres Cru, can you tell us more about it?

Absolutely, it’s a restaurant investment holding company. We find restaurant operators that we think create exciting experiences, have great brands, and are looking for growth. We figure out how to get them there. Most of our partners are small groups, like two or three restaurants, but looking to expand beyond that and needing assistance in one way, shape or form.

So we offer a combination of back-office and strategic support, from human resources and financial support to operations strategy and marketing. Many small restaurant organizations don’t have those things, and we help put infrastructure into their businesses and then help them grow. And then, with that, we also provide capital for them. So we become a primary capital source for growth and a bank of resources to help streamline their operations.

We started in the summer of 2020, and we signed up until now; we’ve signed four partners, with a fifth one about to be signed soon. I think we have about a dozen restaurants underneath us at the moment. And by the end of the year, it will probably be more like 20 and then opening between five and ten restaurants per year for the next couple of years. So, it’s been really fun, and it’s exciting, and we’re moving fast.

You’ve obviously been very busy through the pandemic. But can you speak to any challenges you faced during the opening of One White Street?

It was terrible, just like anyone else, terrible. In the beginning, it was crazy because things were starting to come back in New York. There was a demand for dining out but a real staffing shortage. So we launched, and we had a lot of good buzz around us but a ton of demand. So we were getting our asses kicked every single day. The entire management team were handling different positions in the restaurant. So I was hosting and running the reservation book and answering emails. Our general manager was behind the bar every single night. It was a madhouse. It’s gotten better since then, which is great, but it’s been a struggle.

I feel a bit lucky in the sense that we bypassed what everybody went through in the spring of 2020. I have immense respect for business owners that went through that struggle.

*Editor’s note: Due to a phone connection error, the remainder of the interview was completed via email.

Between all your businesses, how often are you blind tasting or calling wines?

I’m honestly not really blind tasting much these days. It happens on rare occasion, usually very casually with friends.

Have you ever thought about what you would be doing if you weren’t in wine?

Probably working in the mountains somewhere, likely in the skiing industry in some capacity.

To finish up, you’ve arrived home at the end of a long day and reach for a drink. But it can’t be wine. What is it?

I’m rarely drinking after work; in fact, I don’t drink much during the week at all. But when it happens, my go-to drink outside of wine is either a Modelo Especial beer or a well made Manhattan cocktail.