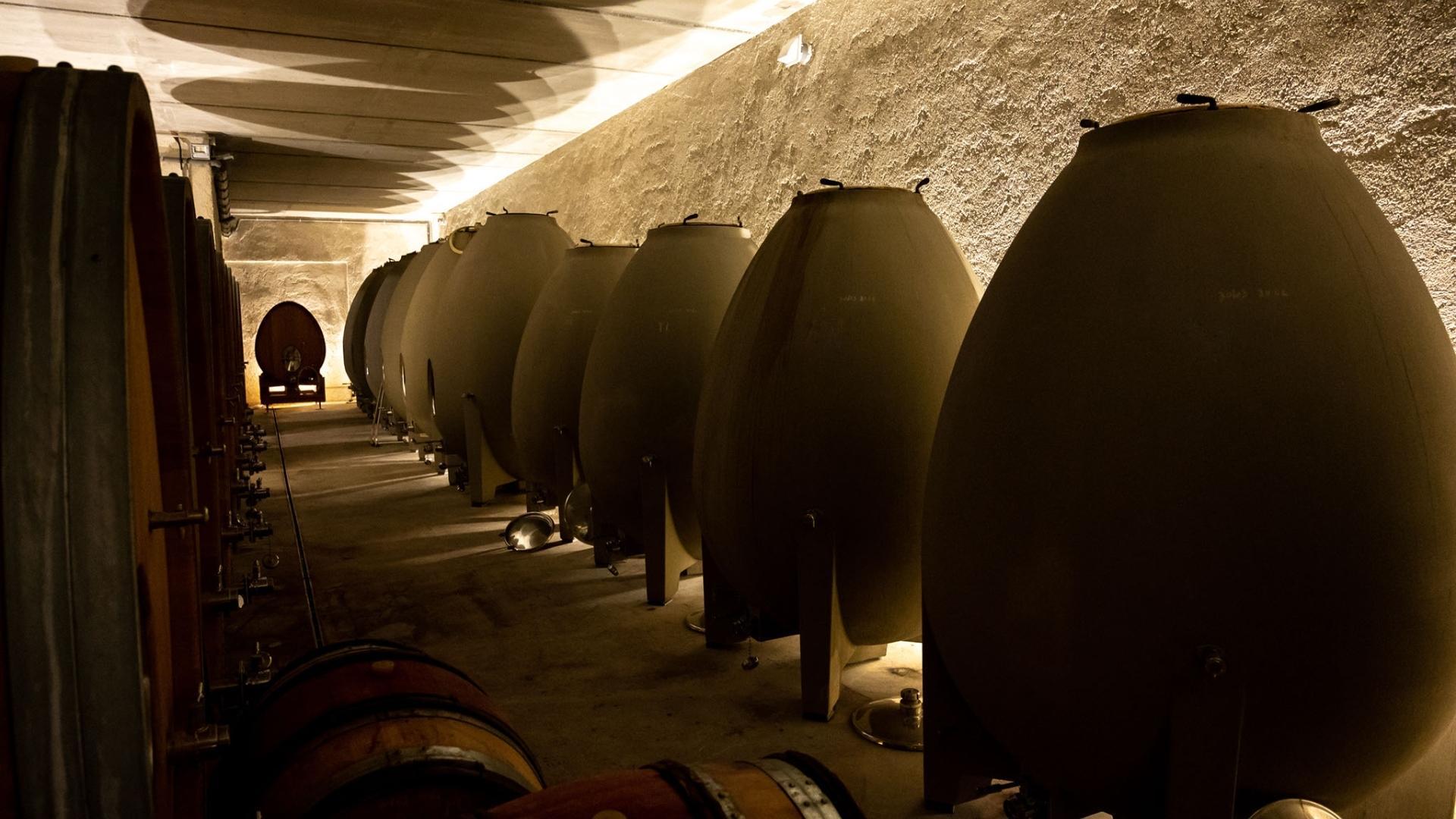 The oak barrel has become synonymous with well-made, premium wine in recent centuries. Two millennia ago, Romans began regularly using oak barrels to transport everything around their expanding empire, from weapons to wine. Eventually, savvy winemakers began connecting the softer, smoother, tastier wines with the vessel in which it was held. As a result, the cult of the barrel began. But climate change and cost are spurring a shift in the aging vessel landscape.

Concrete was also used to ferment, store, and transport wine thanks to the Romans. However, it was considered a less practical, more breakable tool. Eventually, the most respected winemakers with the biggest financial resources, began to rely on barrel-aging programs almost exclusively. Concrete eventually became less relevant and fashionable.

For millennia before the advent of the wooden and concrete vessel, wine was fermented, aged, and stored in amphorae, or clay.

Today, winemakers across the world are turning to both clay and cement for a variety of reasons. Not only have the regions — like Georgia, Portugal and Southern Italy — where clay and cement remained key aging tools risen in estimation, but producers are finding that they can counteract the hotter vintages climate change is bringing to the cellar.

Wood vs. Clay vs. Concrete

Depending on size (for all), toast (for oak), type of lining (for clay and concrete) and other details, these vessels can have very different effects on wine. But there are broad generalizations about each type of vessel that serve to illustrate their most elemental differences.

Typically, wood barrels are made from oak. New barrels often introduce distinct flavors like vanilla, chocolate, spice and cedar, a phenomenon that lessens as the barrels age. Barrels also introduce a small amount of oxygen into the aging space, accentuating tannins and creating a wine with more structure. Larger barrels have a less pronounced effect on the tannins and structure.

Amphora or clay containers are porous. This porosity introduces oxygen to the wine, but unlike oak and other wood barrels, these vessels do not introduce flavors. Amphora can be used to ferment and/or age wine and are credited with allowing a wine’s distinct flavors to emerge, with the structural benefits of micro-oxygenation.

Concrete, like clay, is neutral. It doesn’t add flavor, but many believe it softens the texture and subtly changes the structure of a wine. In addition, New World winemakers frequently use it these days to ferment and sometimes age wines. Both concrete and clay, winemakers say, transfer a little less oxygen to the wine.

“One of the many reasons we use clay and amphorae is the oxygen transfer they allow,” says Tony Offill, winemaker at William Chris Wine Company in Hye, Texas. “We lean towards a reductive winemaking style, so having vessels that provide less oxygen transfer than wood is great.”

Unlike oak, clay and concrete offer stable temperatures inside the containers —regardless of cellar fluctuations.

Concrete and clay have earned legions of new fans for the subtle improvements they bring to wine, especially when used in tandem with the classic barrel.

“Barrel aging can make the fruit profile seem darker and add density,” says Mayacamas’ winemaker Braiden Albrecht, who ferments his Napa Valley reds in concrete. “Concrete seems to highlight freshness. Used together with neutral foudre and oak barrels, a diverse mix of vessels will bring out the highest potential from each lot and result in a more complete wine in the end.”

Many hail concrete as a breath of fresh air.

“We use concrete tanks to assemble our Pinot Noir Cuvées,” says Damien Lapuyade, assistant winemaker at Evening Land Vineyards in Oregon’s Willamette Valley. “These help harmonize our wines, slowing their development, retaining freshness, while also contributing a sense of minerality to the final wine.”

Others, like John Grochau, founder and winemaker at Grochou Cellars, who makes about 15,000 cases of wine in Amity, Oregon, started using a little concrete. (It quickly turned from an experimental crush into a full-blown love affair).

“I began with one 7-hectoliter concrete egg six years ago,” Grochau confesses. He’s now up to three 7-hectoliter eggs, one 1,700-liter egg and two 5,000 liter tank. “Concrete brings out the freshness in hot vintages. Wood is an amplifier and pusher of fruit. When I started making wine here 21 years ago, we needed wood to push wine forward. But now we’re so warm we need temperance. We need to preserve freshness and subtlety while adding textural components. We don’t need to be adding coconut, cocoa, vanilla, and cream that wood can bring.”

Clay, meanwhile, adds complexity without the broodiness that comes with wood.

“When we began using amphora in 2018, we found that it introduced polish with complexity, without the obvious oak component,” says Maya Dalla Valle, winemaker at Dalla Valle in Oakville. “Wood can be rougher, and clay brings out fresher fruit flavors and stays truer to the aromatic profile, an increasingly important consideration for us because our vineyards ripen early.”

“We started using amphorae in 2018 with our estate Tannat,” Offill says. “It’s such a big, tannic, bold wine. We want to make it enjoyable without having to age it for three years in barrel. And on a physiologically underripe year — which happens during intensely hot summers.”

Amphora and Concrete are Cost-Effective and Eco-Friendly Long Term

A typical oak tree used to make wine barrels is at the youngest 60 years old and the oldest around 200. One tree yields, at most, three barrels, usually two. Many wineries use a barrel once, but in general, all need replacing after 4-5 years.

But concrete and amphora can be used for generations — or until they crack.

“Our 1.5-barrel amphora cost about $4,000 with accessories and transportation factored in,” says Dalla Valle. “A barrel costs about $1,000 but needs frequent replacing. In the end, amphora is a better investment and more eco-friendly. We will add more to our program in the future.”

Offill agrees that while the upfront cost of concrete and amphorae is more. However, the longevity of both more than justifies that initial outlay.

According to the National Centres for Environmental Information, the world seems to get hotter every year. This year alone, temperatures have been about 1.53 degrees above the 20th-century average. Expect the trend to continue, even as wine lovers gravitate toward the fresher flavors made ever-more elusive for winemakers struggling with increasingly hot growing seasons.

It may not be possible for winemakers to create fresh, bright flavors from whole cloth, but amphora and clay can help preserve the elusive purity of freshly pressed grapes in a hot, fast world.