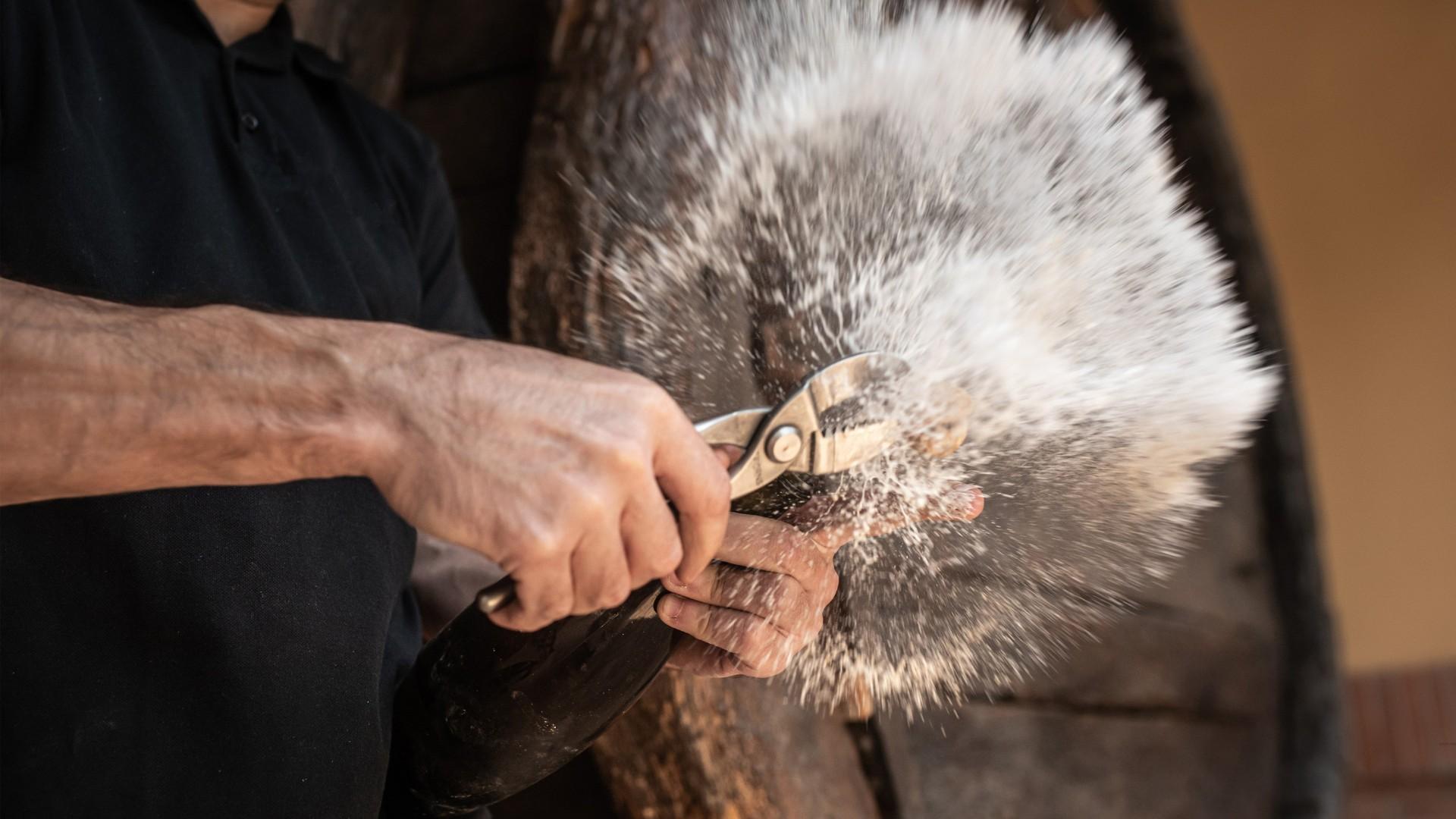 Dismissed by many as a cheap and cheerful, but inherently basic bubbly, the stereotypes that have Cava trapped in the brunch zone are beginning to dissipate. Because while entry-level Cava can be just simple fun fizz, there is an increasingly delicious array of rigorously produced, long-aged, complex and elegant cuvees, thanks in part to new regulations around the production of Cavas classifications like Reserva, Gran Reservas or Paraje Calificado.

The sparkling wine was first introduced in Spain in 1872 when Josep Raventós produced it in the northeastern region of Catalonia. Like Champagne, Cava’s effervescence develops through a second fermentation in the bottle, where it ages on the lees, often for years. But while Cava originated in Catalonia, it did not stay there.

A Denominación de Origin (D.O.) implies a sense of place. But Cava, rule-breaker extraordinaire, belies that definition, and is the only Spanish D.O. that extends beyond one area.

Hemmed between the Montserrat Mountains and the Mediterranean Sea, the climate of Comtats de Barcelona is Mediterranean, with microclimates transformed by a vineyard’s distance from the coast and the Montserrat mountain range, its elevation, exposure, and blend of soils.

The D.O. may have a laid-back approach to place, but in recent years, it has become increasingly rigorous in controlling how grapes grow, age, and are labeled.

There are nine allowable grapes in Cava production. The traditional whites used since Raventós’ time — Macabeo, Xarel-lo and Parellada — dominate the plantings.

Last year, to clarify what wine lovers would find in the bottle, the D.O. announced new classification rules. The most entry-level version of Cava (Cava de Guarda) must age for a minimum of nine months.

The next levels: Reserva, Gran Reserva, and Paraje Calificado, will require 100% organically grown grapes by 2025. Plus, the vintage needs to be on the label. That means buyers will know precisely when their wines were harvested and how long they were aged for.

Reserva sees a minimum of 18 months, Gran Reserva a minimum of 30 months and Paraje Calificado a minimum of 36 months. The D.O. also obligates producers to share the subzone on the label, allowing consumers to know where the grapes were grown.

While these broad institutional changes appear to be already making an impact — sales of Cava were up 40% year-over-year in the U.S. in 2021. However, the changes happening on the ground are arguably even more exciting.

Alta Alella is on the edge, literally and metaphorically. Alella is a little-known district in Catalonia, right on the Mediterranean coast. Visitors to Alta Alella, set in the middle of Serralada de Marina Natural Park, will be graced with sea views. The winery was founded by Josep Maria and Cristina Pujol-Busquets in 1991. The pair raised their daughters Mireia and Georgina in their organic vineyards and what Mireia Pujol-Busquets calls their “radical” cellar.

“We began making natural wines, Cavas and Pet Nats, some without S02 very early on,” explains Mireia, who now makes the family’s wine with her father, Josep Maria. “Our wine is raw.”

But it is also extraordinarily refined. Alta Alella is one of just six wineries in the world to receive the highest classification in Cava: Paraje Calificado. Cavas with this quality marker require vines to be least ten years old, hand-harvested, with a maximum yield of 7,350 pounds per acre. Production and bottling must happen on-site, and there must be complete traceability from vineyard to market.

In addition to pushing winemaking boundaries, the team at Alta Alella is experimenting with new ways to mitigate climate change.

“We are working to develop disease-resistant varieties of grapes that can also adapt to climate change,” Mireia says. “As winemakers and growers, we keep planting the same grapes, over and over. We are not allowing them to adapt to the changing environment. We need to if we want to continue to make wine.”

Eleven years ago, Mireia began working on a project that crosses traditional grape varieties that grow in the region to see if they could withstand high temperatures and high humidity in greenhouses. She then plants the most successful crosses in the field. Now, they are just beginning to work with the micro-vinifications of these plants.

“We want to make sure we don’t lose the organoleptic characteristics of the mother plants. But at the same time, can thrive without copper and sulfur in the vineyard,” she says. “We must allow and encourage our grapes to adapt if we want them to be naturally healthy and resilient.”

Vilarnau’s roots date back to the 12th century, so the winery’s fondness for teasing out and exploring every intricate strand of the region’s terroir is understandable. Vilarnau’s first Cava emerged in 1949. But its current iteration didn’t truly begin until 1982, when the winery became part of the Gonzalez Byass family of wineries.

Built in 2005, the avant-garde winery is strikingly modern, straight-lined, light-filled design meld with the Mediterranean surroundings. Every effort was made to create a sustainable environment. Using local materials in its construction, a sophisticated rain collection system lives on the building’s exterior. Renewable energy — including solar power, which provides almost half of the winery’s energy — is also a focus.

“We are inspired by our land here and by Barcelona. We see it as one of the most innovative cities in the world,” Plazas Torné explains. “Everything we do, from our tours of the vineyard for visitors on bikes to our labels, inspired by Gaudi mosaics, is meant to honor and reflect the land.”

The 50-acre vineyard offers majestic views of the Montserrat mountains, which shield their Macabeo, Xarel-lo, Chardonnay and Pinot Noir plantings from the wild Pyrenean winds.

The team takes their devotion to the region a step further by creating a Cava (Albert de Vilarnau) from organically produced Xarel-lo grapes aged in chestnut wood barrels from trees that grow in the nearby Motseny forests. The barrels are handmade by a local cooper.

“We believe using a local wood honors the terroir,” Plazas Torné says. “We also find that the chestnut preserves Xarel-lo’s characteristics. It delivers complex, tropical notes, with a creamy mouthful and an aftertaste that reminds us of candied chestnuts.”

Pares Balta was born in 1790 but stays young and fresh by constantly pushing new ideas and concepts in the vineyard and cellar.

Brothers Joan and Josep Cusiné manage the vines, while their wives, Ma Elena Jiménez and Marta Casas, make the wines. Pares Balta has almost 500 acres across five different estates at altitudes from 550 to 2,500 feet above sea level. They farm organically and biodynamically, with a flock of sheep as weeders and soil aerators.

“We are passionate about this place. We do everything we can to make the best wine for today and tomorrow,” Joan says. “For us, that meant converting to biodynamic farming and looking at the vineyard and the winery holistically. We want the plants, animals and humans to balance and work together.”

Marta has delved deep into the process, utilizing local plants like dried horsetail in teas that they spray on the vineyard to combat pests naturally.

“We are also working with indigenous grapes like Sumoll, Carinena Blanca and Garnacha,” Joan says. “They ripen and are ready to be harvested at different times. This helps balance out the risks of frost damage, hail and other weather extremes.”

And like Vilarnau, Pares Balta is experimenting with aging vessels from local materials.

“We dug clay from our vineyard and had our neighbor turn it into an amphora,” Joan says. “Looking around carefully at the land and what is already there is often enough to inspire new ideas and experiments.”

Cava, clearly, is much more than a fun, fizzy thing to guzzle with eggs and toast. Cava can also represent the highest expression of place, time and craft. A vessel for terroir and tradition, but also creativity and human ingenuity.