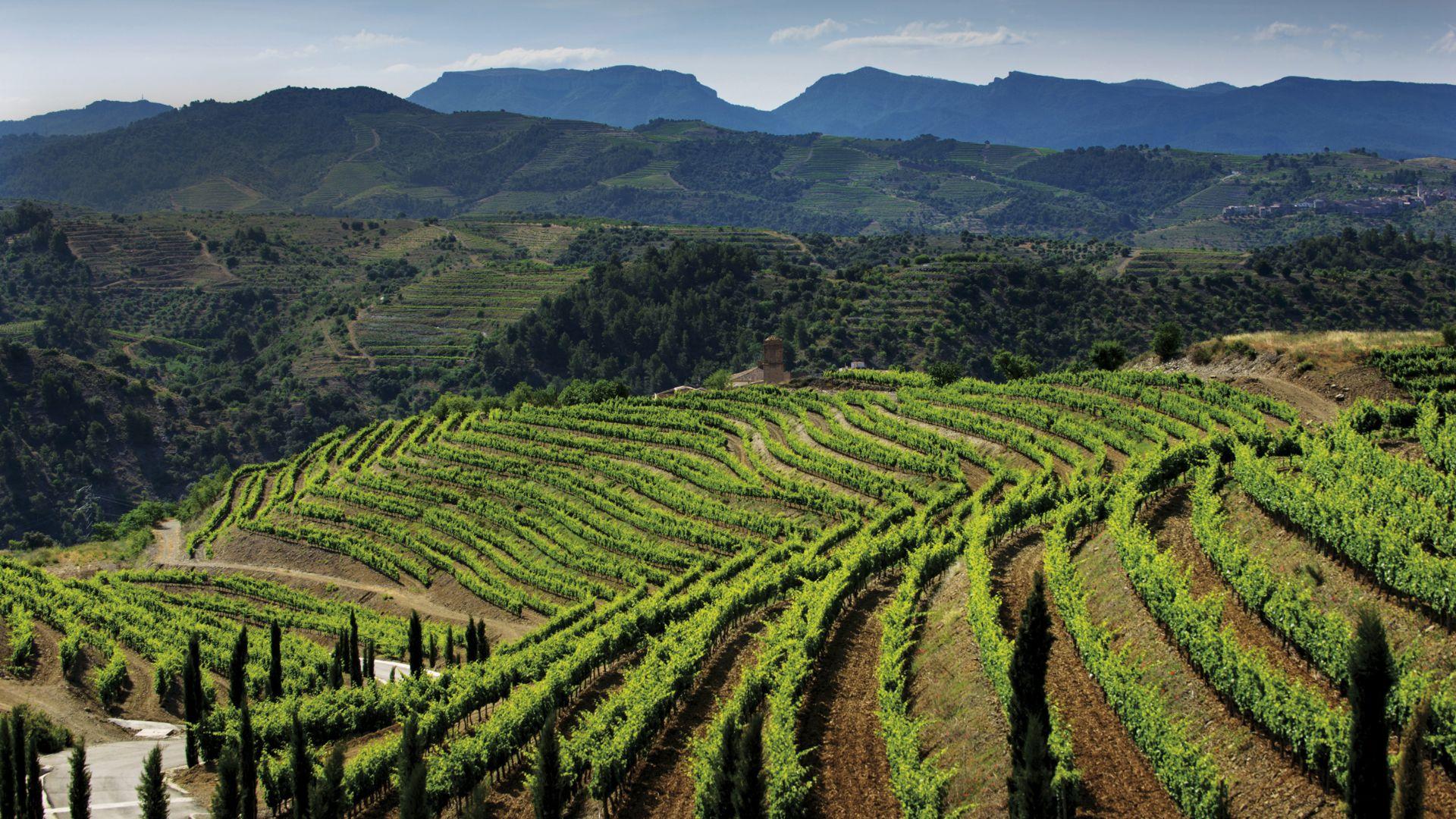 The landscape of Spain’s Priorat wine region is dramatic. It’s a tiny area, a mere dot on a map in the province of Catalunya and hidden from view amongst the craggy cliffs of the Serra de Montsant mountain range. It’s a beautiful, if heartstopping, place to drive through and an even more perilous place to grow vines — hills can reach gradients of up to 60%.

It takes dedication to farm here. Machine harvesting is virtually impossible, and a walk through a vineyard is more of a climb. “The development of ‘costers’ or terraces make harvest difficult, and the majority of pruning and harvesting must be performed by hand,” says Ryan Hess, the bar director and sommelier of Mother Tongue in Los Angeles.

If you dare to make wine in Priorat, the land will reward you with robust, deeply mineral wines seldom seen in Spain’s hot climate. Thanks to the unique llicorella soil and dizzying altitudes, red wines have beautiful energy and minerality that continue to shine after years of aging.

And then there are the unquantifiables of the region. “Priorat is special not only because of its charismatically rich and deep flavored wines but it’s intangible, and dare I say, seemingly divine beauty,” says Hess. “Legend says the Carthusian monks who settled here chose the place because they saw it as the foot of the ladder to God.” Many monasteries still dot the region, flanked by picturesque switchback terraces and rocky outposts. “With so much history, palpable culture, and wonderfully talented winemakers, what’s not to love?”

The Priorat wine region is 90 miles (144 km) southwest of Barcelona in the province of Catalunya, nestled almost entirely inside another wine region — Montsant D.O.

Winemaking here dates back to the twelfth century when Carthusian monks set up their priory (Cartoixa d’Escaladei) in the middle of what now would make up Priorat. As the years passed, winemaking expanded beyond the monastery and villagers began planting vines and making their own wines, drawn in by the region’s potential.

“Priorat’s iconic Mediterranean landscape, terraced hillsides, and bush vines are all part of the mystic beauty, but the region adds so much more than that!” says Hess.

“The region is protected from weather by the Serra de Monstant, which also benefits via steep slopes leading up the mountains,” says Richard Hanauer, wine director and partner of RPM Restaurants. “To the east is the Mediterranean which provides consistency to the climate by cooling the days and warming the nights.” Add in dramatic diurnal shifts and the varying altitudes and exposures, and there’s much to work with in Priorat.

Weather and temperature will vary from village to village — regions like Bellmunt del Priorat dip low into the valley, sitting at just 330 feet above sea level. Its neighboring zone, Solanes del Molar, has areas that soar almost 2,400 feet above sea level. Even the most stratospheric of elevations have vineyards — Cellar Pasanau has sky-high plantings, and Familia Torres is increasingly looking up and purchasing new plots at higher elevations to future-proof the winery from rising temperatures.

“The vines produce very extracted and concentrated grapes from basking in the Mediterranean sun,” he notes. “Combine their soils with their climate, and the results are dense yet complex wines; truly unique and of a naturally high quality.” These characteristics earned the Priorat wine region one of two DOCa (Qualified Denomination of Origin) statuses in Spain, bestowed by the country’s regulatory board only to regions with the highest consistency and quality.

Another factor that gives Priorat its swagger? The llicorella (‘licorice’, referencing the dark color) soil. The deep red-black soil made with blends of brown slate and quartzite is “a key part of the Priorat terroir,” says Hess, “and plays a huge role in the production of wines. With little organic matter in the soil, the dark red rocky land forces the vines to look for water benches and nutrient levels deeper than most.” It’s fine-grained and largely rocky — walking around a vineyard, you can pick up hand-sized pieces of pitch-black metamorphic rock that feeds ionic minerals into the vines. “That mix of brown slate and quartzite that simultaneously enables deep roots while reflecting extra sunshine in the vineyards,” Hanauer continues.

Land of Garnacha and Cariñena

Red wines dominate the region, accounting for over 90% of Priorat’s plantings. Garnacha (Grenache) and Cariñena reign, though there are smaller parcels dedicated to Syrah, Cabernet Sauvignon, and Merlot. Increasingly, indigenous varieties like Moneu, Garro, and Querol are popping up more and more. (Familia Torres’ Miguel Torres Maczassek has done incredible work in recent years to restore and promote the use of indigenous varieties across the Priorat and Penedès regions.)

“One should be expecting to drink a great red if enjoying a Priorat,” says Hanauer. “Very full-bodied and smooth. Dark in color with that unique mineral touch of the llicorella soils.” He finds that Priorat wines have more fruit presence and fewer oak tendencies than Rioja and Ribera. “The freshness of the wine is counterintuitive to Spanish bottlings, yet they all have distinctive Mediterranean charm.”

Hess notes that reds from the region are rich, spicy, and layered with plum and dark cherries. “Expect subtle spices like cumin and cardamom, fallow with pithy red fruit,” he notes. Older vintages will only deepen those characteristics — these are wines worth sitting on.

White wines are uncommon in Priorat — they account for less than 8% of the region. “I generally think that some of the most wonderful white wines from this region get ignored far too often because of the overwhelming popularity of the reds,” Hess says. He finds grapes like Garnacha Blanca, Macabeo, Pedro Ximénez, and Chenin Blanc are just starting to find their place in the high hills. “Garnacha Blanca, a varietal with typically not a lot of complexity behind it, in Priorat, has finesse and a depth of aromatic nuance. Often, it has a waxy mouth texture due to high levels of mica in the soil. It can be quite fetching.”

Keep an eye on the region as the white wines find their consistency and voice. “You can definitely look forward to more Mediterranean style whites — larger in body, with more palate and less aroma,” says Hanauer. “The climate is ideal for ripening fuller-bodied grapes that can be extraordinarily complex and can’t compete with the highly aromatic and acid-forward whites that are so popular right now. Some examples of Priorat Blanca can also be extraordinarily complex.”

Until then, there’s plenty to explore within the region. Hanauer cites the wines of Vall Llach in the village of Porrera — “their ‘Embruix’ is a great value for an introduction to the region.”

Hess is keen on Rene Barbier of the “iconic” Clos Mogador. However, “I also love Alvaro Palacios (Clos Dofi and Clos l’Ermita), who was one of my mentors and whom I still look to as one of the greatest winemakers I’ve ever known. But you can’t forget the others that have put Priorat on the radar: Daphne Glorian with Clos Erasmus, José Luis Pérez with Clos Martinet and Carles Pastrana of Clos de l’Obac.”