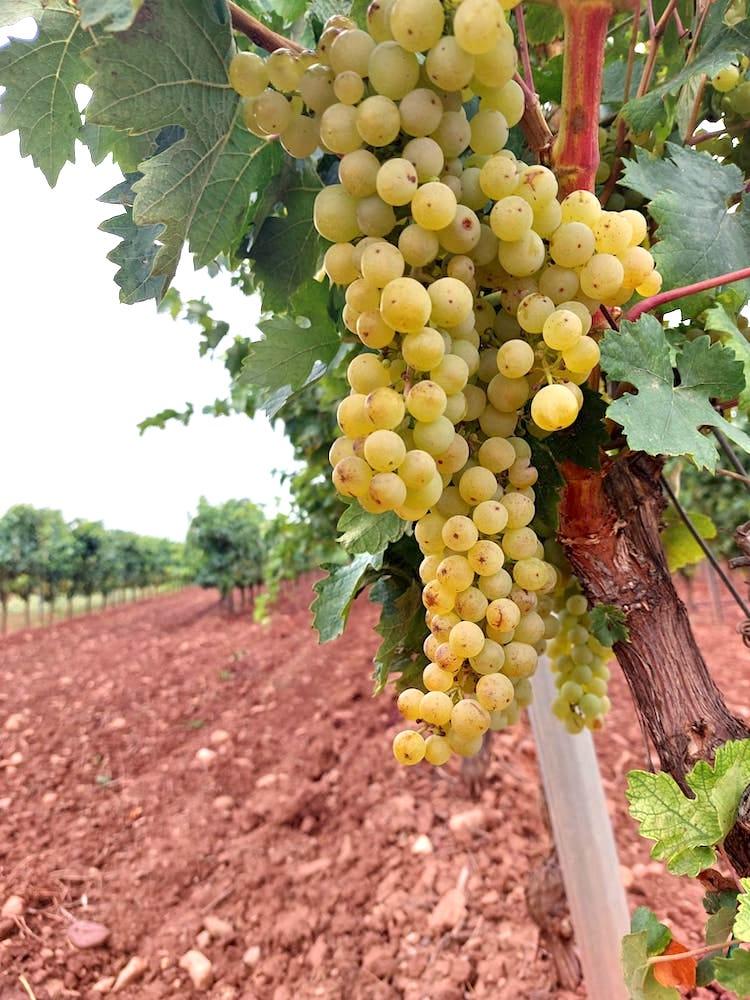 Unless you’re a Rioja-loving wine nerd, chances are that Tempranillo Blanco has never crossed your path. The versatile white Spanish grape variety was only discovered in Rioja in 1988, where it’s believed to be the only region on earth to grow it. Its individuality radiates further because, in true millennial fashion, it requires a bit of TLC to flower, ripen, and develop to its fullest potential.

The Discovery of Tempranillo Blanco

Tempranillo Blanco was found in 1988 near Murillo del Rio Leza in La Rioja. The vineyard it was found in grew classic Tempranillo, the red-skinned grape many wine lovers are deeply familiar with. The grower noticed that one particular cluster, instead of turning Tempranillo’s trademark midnight blue, was golden-green following veraison, the onset of the ripening of grapes, when the berries change colors. Intrigued, the grower reported the new grape to Spain’s Center for Agricultural Research and Development.

Scientists took samples, propagated and cloned them for further study. By the mid-90s, Tempranillo Blanco was declared a promising and exciting new variety. Growers in Rioja began experimental grape plantings and found its concentration of flavors and versatility so pleasing. Advocation started for its acceptance by the Rioja Consejo Regulador (Rioja Regulatory Council), and in 2007, the request was granted.

Unlike many grapes where the parentage is obvious, Tempranillo Blanco appears to be the result of a natural, spontaneous mutation. One that came about during the growth of a secondary shoot on a Tempranillo vine.

About 98% of its genes do hail from red Tempranillo, and it is 100% Vitis vinifera.

The discovery of a new grape—never mind one to rise so quickly to DOC status— seems incredible. But it’s not as implausible as it seems, says Mercedes García Rupérez, winemaker at Bodegas Montecillo in La Rioja, which has become one of the grape’s highest-profile proponents. Similar cases of mutated Vitis vinifera include Pinot Blanc (an offshoot of Pinot Noir) and Grenache Blanc (from Grenache).

“Nature is capricious, and it evolves and adapts,” says Rupérez. “Rioja’s main crop is the grapevine. Think about the millions of living creatures fighting to adapt and survive in an environment ideal for their cultivation, but also changing, and even, in some situations, hostile.”

But Rupérez also admits that the revelation would never have come without the grower’s deep well of knowledge.

“It was a needle in the haystack. Locating it was the result of all the work and knowledge that goes into every bunch of grapes over generations,” Rupérez says. “If he hadn’t known each of his vines as well as he did, he might have thought that one of his ancestors had grafted it using a white variety.”

A momentary oversight could have seen the removal of the nascent Tempranillo Blanco spur during subsequent pruning.

Tempranillo Blanco is versatile, and while its berries are smaller and more closely clustered than Tempranillo’s, their life cycles run in parallel. They also thrive in similar conditions, including sandy, chalky, clay, and limestone soils.

Both can grow in cooler and warmer regions of Rioja. As of now, Tempranillo Blanco only grows in Rioja. But, curious growers across Spain, in Alentejo, the Dao and Douro in Portugal, and pockets of Texas and California where the red Tempranillo is thriving could conceivably give the Blanco a whirl.

While Rupérez appreciates Tempranillo Blanco’s flexibility, she says for it to thrive, it requires care.

“We look after its foliage, ensuring that it’s comfortable during flowering and doesn’t get excessively dry during the summer,” Rupérez says. “When it is time for ripening, it is essential to take care of the acidity and control the sugar accumulation. We always harvest it at the right moment, as it tends to move quickly from having a considerable to an excessive sugar level.”

Tempranillo Blanco can be valuable in blends, but it shines in single varietal bottlings.

The grape is late to arrive at bud break and veraison but ripens early. When cultivated carefully, the grape is high levels of total acidity and malic acid at harvest.

In the glass, the wine is fruit-forward, with distinct yellow-green fruit flavors, including bananas, citrus and tropical fruits. There are also delicate floral characteristics. It has balance and persistence, with a medium to long structure. These wines are ready to drink upon release, but their high acidity also makes them ageable.

Tempranillo Blanco pairs well with anything that once lived in the water, from simply prepared shellfish to grilled squid or fattier fish like salmon. It’s also lovely with spicier dishes like Thai curry.

According to a 2020 regional report, Tempranillo Blanco has the second-highest amount of white grape plantings in DOC Rioja, making this 34-year-old phenom one of the most exciting successes in recent wine history.

Tempranillo Blanco has made life more delicious, certainly, but it’s also a reminder. Life is fast, unexpected and sometimes very weird. Keep your eyes peeled. You never know when or where a treasure may appear.

Sauvignon Blanc: Get To Know This Popular White Grape Variety