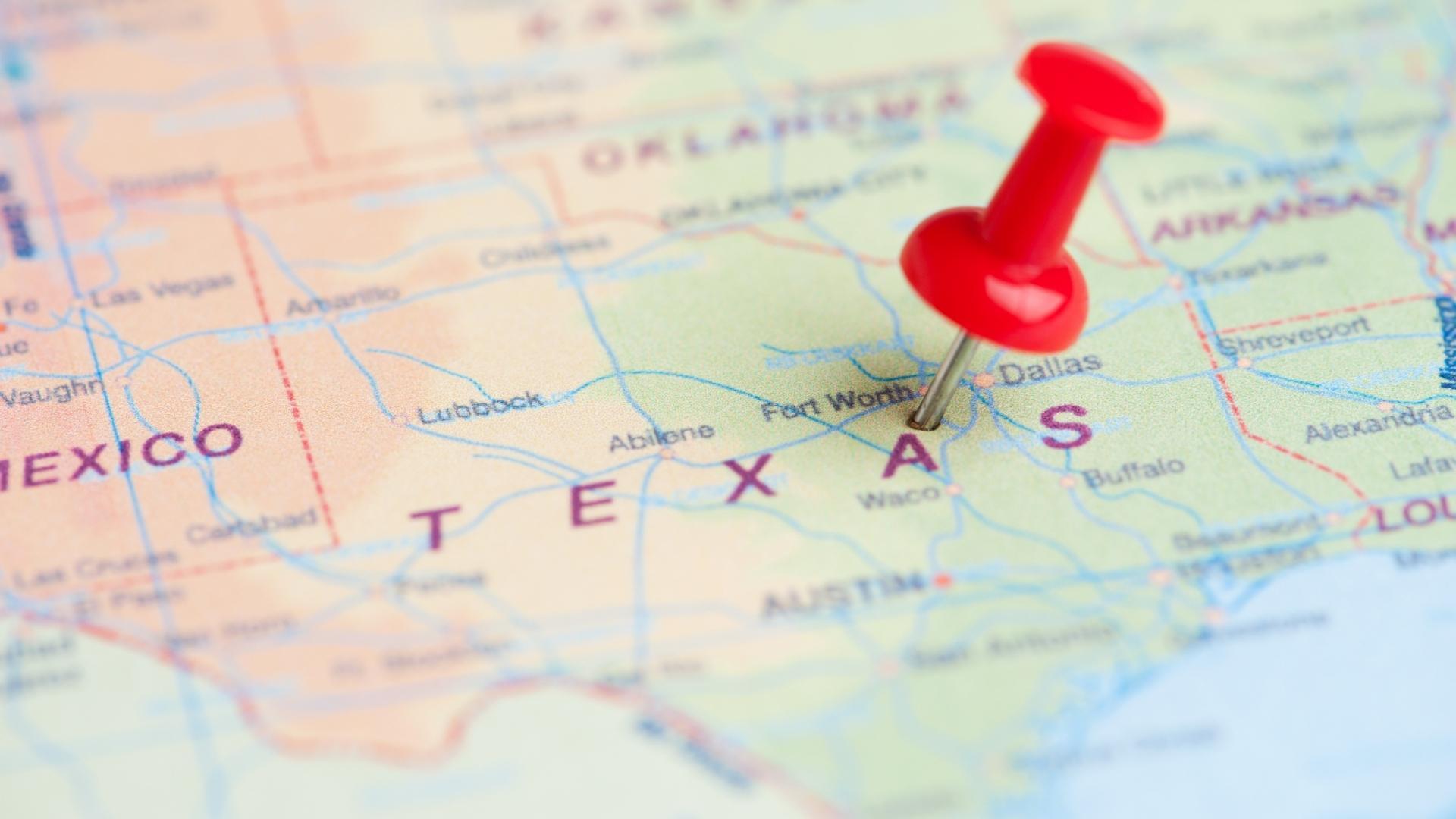 Vineyards that make Texas wine, similar to those living in the Lone Star State, are not faint of heart. “Temperature varies significantly, so the vines must be as strong-willed as a Texan to set its roots down,” explains Susan Auler, owner of Fall Creek Vineyards.

Texas’s eight grape growing areas see continuous air movements from the Gulf and Canada. With risk from multiple directions, farmers are on high alert through every stage of the growing cycle if they want their vines to survive.

Texas received its first AVA, the Mesilla Valley, in 1985. However, most of its acreage is across the state line in New Mexico. The following year, Bell Mountain became the first AVA to be fully within state borders. Today, both AVAs grow less than 100 acres of grapes each. Most of the state’s 5,000 vineyard acres grow in Texas Hill Country and Texas High Plains.

A 2020 US Dept of Agriculture grape varieties survey states over forty varieties grow in Texas, with Cabernet Sauvignon leading in red grape plantings. During the 90s, Tempranillo began to increase in plantings thanks to its ability to tolerate hot temperatures. Auler of Fall Creek Winery believes vineyards are like “learning laboratories.” To grow the best fruit possible, producers use their experience to determine which varieties grow the best for each site.

Tempranillo is now the state’s second most planted red grape. Merlot, Mourvèdre, and Sangiovese round out the top five. White grape varieties account for 29% of plantings and are led by Blanc du Bois. However, Viognier is proving to be a climatic fit due to its adaptability in unpredictable conditions and high tolerance to heat.

The Texas Hill Country AVA is enormous, spanning 9 million acres with elevations between 800 and 2,800 feet. It is located in south-central Texas and forms the southeast portion of the Edwards Plateau. The erosion of the plateau millions of years ago is responsible for depositing calcareous, granitic and sandy loam soils.

Lakes and rivers cover the region, including three major tributaries; the Colorado, Llano and Pedernales. The AVA’s temperature varies significantly. A mere 18 to 20 inches of annual rainfall, the vines seek moisture by digging deep roots to survive. “It’s all about matching the right grape to the right terroir,” says Ed Auler of Fall Creek Vineyards.

At just 5 square miles, Bell Mountain is a small region that sits entirely within the Texas Hill Country AVA. The region sits on the Llano Uplift, the highest elevation between the cities of Fredericksburg and Llano.

Julie Kuhlken, whose family has been producing wine in the Bell Mountain AVA since the early 1990s with Pedernales Cellars, says the assortment of degraded limestone, sandstone, and caliche soils is a patchwork of geology. “It is like a peacock’s tail of tiny facets of geologically distinct parcels. It is due to the Llano uplift, which pushed ancient stone to the surface millions of years ago, drawing from many different layers,” describes Kuhlken.

In contrast to the peaks of Bell Mountain, the Texas High Plains is a single elevation. “You only need to stand on a bucket to see the view,“ says Kuhlken. The region sits between 3,000 and 4,000 feet and experiences wide diurnal shifts. In summer, there can be a 30° temperature difference between day and night.

The Texas High Plain soil is rust red from its iron composition and consists of sandy loam over caliche and eolian sand.

Strong winds and arid temperatures mean less disease pressure. However, late spring frosts are not uncommon. In addition, regional producers face many other challenges, including water and labor shortages and an ongoing herbicide drift lawsuit.

Home to exceptionally hot daytime temperatures, and cold evenings, the Escondido Valley AVA is a desert with buttes throughout. It encompasses 32,000 acres in the state’s western portion, known as the Trans-Pecos region.

The valley sits at about 2,700 feet and was formed millions of years ago when the Stockton Plateau sitting on an ancient seabed arose, leaving calcareous and sandy loam soils.

Rainfall is minimal, averaging 10-12 inches annually. When it does rain, it comes fast and furious. The soils, which are underlined with gravel, drain quickly; but as the torrential downpours occur, the vines rely on their deep and wide roots to hold strong.

Harvest occurs earlier here than other Texan AVAs due to the heat. “You must be ready to go. There is only a 24 to 36-hour window when it comes to harvesting the fruit at the proper time,” says Auler.

Inside this small AVA, there are only four vineyards with a total planting of 43.5 acres, and at this time, only one winery; Château Wright.

The AVA is rugged and mountainous. “There are tons of mountains around. There is no other place in Texas like Fort Davis,” says James Smith, Chateau Wright’s director of sales and marketing.

These resilient vines endure the monsoon season in July and August, when most of the 8 to 12 inches of annual rainfall occurs. To make it through the 12 to 24 inches of rocky volcanic soil and reach the red clay below, the roots have adapted to grow deeper rather than wide. Amazingly, a positive of this harsh environment and being in the middle of nowhere, there is a lack of pests, so the vines remain ungrafted.

The Mesilla Valley AVA, split between New Mexico and Texas, runs along the Rio Grande River and was established in 1985. It sits at approximately 3,500 feet above sea level and is surrounded by the Organ Mountains to the west and the Rio Grande. Created when the Rio Grande flooded, the soil within the AVA is alluvial-consisting of sand, clay and loam with sedimentary deposits.

The AVA is extremely hot and dry, with less than 10 inches of yearly rainfall. Ryan Poulos, the owner of Zin Valle Vineyards, the only winery in the Mesilla Valley AVA, has an on-site well for drip irrigation. Additionally, to circumvent the natural hard clay on his 3+ acre fields, he had to dig 6 feet to the loam layer and import more than 100 tons of sandy soil, especially mixed for optimum grape production. To operate within the desert terroir, he focuses on drought-tolerant varieties such as Malvasia Bianca, Gewurztraminer and Zinfandel.

The Texoma AVA – about 3,600 square miles – although large in area, is home to only 65 acres of vines. Within the small area, there are vast differences between microclimates, soil, and topography – even between neighboring vineyards.

Patrick Whitemore, the owner of Blue Ostrich Winery & Vineyard, explains that his vineyards are planted on red clay soils, while his neighbor, just three miles away, is sandy loam with very little clay. Additionally, the elevations are drastically different. “As I sit on the patio at our winery, I am staring at hills and bluffs as far as the eye can see. We are truly in a valley. It’s much different than the other [east] side, where everything is completely flat,” he says.

According to Whitemore, many producers on the western fringes of the AVA would like to separate from the Texoma AVA as a whole because the contrasts are so extreme.

Comprising approximately 110 square miles, the Fredricksburg AVA became official in 1988. It sits entirely within the larger Hill Country AVA and is home to over 100 wineries among sprawling green landscapes and sloping hills.

Fine, sandy loam soils with calcareous and clay components comprise most of the region. “The flint dropped by the German settlers is now a characteristic of the soil,” explains Kelsey Kramer of William Chris Winery.

Climatically, Fredericksburg sees a gamut of weather, including intense sun, frost, hail and late-season rainstorms. These risky conditions lead to concern for mold and rot, and as a result, grape varieties with thicker skins grow here, including many hybrid grapes.

A Taste of Lake Chelan Wine: 4 Exemplary Wineries To Try