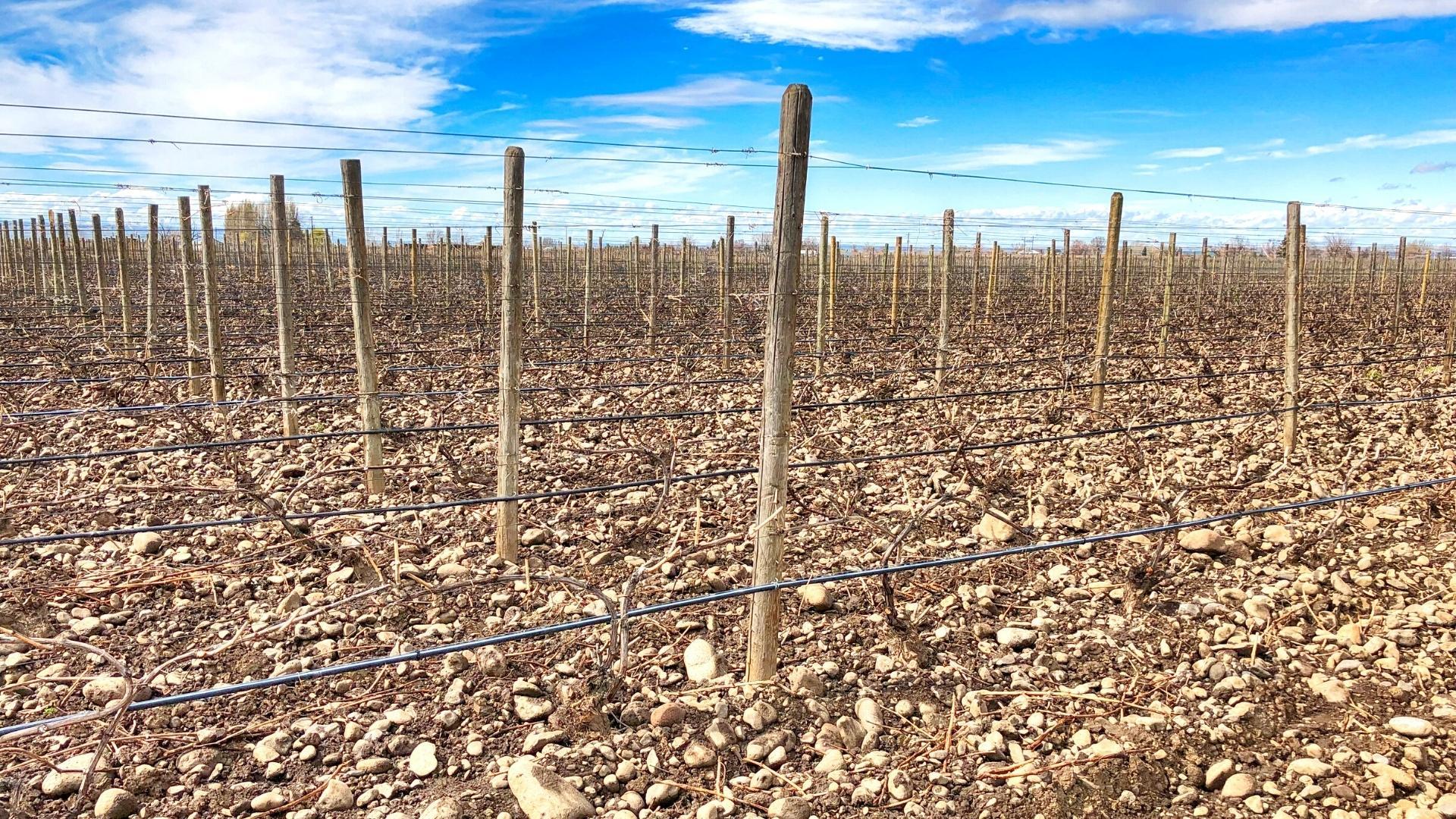 Growing up, I had one of those Matryoshka (stacking) dolls. Inside one was another. Inside that, yet another. Until there was one so small, the size of the tip of my pinkie finger, that no longer broke open. That teeniest wooden doll is comparable to The Rocks District of Milton-Freewater. See, The Rocks District sits entirely inside the Walla Walla Valley AVA, which is enveloped in Washington State’s massive Columbia Valley AVA.

Receiving official approval from the TTB in 2015, and at 5.9 square miles (or 3,767 acres), The Rocks District sits just six miles (10km) south of the Washington-Oregon stateline and is one of the most distinctive AVAs in the country. It’s the only one with boundaries shaped by a single soil series (Freewater) and a land form (alluvial fan).

Uniquely, that’s not the only thing that draws the attention for wine enthusiasts. It’s the parallels with the Rhône Valley in France. From climate (yes, heat!) to rock-lined vineyard rows, The Rocks District receives global recognition for growing Rhône grape varieties, particularly Syrah, which is responsible for 40% of the AVA’s plantings.

The Rocks District of Milton-Freewater Terroir

Erosion is credited for giving The Rocks District its distinct landscape. It all starts to the region’s east, with the Blue Mountains leading into the two forks of the Walla Walla River. These two forks moved rocks and soil through the region, creating an alluvial fan of well-draining basalt cobbles.

Sound familiar? It’s a similar story in France, where the Rhône River deposited alluvium and rocks known as pudding stones (galets roulés), made famous by the Châteauneuf-du-Pape wines in the southern part of the appellation.

In The Rocks District, the river’s power is essential for how it feeds and changes the landscape and rounds and changes the rocks it deposits along the way. But while the AVA is defined by its cobble-dominated soils, some differences exist. Closest to the mountains in the eastern and northern sections of the AVA, the soils are primarily cobbles. Moving south, they become more prominent in size. And in the west, further away from the ‘Blues’ (as locals call the range), vineyards contain smaller cobbles with more integrated silty loam.

Rocky soils (it’s up to you to call them galets roulés, cobbles, or even stones) absorb the sun’s heat and slowly release that warmth into the ground at night. They play an integral role in ripening grapes, also helping reflect light to the vines and leaves. The rocky, stone-filled terroir produces ripe, concentrated, full-bodied, and intense wines.

Eastern Washington and Oregon vastly differ from the mass interpretation of the rainy and cool Pacific Northwest climate. The Rocks District and Walla Walla Valley AVAs are in the desert with a continental climate. It’s a warm but short growing season with cold winters. Yet another reason to value the rocks and their ability to release heat even after the sun goes down.

Yes, winters are cold. It’s not uncommon for temperatures to dip below freezing in December and January. Fortunately, in The Rocks District of Milton-Freewater, vineyard elevations range from 800 to 1,000 feet (245-305 m), lessening the risk of frost.

However, the growing season is warm, with average temperatures between the high 70s and 90 (°F) in June, July, and August.

On average, the AVA receives 12 inches of annual rainfall and 2,935 Growing Degree Days (or GDDs). Less than 3,000 GDDs fall into Level II of the Winkler index. Comparable wine regions include Italy’s Piedmont and the Douro Valley in Portugal.

The Northern Rhône, which grows renowned Syrah, is technically a Winkler level III, with 3,027 GDDs. But that’s only a difference of less than 100 from The Rocks District.

Labeling Politics of The Rocks District

It would be impossible for the Rocks District’s 25-ish winery members to source all their fruit from the area’s 472 vineyard acres. There are about 130 additional acres in development over the next three years, but it’s still not enough.

As a result, there’s often a lot of cross-border grape sourcing. Even though a Rocks District winery could do all of their production inside the AVA, the wines won’t have the AVA on the label if they’re sourcing grapes from outside the area.

In contrast, some wineries on the Washington side of the valley that source grapes from The Rocks District can’t label them as such because their bottling and production facilities aren’t in Oregon. In these instances, it’s possible to have a wine made from grapes that grow in The Rocks District however isn’t allowed to have the AVA’s designation on the label.

Wines with The Rocks District AVA on the label do exist, though they can be challenging to come by. Designation aside, The Rocks District estimates producer production of around 75,000 cases. In comparison, the Walla Walla Valley AVA is more than five times that.

The lesson here is that it never hurts to read back labels and ask questions in the tasting rooms or wine shop when looking for a gem among rocks.