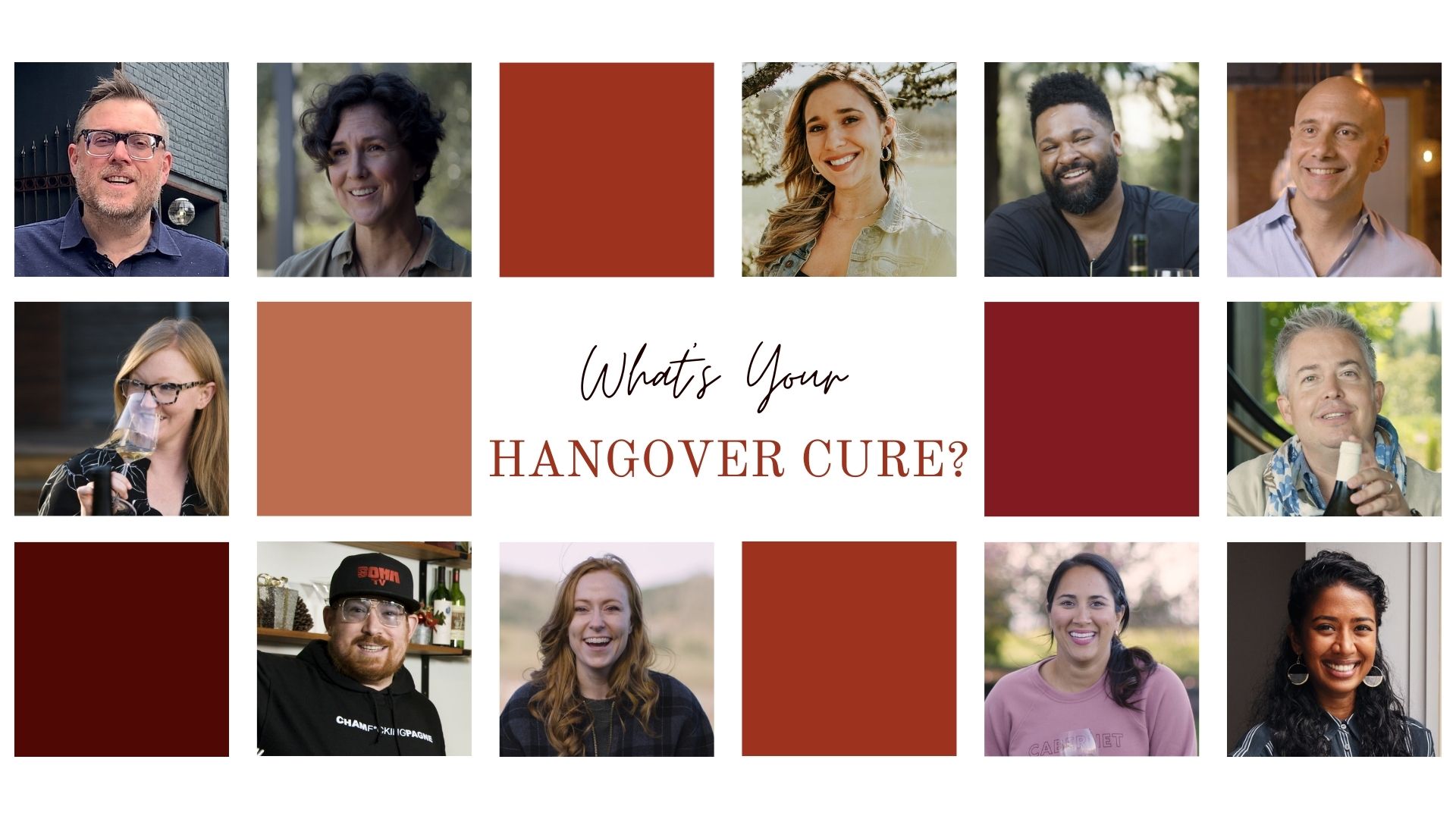 It’s safe to assume that most drinkers, at some point in their life, have entered an online search containing the words: ‘how to cure a hangover’. If they’re lucky, some recognize the impending hangover the night-of, and pose the question wondering if anything can be done at the time to help solve the following day’s doom. Most hangover cures, however, are sought out the next morning, upon waking up and instantly feeling the pain from the affects of the previous night.

After a night of too many wines, spirits or everything in between, most people have their go-to remedy to help the symptoms subside. Most websites offer a combination of coffee, green juices, or a concoction of painkillers. But we wanted more solid, tried and true advice. We turned to the SOMM TV cast who deal with alcohol as part of their career. If anyone has a great cure for a hangover, it’s them!

So, we asked and here’s what we heard…

By not getting drunk. —DLynn Proctor

I’m in my thirties, so there is no such thing as a cure for my hangover. I live with the terrible decisions I made the night before by suffering for the next day and a half with absolutely no remedy. Sometimes a Bloody Mary does help, though – hair of the dog, am I right? —Claire Coppi

Step one: don’t get hungover. Next: fire up a joint. Finally: take a nip of Fernet Branca. Bob’s your uncle. —Matthew Kaner

A hangover is a perfect time to lie in bed contemplating the worst decisions ever made in one’s life. Drink water. Alternate between sparkling (to calm the stomach) with still (to hydrate the body). And do your best not to move. If you have a fainting couch, that is the ideal place to live out the drama of the moment. Let the hangover fully take over through the morning and into the afternoon. If you are determined to beat the hangover, the best thing to do is go for a hike (again, with plenty of water). A hike burns the headache and nausea right out of your system. When possible, though, I prefer to sink entirely into the discomfort of the hangover and ruin my whole day instead. It’s the only way to make the revelry of drinking feel like an accomplishment instead of just a party. —Elaine Chukan Brown

In my experience, the best way to cure a hangover is to prevent it in the first place. Here’s a trick I picked up from a pharmacist in Toronto. Before heading to bed – especially after one of those nights where the bottle count equals the body count – take two aspirin and a Dramamine with a big glass of water. Yeah, Dramamine, the motion sickness med. The aspirin does its thing while the Dramamine helps with a restful night of sleep without tossing and turning. In the morning you are truly restored and the tranquil night of sleep gave your liver a fighting chance at cleaning out that one last bottle you ‘just had to open’. Pro tip: Break the Dramamine in half if the full dose leaves you a little drowsy in the morning. —Jonah Beer

Very hot shower, massive amounts of mint tea, sparkling water. And an extra large order of McDonald’s french fries. I’m not sorry about it. But now that I have a puppy movement is a necessity. It dragging me around the neighborhood multiple times a day actually helps dissipate the fog pretty quickly. —Sarah Thomas

Lots of water, some aspirin and bacon & eggs. —Jeff Porter

By not drinking too much! But I know that’s not always how it happens. I’m a believer in vitamin B12 for a comeback. So, I’m reaching for fermented foods like kimchi or miso with my fried eggs. That or a perfectly toasted ‘everything’ bagel with cream cheese. —Maryam Ahmed

I try to avoid hangovers at all costs! Alternating water with wine and spitting are a must. If I’ve over indulged, my list of hangover cures includes a combination of a fresh green juice, an easy hike, B vitamins, Phở and Advil. If I know I’m going down and there is no hope, I scrap that list, go for a pimento cheese breakfast sandwich and accept my fate. —Meghan Zobeck

Go back to sleep. —Sabato Sagaria