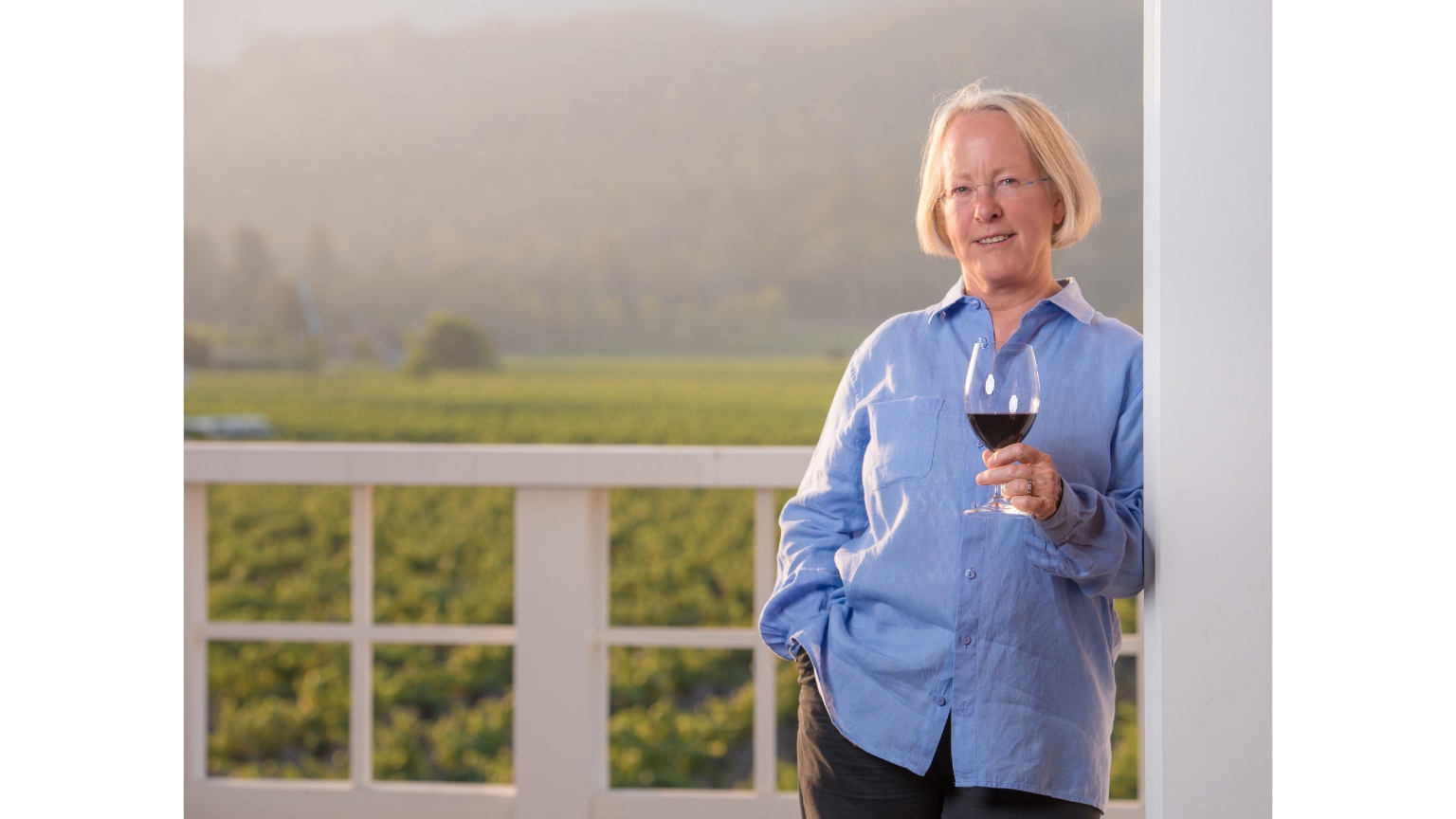 Cathy Corison is a winemaker in St. Helena, California and undoubtedly a trailblazer. Spanning her career, she has paved the way for many female winemakers and was named the San Francisco Chronicle Winemaker of the Year in 2011.

Her first glimpse into the wine world was in 1972. She signed up for a wine tasting class on a whim during her biology studies at Pomona College. She became impassioned, and despite being significantly outnumbered by men in the industry, pursued her undeniable calling to be a winemaker.

After completing her Masters Degree in Enology at UC Davis, she landed positions at Freemark Abbey, Yverdon, and Chappellet Vineyard. In 1987, Corison felt another calling. She not only wanted to make wine, but she also wanted to create her own. With a particular draw to Cabernet Sauvignon that expressed both power and elegance, she and her husband founded Corison Winery.

Since its inception, making wine with integrity has been vital in Corison’s road map. Her Kronos Vineyard has been sustainably farmed for 20+ years. Organic farming practices have been a priority since the beginning as well. With water being such a challenge in California, Corison also focuses on dry-farming.

Read further to find out Corison’s view of being innovative in the wine industry.

What aspects of your personality makes you a natural innovator?

The same personality traits that help me make wine also promote innovation: attention to detail and good observational skills. I’m curious and learn something new about wine every day. Wine can always be better.

When did you realize that you were an innovator?

Early in my career at Chappellet, I became aware that much of what I learned in school regarding wine acidity did not apply to Napa Valley Cabernet Sauvignon. I had been taught that wine could only be sound and age well at very high acidity/low pH. By then, Chappellet Cabernet was already renowned for its quality and longevity at higher pHs typical of mountain wines. Learning from that observation, I have not acidulated a Cabernet in forty years. I also handle sulfur dioxide additions differently than most, adding none at the crusher. Only after malolactic fermentation is complete do the wines get their first sulfur. This allows me to bottle wines with very low levels.

Describe the moment in your career when your passion for wine shifted to focus on the business of wine.

My passion for wine led me to start my own label when a wine inside me needed to get out. It was powerful AND elegant, spoke of time and place, graced the table and enjoyed a long, interesting life. This was my vision, not someone else’s. After a few years, I forced my focus to shift to the business of wine because if I didn’t sell it one year, I can’t make it the next year!

Describe a time when you were sure you couldn’t accomplish what you were hoping for but ended up succeeding.

The entire decade of the 2000s was exceedingly difficult for small family farms and wineries. It started with 9/11 and ended with the Great Recession, almost killing our business. It also coincided with a turn toward a very ripe style in many Napa Valley Cabernets. We made it through by sheer stubbornness. In the end, I couldn’t leave Kronos Vineyard.

How do you foster innovation among those on your team/colleagues?

We’re always trying to make things better. I try to listen. Our employees have been here for a very long time and often see some things that I don’t.

What kind of innovation are you excited to see in the wine industry? Either in the near or distant future.

Back in the 1980s, winery equipment became much more gentle at every step. That was huge all over the world and contributed to a significant increase in wine quality.

Interestingly enough, today, the most important innovation I see is in the vineyard, which oddly circles back on tradition. Over the last few decades, we have learned so much about canopy management, tweaking the balance between the vigor of the vines and the fruit they ripen and managing the amount of air and light in the fruit zone. I am still fine-tuning the way I manage canopies on the morning-sun side of the vines vs the afternoon-sun side. I have long removed all laterals in the fruit zone on the morning sun side but left much more cover on the afternoon-sun side to avoid sunburn. Now I wait until veraison is complete to remove laterals on the afternoon-sun side. At that point, the grapes have their natural sunscreen (pigment) on. This promotes the lignification of the seeds, allowing me to pick ripe grapes at lower sugar levels.

It looks like (self-driving?!) electric tractors will soon become part of our landscape. With our solar panels on the winery roof, our carbon footprint will be much reduced. I’ve also begun to take advantage of cutting edge Tule technology for measuring plant water status and Coastal Viticultural Consultants’ powdery mildew spore traps. As a result, we irrigate less and spray far less sulfur for mildew control than in the past.

What wine region do you believe is being the most innovative with their winemaking?

I know Napa best, and there is impressive innovation going on here. I would add one caveat, however. We all must be careful to keep our eye on the forest as we focus on the trees. Great grapes make great wine. Period.

If you had $1 million to implement a new idea to push the industry forward, what would it be?

I would send crews through the vineyard more often. The timing of operations is everything. Vineyards are never perfectly uniform, and every vine counts.

And because wine is meant to be fun, what’s your go-to beverage after a long day?

I’m on a huge Barolo jag at the moment. I love the combination of power and elegance and the wonderful floral perfume.