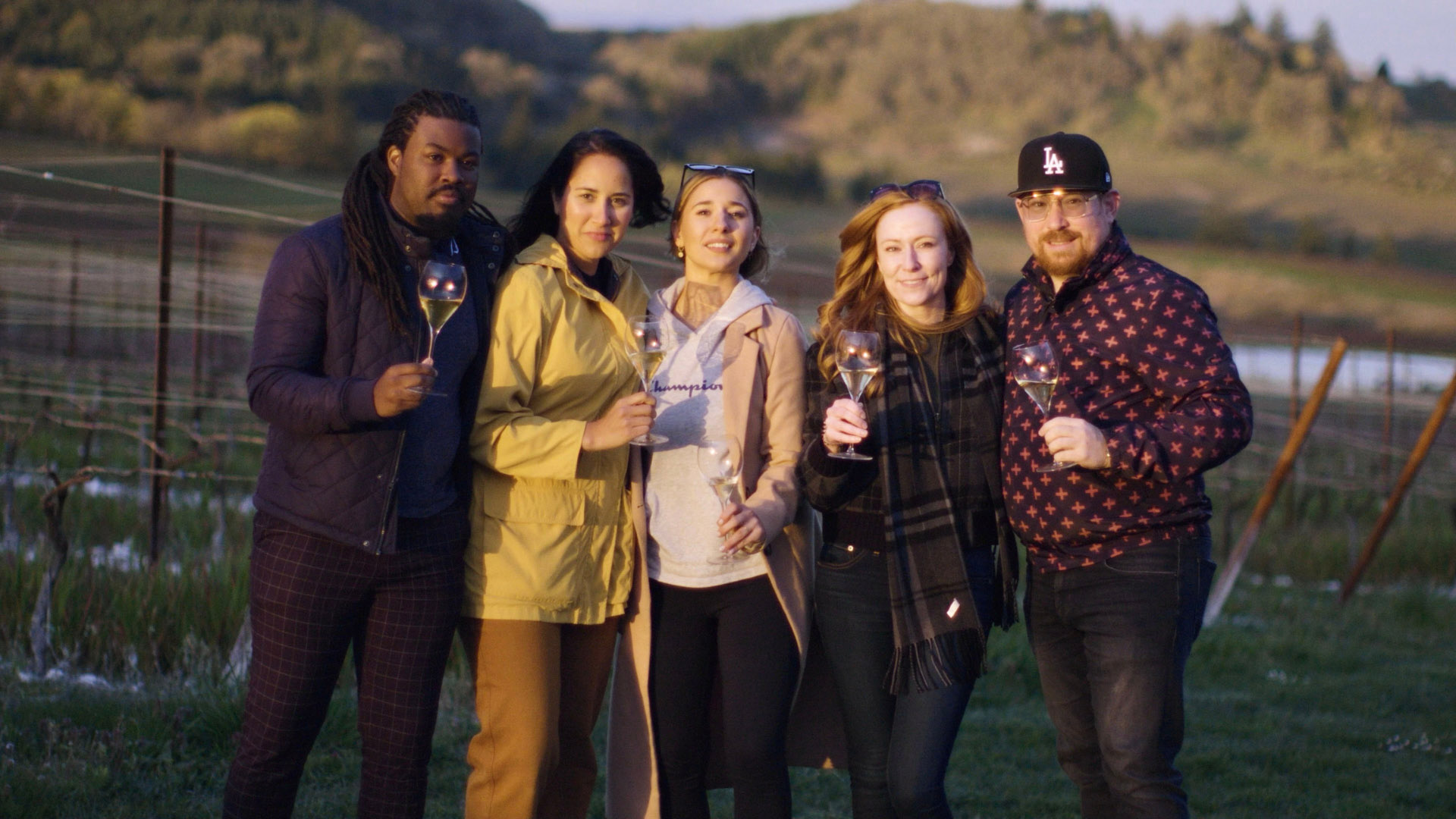 There has never been a cooking competition quite like this before. Nowadays, it’s easy to stumble upon a show that focuses on a specific aspect of food. From grilling to baking, it’s been (overly) done. But wine? Now we’re talking. And not just any wine. Bubbly, refined, and forever a fave – sparkling wine! SPARKLERS on SOMM TV is just that, a competition that pits five wine pros against each other in the kitchen while highlighting sparkling wine.

In celebration of the first two episodes dropping on SOMM TV, let’s dive into what makes the show unique. From the cast and special guests to the wines and how the competition is judged, here are some things to know about SPARKLERS.

Of the five competitors, only two have dabbled directly in the food industry. Maryam Ahmed is the former director of public programs for The Culinary Institute of America (CIA). Currently, she’s a hospitality entrepreneur based in Napa and owns Maryam + Company, a collaborative consulting firm focusing on food and wine brand development.

Also from a foodie background is George Walker III. After graduating from the Culinary Institute of Michigan, Walker discovered his passion for wine and is now the national brand ambassador at Wade Cellars in Napa, where he also looks after winery operations.

Both Ahmed and Walker have made appearances on the SOMM TV Podcast. But SPARKLERS is their SOMM TV debut.

Going up against them are some more familiar faces from the streaming network. Meghan Zobeck is the winemaker at Burgess Cellars and has contributed to recent episodes, including Harvest Season: Napa 2021 and Drink a Bottle.

Matthew Kaner is an LA-based sommelier and restauranteur. He’s seen all over SOMM TV and recently wrapped season one of The History of Wine Podcast.

And finally, Claire Coppi is also a sommelier and a familiar face to subscribers of SOMM TV. Based in Los Angeles, Coppi is a CMS Certified Sommelier, has completed her WSET level 3 and is also a Certified Sherry Wine Specialist.

The Judges and Special Guests

One of the unique things about SPARKLERS on SOMM TV is the mixed judging format. Totalling 13 episodes, some episodes see the competitors critiquing their peers and picking a winner. In contrast, other episodes feature special guest judges.

The guest judges range from wine industry innovators, like Greg Lambrecht, the founder and Chairman of Coravin, to hospitality experts, like Chevonne Ball.

In episode one, competitors are asked to make their perfect bite featuring honey judged by Emily Schmiedel, a master beekeeper in Oregon.

Other guest judges include Katie Flannery, a third-generation butcher in San Rafael, and Ben Jacobson, founder of Jacobsen Salt Co.

The sparkling wine featured in episodes one and two are from Oregon’s Lytle-Barnett. From Brut to Blanc de Blancs, Lytle-Barnett draws inspiration from French tradition to create their authentic, traditional-method, vintage-dated, Willamette-Valley expressions.

In future episodes, viewers will see the competitors pop corks from Italian houses such as Ca’ del Bosco and Villa Sparina plus iconic French brands such as Faire la Fête, Ruinart, and Krug.

Make sure to grab one of the featured bottles, available on Vivino, so you can sip while watching future episodes.

In the first episode, the challenge is to create the perfect bite using honey and only four additional ingredients. Scroll for the results.

In episode two, this time in teams of two, competitors go foraging for their ingredients to create a dish where mushrooms play a starring role.

For more fabulous food, exciting competition, and to see who takes home the grand prize, subscribe to SOMM TV. A new episode of SPARKLERS drop every Tuesday from now until the finale on February 8, 2022.

Use code “SPARKLERS” at checkout to get 50% off your 1 year subscription to SOMM TV!