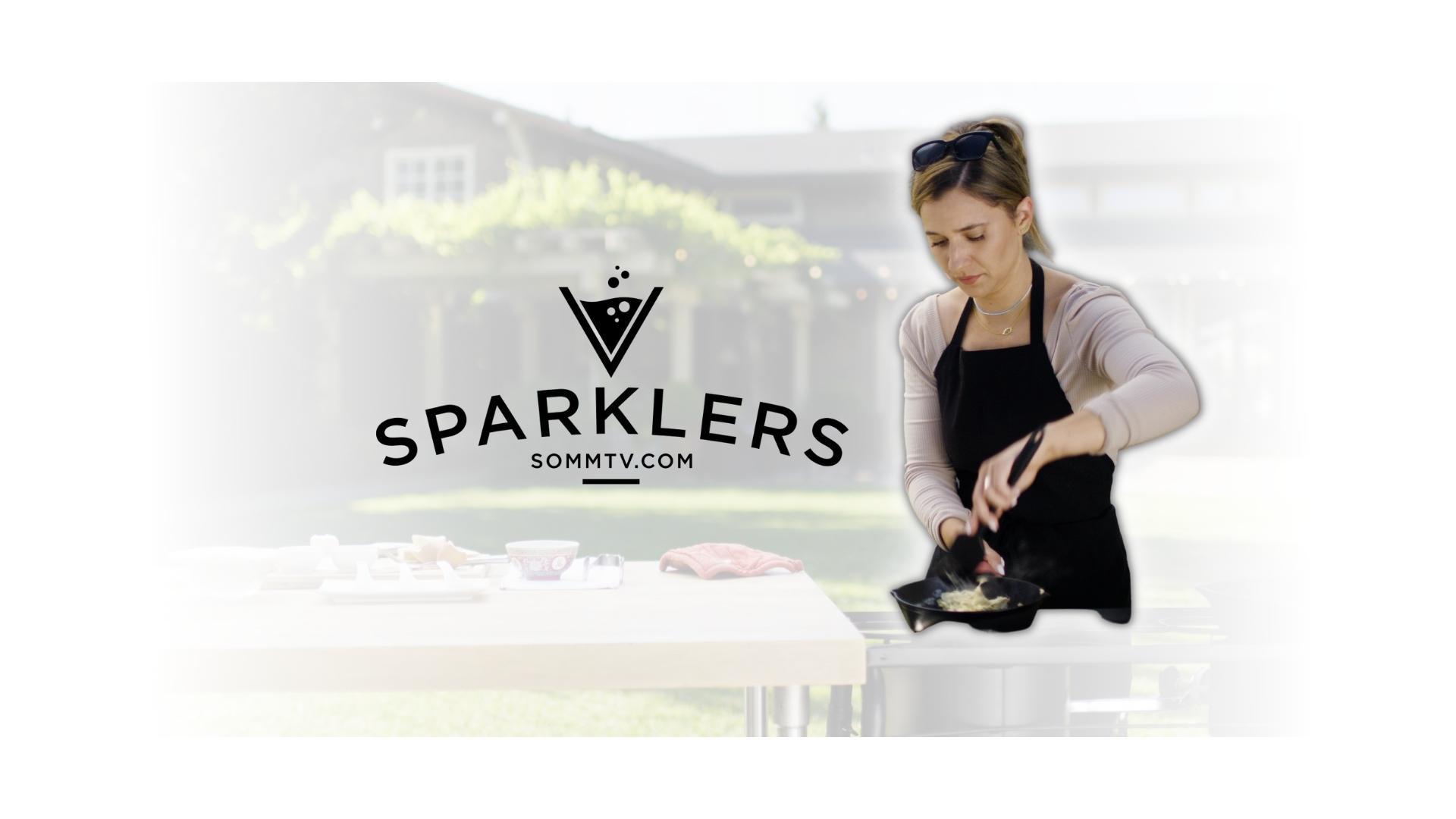 “We want you to be a cast member on a competitive cooking show we’ve created for SOMM TV.” I barely had time to process the panic and doubt welling up inside of my chest before I heard my voice say, “yeah, of course. I’m in!”

I had just put myself in a terrifying position – one susceptible to very public failure. Fortunately, these situations foster the most significant growth. And yes, I ended up winning the competition. But my time on SPARKLERS allotted me so much more than bragging rights and a first-place prize.

From Home Cook To On-Set Chef

I am not a chef in any sense of the word. I love cooking at home, but that is safe turf. Clad in the stretchiest of clothes, I turn on some music, pour myself a glass of wine, and dance across the room to retrieve utensils that I could locate in the dark. There are no time constraints, alien ingredients, challenging techniques, or cameras pointing at me.

I have worked in some of the world’s best restaurants, learning from teams of expert line cooks, dissecting the balance of a dish, and pairing it with the greatest of wines. But I had no idea if that would translate into the kitchen on the set of SPARKLERS.

Panic and doubt overwhelmed me again, walking onto the set on the first day. I thought to myself, “why have I put myself in this position? The other competitors know how to cook. I am going to look like an idiot.”

However, after looking around at the crew and fellow castmates, I felt an immediate wave of calm. Nerves are present in every one of us, but surrounding me in this scenario were some of the biggest smiles and most beautiful souls I will ever have the pleasure to know and work with.

Quite simply, these people are the ones that pushed me forward – to grow both in and out of the kitchen – and eventually, win the entire competition.

I busted my butt on that show. The environment forced me to grow and learn very quickly. Little things proved disastrous in earlier challenges, but I learned to adapt or avoid them. I picked up techniques and tips from the other four castmates. I took risks and put techniques into action that I had previously witnessed from the sidelines. Most of all, I had to let go of the things that I couldn’t control.

After prepping, planning, and rehearsing a dish in my mind more than a dozen times, I had to let go and trust. Putting a chokehold on uncontrollable things will only take you down. I have learned this lesson repeatedly over my life, but it indeed seemed to stick in the kitchens of SPARKLERS. I grew as a person and became kinder to myself through this experience, which I was not expecting in the least.

Releasing control along with forging unexpected relationships are my biggest takeaways from this experience. Any one of us could have won SPARKLERS. But none of us could have done it on our own. It may have been a competitive cooking show, but strangely, we were a team. We felt each other’s failures and celebrated each other’s victories. Both in front of and behind the cameras, we were (and still are) a family.

And while a grand-prize trip to France is, of course, ridiculously amazing, the real prize in all of this has been a unique and extraordinary family that I will have for the rest of my life. For that, I raise my glass to the cast and crew of SPARKLERS.