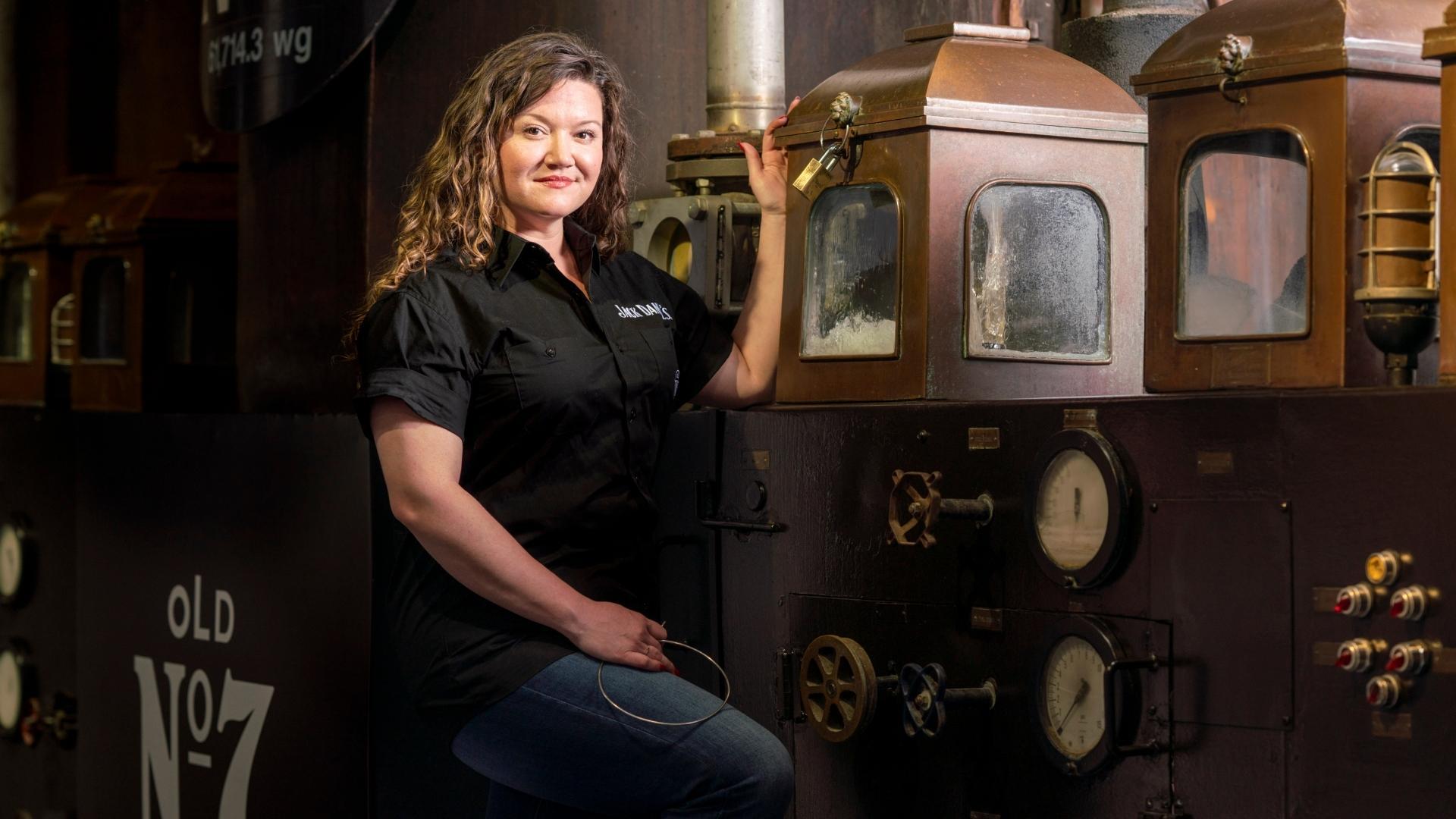 Lexie Phillips has experienced a lot of “firsts” in her career.

March of 2022 marked her first year anniversary as Jack Daniel’s assistant distiller, the first female to hold that title in the Tennessee whiskey maker’s 155-year history. That same month, she took her first trip as Jack Daniel’s brand ambassador, another facet of her role, to attend a speaking engagement in California — her first flight since the start of the pandemic. And while describing her career, Phillips recalls a few other firsts, too, such as her “first big-girl interview” that landed her a job at Jack Daniel’s distillery in 2013.

Phillips began her distilling career working part-time in bottling and quality control. She fell in love with the process. “To learn that we start testing our whiskey before it even leaves the barrel absolutely fascinated me,” Phillips says, “to see, what’s the color? What’s the proof? Where’s this going to fit best?” While new to the role, one person in particular made a lasting impact: “Her name was Jessica Hartline. She’s over at quality control and packaging now. She was a past whiskey maker and her stories of the still house just absolutely stole my heart.”

Phillips grew up and lives outside of Lynchburg in Estill Springs, Tenn. She holds an agribusiness degree from Middle Tennessee State University School of Agriculture, where she graduated in 2012.  “I’m from an ag background. It’s a very rural area. So I’m always outside. I’m not afraid to get my hands dirty,” she says. She counts her agricultural background, as well as being mechanically minded, as skills that landed her that first job at Jack Daniel’s. “After all,” she points out, “it’s a manual labor job.”

However, Phillips sees opportunity for women outside the distillery, too. “We need everything from farmers to barrel rollers, to quality control, marketing, advertising, and engineering,” she says.

Working collaboratively under head distiller Chris Fletcher, Phillips has ventured out of the stillhouse into a leadership role that is both public-facing and includes innovating behind-the-scenes. Since her promotion in 2021, she’s had a hand in the launch of Jack Daniel’s 10-year-old Tennessee Whiskey, the first age-statement label from the brand since Prohibition.

Above all, Phillips emphasizes teamwork and the importance of each and every role at the distillery. Below, she shares her vision for the future of women in whiskey, what it actually takes to be assistant distiller at one of the nation’s largest distilleries, and what special release bottles to look for from the brand later this year.

First of all, congratulations on your 1-year anniversary as Jack Daniel’s first female assistant distiller. How has the past year been for you?

Honestly, I’ll say a lot of ups and downs because of Covid. We had several things booked for travel and we kind of had to take a step back several times. But here at the distillery, it’s been really cool because we’ve done a lot of innovation pieces, and getting to work on those has been really awesome because coming from the distillery, I never really saw the brains behind it; I never really knew the thought processes. So being able to see that has been really cool — and to truly see them come to life in beautiful packaging, that’s been really awesome.

We hear a lot about “innovation” right now. What does that actually mean, and what’s on the table for whiskey right now for you?

There’s a lot between having the ideas and getting it into a bottle. I’m a distiller, I don’t really know as much about packaging or the labels. So there’s a lot of people involved that help execute the ideas, just keeping everybody on the same page, on timelines.

The 10-year-old, they put holds on that about six years ago. So it’s a long process, and you’re waiting on whiskey, too, so any ideas that we come up with — let’s say we’ve got this idea that we think we can bottle and execute in 2026 — well, around 2025, we’re still testing the whiskey to see if it’s ready, because that’s really the biggest determining factor. So I think the innovation council is a little bit of ideas, but execution of the ideas is one of the biggest parts, just bringing people together and keeping us all on the same page and timeframe.

It’s hard to imagine planning projects with that kind of timeline.

You’ve definitely got to be a patient person to work in the whiskey business. What we make today, you won’t even see it for at least four years and maybe even longer than that — 10, 15 years. So yes, it’s a patience game. And things coming out like the aged series, [the 10-year-old] was batch number one that we released last year. I know it’s kind of out that we are also going to do a batch two of 10-year-old and getting a 12-year-old out as well. So that’s really exciting.

Because Jack [Daniel], back in his day, he had a whole line of 10-, 12-, 14-, 18- and 21-year-old whiskey. We’ve either got those bottles or pictures of them. So that’s really cool to be able to recreate something that Jack did in his time. The label on the bottle mimics the label that he had on his bottle. It’s bringing a piece of history back alive.

What is something about Jack Daniel’s distillery that no one else knows?

How many people it really takes to make our product. Strangely, me and Chris [Fletcher, head distiller] get all the credit. But we have over 600 employees here and every single part of our process is so important that you couldn’t do it without one. It’s like a domino effect. If one process goes down, then pretty much everybody has to shut down. So as much as I’d love to take the credit of such a beautiful brand and bottle and liquid, it’s really a team that brings this whole thing together. And people don’t really always think about that.

… A lot of people that’ve never been here don’t know it’s a real place. [Laughs.] But it really is this tiny little town in the hills of Tennessee. And I can say that everybody that comes here [say] it’s different than you imagined. It’s more true than you imagine. There’s really the cave spring, you’re really burning the sugar maple, you’re really distilling every drop here…We’ve got six [stills] and we are running those almost 24/7, 365. If somebody wanted to start tomorrow and do that it’d be really hard. But I think us having the 155-year history allowing us to grow this big, we have so many quality control measures in place, that’s how we’re able to still make this true product.

How are your responsibilities divided between being assistant distiller/at the stillhouse and traveling as brand ambassador?

The day to day can definitely vary. Travel will be a big part of it. But while I’m here at the distillery, maybe leading VIP tours or tastings, I’m also working on the innovation pieces between me and [Chris] Fletcher, where we have an Innovation Council. So you know, those meetings and emails are very regular, just where everybody stays up to date. Also, the master taster panel where we’ll go through and select which barrels get to graduate to the single barrel lineup.

And then of course,  barrel selections: If somebody wants to come here and buy a whole barrel of Jack whether it’s a bar or restaurant or even somebody [with] their own personal home bar, being able to tell them the process of how that whiskey was made with full transparency, which warehouses it came out of and then go through the tasting of which flavors make up each one of them …  and that’s the majority of it. When I have downtime, I’ll still go over to the still house and hang out with them because that’s my absolute favorite part — the true process of making grain into 140 proof and all the stuff that goes in between.

How do you and Chris Fletcher collaborate? What about the rest of your team? Do you have many other women on your team?

Chris Fletcher’s my manager and then I’m under him and quality control is the other branch under him. He’s the director of quality control as well. There are several other women that are within quality control …  the microbiologist who holds our yeast strain and keeps it growing up each week… And at the still house,  we’ve got four women there now. I was the sixth woman ever, so we’ve had a total of ten. There are definitely a lot of women in here.

… I actually did a talk with one of our women’s groups here within Brown Forman, talking about my story, literally right before I came into my office to do this interview. And one of the ladies that was in there was Melanie Parsons, and she’s the first woman who was hired as an engineer here. This is awesome to see more women intermingle, letting people know that it’s possible, it is something that they can strive towards.

Coming up in the industry, working in whiskey at Jack Daniel’s, how has your experience changed over the years?

It was very intimidating to even apply to the still house knowing it was mainly male dominated. In the interview process, I guess it was kind of my first big-girl interview of like, 10 people in a room. Jeff Arnett [former master distiller] was there, all levels of the distillery, a couple of HR. There was one guy, he was my manager for a couple years, and he was like, “you completely sold me when you said that you could change the oil in your car, you can change the brake pads, you can drop the deck on a John Deere lawn mower without a YouTube video.” It’s right up my alley. I’m mechanically minded, and that’s what you need, because it’s a manual labor job.

And being intimidated — just a bunch of guys that I’ve never met before — I guess that I felt like I had to prove myself a little more. But really, that was not the case at all. They were so supportive because it is a team. Everybody wants you to succeed because it makes everything run smoothly. Having the male allies in there meant everything to me succeeding.

That’s a great point — it is very important to have all genders supporting all genders.

That’s it. It truly does help. I worked with the first woman ever [to be] a distiller at Jack. It was an awesome experience, because  she’d been here for like 40 years … and she taught me not to take any crap off the guys. It was very valuable to have a woman that’s done it before and [say] “Yeah, I can definitely do this.”

How will you use your influence to bring more people into the fold?

I think getting more women involved in the STEM field [science, technology engineering, mathematics] would be very critical to this industry. As fermentation sciences has grown over the last decade, I think we’re going to see a lot more women in the industry. Because when I was in school — I graduated college in 2012 — fermentation sciences was not that big. They didn’t even offer it at my school. Just having that on the forefront through the whiskey boom that we are in right now has really fueled that.

So I think more people are seeing what goes into the whiskey making process. It takes a lot of different jobs. You know, distilling is not the only thing. And I think really opening people’s eyes to that, letting them know that there’s a lot of different areas that you can grow into, I think that will help tremendously.

Ingredients Used To Make the 6 Most Popular Distilled Alcoholic Drinks