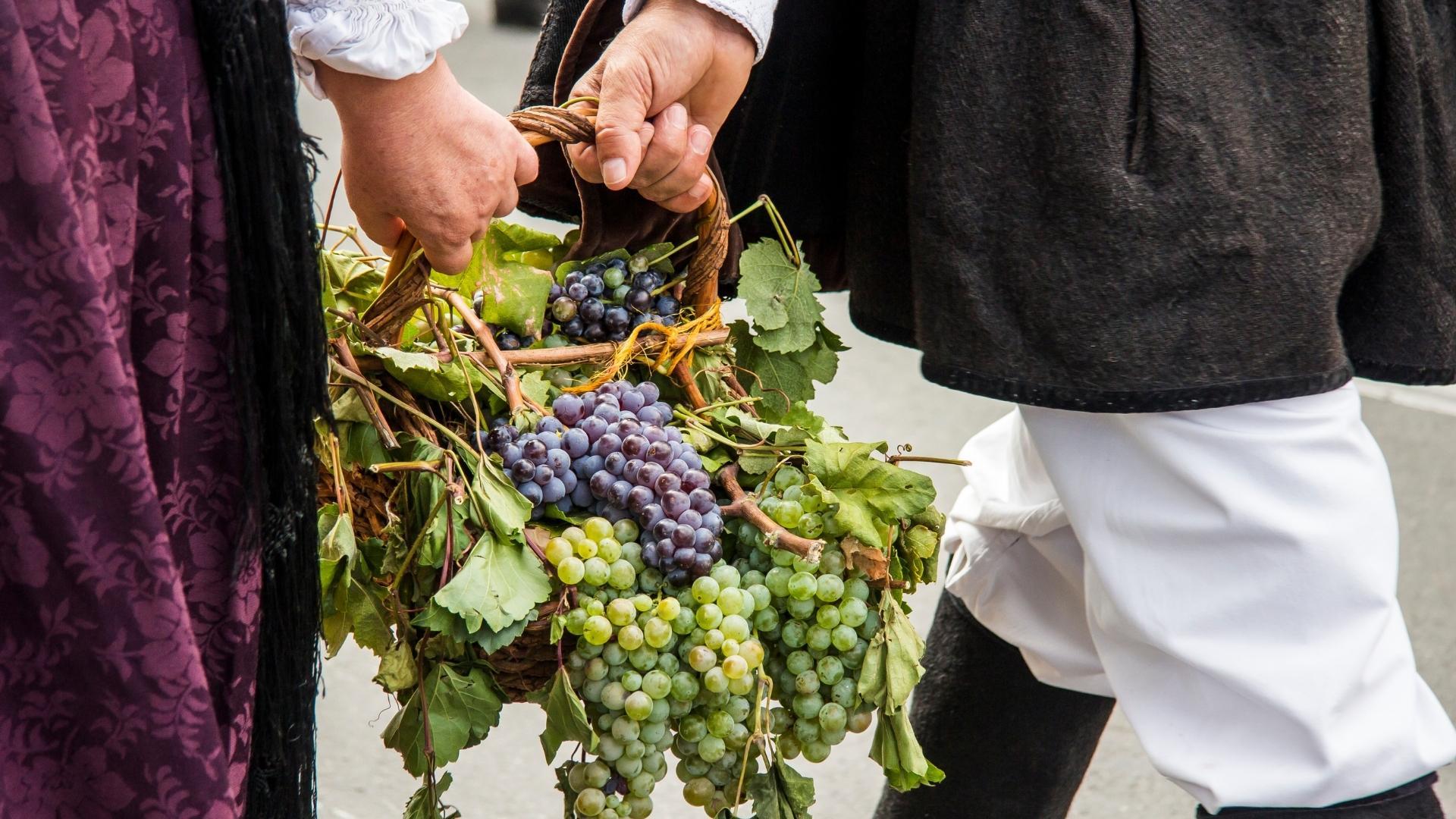 Once a part of the South of France but separated by tectonic movement, Sardinia has been cultivating its own wine identity for centuries. “Sardinia has been isolated for 1000s of years, and this isolation brought originality,” says Alfonso Gagliano, Sella & Mosca brand ambassador. “These differences are not just geographical, but also cultural.” The cuisine is different, and the dialect distinct. Not to mention, Sardinian grape varieties are expressly unique to the island.

Historians have traced the origins of its signature grape, Cannonau (Grenache), back to the region—much to Spain and France’s chagrin. Cannonau will always be an important part of the region’s legacy. Still, Sardinian winegrowers are shining a light on the other native grapes that grow in this wild and rustic landscape.

How Ancient Civilizations Shaped the History of Sardinian Wine

Sardinia sits directly across from Africa—you can practically see it from some of the southerly vineyards in Sant’Antioco. After Sicily, it is the second-largest island in the Mediterranean, with craggy mountains lining its turquoise coastlines. Its untouched beauty is showcased as far as the eye can see.

Indigenous Nuragic people began inhabiting the land at the beginning of the 18th century. They built nuraghe, fortress-like stone structures that still stand across the island today. While the island had seen inhabitants since the Paleolithic Age and was home to spans of civilizations, including Phoenicians, Romans, Vandals, and Byzantines, none cultivated the essence of Sardinia more than the Nuragic.

The most important discovery was the Vernaccia and Malvasia grape seeds kept vital by the natural refrigeration of a Nuragic well. Studies determine that the Nuragic people cultivated these grape varieties for 600 years. This is when the Nuragus grape either arrived on the island or was born there. The grape takes its name from the mysterious nuraghe. Nuragus is one of the most widely planted white grapes on the island.

Sardinia is extremely proud of its 120 indigenous grape varieties, but they also like to flaunt the grapes they have taken under their wing. They share many varieties with Spain due to a period of Aragonese rule between 1324 and 1713. Vermentino, Torbato, Carignan and Cannonau are all of Spanish origin.

Cannonau became the region’s star variety when the connection was made between the abundant anthocyanins and polyphenols (or micronutrients) the grape boasts. Locals regularly live well into their 90s and even their 100s, making the island one of the world’s only five “Blue Zones”. These geographic areas see little chronic disease and are home to locals who live longer than anywhere else. Sure, Cannonau may make you a centenarian, but do you want to spend 100 years drinking the same thing?

Vermentino is the other Sardinian grape variety that consumers are most aware of. While there is conjecture as to whether the origins of Vermentino are from Piedmont or Provence, there is no question that Sardinia is where it flourishes. Locals boast that the Vermentino planted in Sardinia accounts for 75% of the plantings in all of Italy. It’s so important to the island that Vermentino di Gallura is the only DOCG in Sardinia. “It’s a perfect marriage—Vermentino and Sardinia,” says Sella & Mosca winemaker and vineyard manager Giovanni Pinna. “Vermentino adapts to our very hot summers.” In 1976, Sella & Mosca produced a Vermentino that was a declaration of modernity— lean and light, with high acidity—this style became the benchmark.

Sella & Mosca, orphanage for unloved grapes, also gets credit for reviving an almost extinct Spanish grape—Torbato. They are now the only producer of Torbato, which they use in their single-varietal sparkling wine and still version—Terre Bianche. Torbato is ideal for sparkling wine because it’s neutral in aroma and flavor and has great natural acidity. These wines are doing so well in the U.S. market that they have begun to increase production. “Torbato tells a story of uniquity—it’s a love story between Sella & Mosca and this variety,” says Gagliano.

Carignano, or Carignan as more consumers likely know it by, is another Spanish grape and grows primarily in southern parts of the island. It has been growing in Sulcis since 1932; however, Carignano del Sulcis D.O.C. didn’t become official until 1977. The Iglesiete Mountain Range and Cape Teulada form a natural enclosure for the microclimate. It flourishes in the mineral-rich soils left from the island’s historic mining and prospers in sandy Mediterranean bush cultivation.

Cantina Santadi and Cantina Mesa have done considerable work bringing this variety to the fore. When Gavino Sanna left his career in advertising to open his winery, he felt like he was coming home. The name “Mesa” translates to “table”—the gathering space of all homes. “Wine has always been attached to social congregation and moments of sharing,” he says. When asked about his dedication to the Carignano grape, he replied, “Carignano thrives in our little corner of Sardinia and creates its own identity and varietal expression.”

Santadi are true pioneers of Carignano. Founded in 1960, their social cooperative has 650 hectares and grows 65% of Carignano del Sulcis DOC that they export to over 40 countries. “Because of Antonello Pilloni (president) and winemaker Giacomo Tachis, our flagship wine, Terre Brune, transformed the Sardinian market when it was launched in 1988,” says Massimo Podda, GM. “Now, many other wineries dare to do the same.”

Other innately Sardinian varieties are excellent expressions of authenticity, like Nuragus, Monica and Nasco. Nasco is the base for Santadi Latinia, an unctuous dessert wine. Capable of high yields and resistant to many fungal diseases, Nuragus has earned many nicknames ranging from “pagadepidu” (debt-payer) to “burdu” (bastard). Santadi and Argiolas lead the helm with their interpretations of the ancient grape.

Cannonau faces the obstacle of rising temperatures in an already hot climate. According to a case study by AGRIS, “the influence on Cannonau wines could cause a higher alcohol content but at the same time a lower content in anthocyanins and polyphenols.” Although Sella & Mosca succeeded in making a light style Cannonau, it’s not an easy task. “Cannonau tends to be higher in alcohol—it’s a sugar machine,” remarks Pinna. In contrast, Carignan is an easier grape to vinify with a fresh outcome because of its naturally high acidity. Plus, it’s naturally high-yielding and requires little water.

At 95°F (35°C), a vine will shut down photosynthesis. Some wineries combat this with “caolino”—a naturally found white clay put on the grapes to reflect light and to aid in water absorption. In the Sulcis region, where Cantina Mesa sits, the influence of the sea also helps mitigate the summer heat. “The marine breezes refresh the vines, and the salty air guarantees the freshness and vivacity of the Carignano grape’s flavors and easy-drinking style,” says Sanna. “The winds play an important role in preventing fungal diseases deriving from the humidity.”

Other wineries use precision in their canopy management. Tenute Cau focuses mainly on Vermentino, Ciliegiolo and Barbera Sarda. “These grapes match the market demand—fragrant wines without aggressive alcohol levels—which is not easy in Sardinia,” says owner Carlo Cau. “In the vineyards, we play with as large a leaf system as possible and try to ripen the grapes in the shade, hidden from the direct rays of the sun.”

Cannonau has done great things for the region, but wineries don’t want to be one-note. “The culture of the consumer is increasing,” notes Pinna when asked about the success of Sella & Mosca’s Torbato in the U.S. “The new consumer wants to taste different grapes.” Not only is today’s consumer ready to explore their palates, but they also demand transparency. They are moving away from widely-available bulk wines and generic bottlings and seeking well-crafted wines that speak of a region. “The committed consumer is interested in diversifications—autochthonous wines offer a spectrum of sensations,” says Cau. “We aim for low alcohol but a big impression with our new production of Barbera Sarda.”

Avoiding being pigeonholed by one style of wine and a respect for its history brings attention to these intriguing Sardinian grape varieties. Consider the excitement of discovering a mystical nuraghe and similarly delve deeper into the secrets of this wine region.