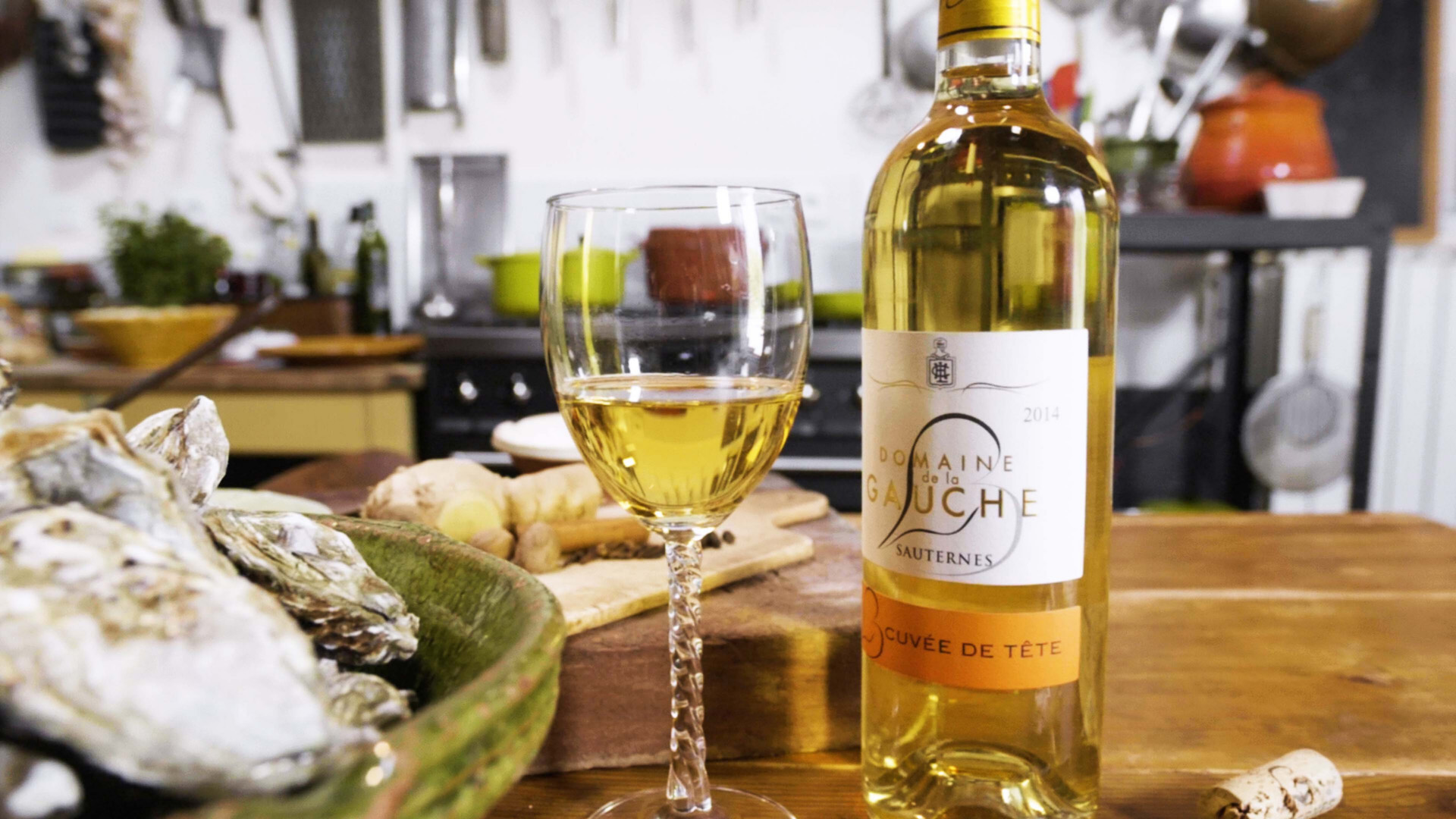 Cooking With Wine is on SOMM TV and features renowned chef Kate Hill as she cooks through the regions of France. With over 30 years of experience and teaching students worldwide, episode 4 features Kate taking viewers on a culinary journey to Bordeaux. Create Les Huîtres et Saucisse & Sabayon au Sauternes (Oysters & Sausage with Sauternes Sabayon) at home with the recipe below.

Choosing a recipe for the Bordeaux region was a bit of a puzzle. I have tried to avoid the apparent clichés as we moved through the well-known regions of France, pairing a style of wine rather than a specific vineyard or grape varietal. In Bordeaux, the obvious choice is a big deep Cabernet Sauvignon from the Medoc paired with Lamb, or a generous Côte de Boeuf. But I have a fondness for the quieter backroads of Bordeaux’s inland. There is one that leads to a modest village spoiled for choice with wine shops that gleam golden like Ali Baba’s cave and reflect the singular wine produced here – Sauternes. As often as not, the late-harvest botrytis-affected Sauternes bookends a great meal: served with foie gras before; with desserts after. This recipe is a cliché buster yet stays within the traditional techniques of cooking with wine while expressing a taste of Bordeaux.

Sabayon is a classic wine sauce. Often, it uses Champagne or another dry white wine. But for this recipe, we’re using a sweet Sauternes. By adding the Sauternes to the oysters during the poach, the oyster flavor is coaxed into the wine, creating a sweet and briny broth that gets whisked into the rich egg yolk foam. Popping the barely cooked oysters, sausage and sabayon under the broiler for a few minutes results in a golden browned gratin spilling out of the oyster shells and into your mouth. Obviously, drink alongside a well-chilled glass of Sauternes.

2. Prepare the sausage: break up the sausage into a crumble, add the quatre-épices, heat in a pan until barely cooked, but do not brown. Set aside.

2. Place yolks into a sauce pan, add a couple tablespoons of the warm Sauternes to temper the eggs. Begin whisking over a low flame adding most of the liquid into the yolks. Whisk continually until it starts to stabilize and thicken (about 5 minutes). You want to form a thick foam with no liquid left in the bottom of the pan. All the egg yolk and wine should be in suspension and the sabayon should thickly coat a spoon.

In this clip from Bordeaux – Sauternes, we prepare the sabayon.

2. Place a spoon of cooked sausage into the bottom of the shell.

3. Place barely-cooked oysters on top of the sausage.

4. Cover and fill each shell with the sabayon until it is full, full, full.

5. Cook under a broiler until the sabayon starts to gratinée and brown. Remove and eat while warm with a glass of well-chilled Sauternes. Bon Appétit!