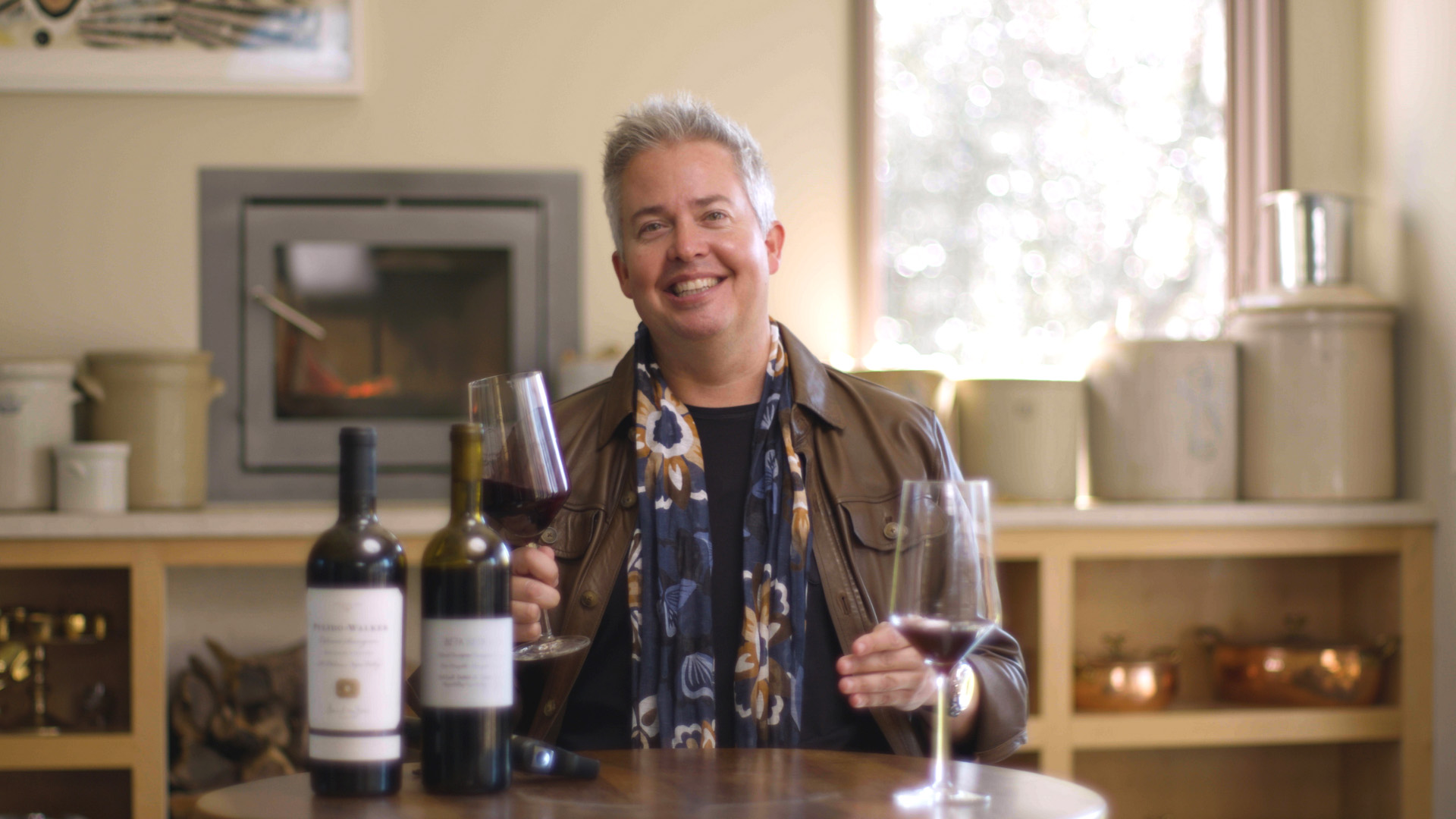 With nearly no experience in the wine industry, Jonah Beer took a leap and moved from Indiana to the Napa Valley. Having no qualms about starting as a glasswasher, Beer quickly found himself rising the ranks at Stag’s Leap Wine Cellars and traveling and rubbing shoulders with Sir Richard Branson and Liam Gallagher.

Currently, it’s tough to crush a grape without his hand having a part in it. He’s the former Vice President of Frog’s Leap Winery, a partner in Nicolas Jay, vintner of Pilcrow, and owner of True North Wine Merchants. The latter two of which he works joyfully alongside his wife, Sara. Additionally, he commonly makes appearances on SOMM TV, most often on Blind Tasting Sessions and Tasting Notes episodes.

Here, we get to know Jonah as he so colorfully tells us about his wine journey.

Not even close. I moved out to the Napa Valley from northern Indiana because I fell in love with that one bottle and the dream of a life of fine wine and elegant living. Looking back on it, I moved to California without much of a plan. I didn’t know anyone west of the Rockies and had no place to live. I didn’t have much relevant experience (other than that wine list I wrote for the Ramada Inn, dope).

My early days of “elegant living” were marked by sleeping on floors, in my car, and eventually on a sailboat in Alameda, CA. So, not the start I had drawn up in my mind. But it all fell into place when I landed my first j-o-b in the wine biz.

What was your first job?

Glasswasher at Stag’s Leap Wine Cellars, a job that I quickly retitled to “Crystal Engineer.” It sounded better to the folks back home and undoubtedly sounded like it paid more than the $5.15 per hour. But truth be told, I landed in the perfect spot. A farm boy from the crossroads of America with the work ethic taught to him by Hoosier farming legend Maurice G. “Morrie” Beer stood out like a sore thumb amongst my fellow engineers. After receiving a promotion that included t-shirt folding, I was off to the races.

My next stops were tasting room minion and tasting room host. Next, VIP Customer Lead, to California Sales Manager, to Director of Sales & Marketing. That last one had me hustling Napa Cab in all 50 states and 18 foreign countries. And all that in my first two and a half years. Meteoric? You bet. All because of my skills? Nope.

Turnover was a big part of the old Stag. I didn’t mind taking a “promotion in title only” as long as it kept me moving forward. For sure, I was the only Sales Manager getting paid-by-the-hour, but I didn’t care. That dream of fine wine and (somewhat) elegant living was now a reality. Pinch me.

Good lord, no. The aforementioned Grandpa Morrie called it the “devil’s juice”. And my entire family—save one renegade cousin—steered clear of the perils of “spoiled grape juice”. No, neither fine wine nor fine dining was a part of my family culture. Casseroles and pop were on the Thanksgiving table, not Judy Rodgers’ brined, free-range turkey paired with Cru Beaujolais. And at the risk of sounding all nostalgic. I think that maybe my upbringing was perfect. The dining “culture” at Chez Beer might have been folksy, but it was bursting with love, joy, and fellowship. The three things I love most about my Napa Valley dining culture.

Who else could conjure putting the overly-scarfed boy wonder from Indiana on the screen to talk about wine than super-producer Armen Khachaturian? Anyone who knows Armen knows that he can sell. And that he did when he suggested that I do a Blind Tasting Session on camera wherein I could show off my tasting skills and guess Barbaresco for everything. I snagged super-star Meghan Zobeck to join me on screen, and the rest is history. I now own 73 scarves and can—on occasion—still get Meghan to take my calls between her blowing up the screen on Sparklers or wowing the world with her wines.

My primary job is my side-hustle. Or, as it would appropriately be described, just my hustle. My wife—the supertaster Sara Beer—and I started making wine together from up in the hills of the Napa Valley 7 years ago. Our wine is called Pilcrow, and it pays homage to the Napa Valley circa 1960. A wine made in the style of some of the old masters like Lee Stewart, Bob Travers, and Nathan Fay.

Along with trumpeting terroir, the wine is a bit of a throwback for those of us that missed the glory days when Napa Cabs prized grace over power. Like a DeLorean fitted with a Flux Capacitor, popping a cork on our wine is intended to land you back in 1955. Sara and I also own and operate (she does most of the operating) True North Wine Merchants, a boutique import and distribution company covering the great state of California. We focus on the wines we love; legit Napa Cabernet, lovely Piemonte wines, and elegant Burgundy. Why not make your passion your gig—am I right?!

Travel. Nothing compares to being on the Côte-d’Or and hiking between lieux-dits. Or seeing the exposition of Cros Parantoux relative to Richebourg. And yes. I can spot the douchebagginess of that sentiment. I’m not saying you must drink these wines to understand the differences (though, if you are on the Frog’s Leap expense account, why not?). You really can get it by just being there.

A bottle of Vosne-Romanée AC and a ham & brie sandwich overlooking the village from high on the Côte is an excellent way to know the place. And a marvelous way to drink in the terroir. To stay current, I wander into areas like Le Bout du Monde in Beaune. It is like the Cadet Wine Bar of Napa but with indoor smoking. Exceptional wines, better people, and run by a woman who loves to share the news of Burgundy.

Look, travel is expensive, but you can do it well and on a budget. Just don’t do it with Armen because he’ll have you convinced in a heartbeat that goings halfsies on a $1,200 bottle of Montrachet is a great bargain. He’s not wrong.

Wine has already taken me to damn near everywhere. I’ve been fortunate to spend a lot of time in Japan (a fantastic food and wine culture, and truly elegant living), all over Europe, and in all 50 of these United States. I’ve gotten drunk off Chablis and oysters with James Carville in NOLA. In Hong Kong, I was kicked out of a bar with Liam Gallagher. And I’ve watched my wife dance with Sir Richard Branson in the Caribbean all because of wine.

On the whole, as I settle into the back 9 of my life, it’s the people that wine has brought into my life that matter most. My dearest friends, closest ‘family’, and most joyful brothers and sisters are the many, many, many somms, chefs, servers, winemakers, salespeople, vigneron, and documentarians (shout-out to Jason B. Wise) that have made wine a part of their life. It is this community that matters most. In essence, I hope the future brings more wonderful people into my life and this club.