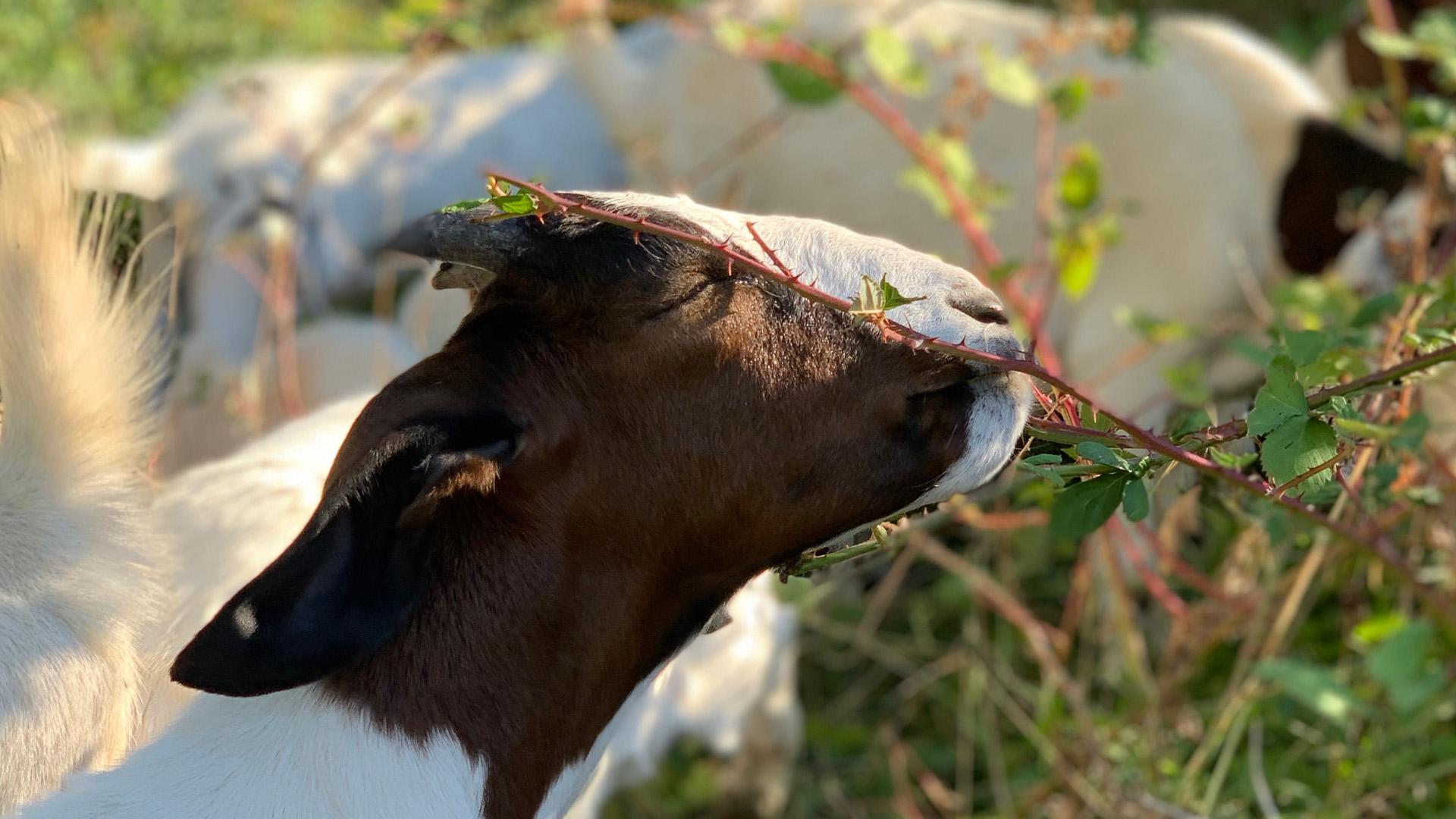 2020 is a vintage few would choose to repeat. In many ways, it changed everything. The hard lessons 2020 delivered in California’s wine country are causing profound changes to land management. In sometimes surprising ways, it is transforming people’s conceptions of the countryside. Moreover, seeking California wildfire mitigation is inspiring a return to a holistic, rhythmic approach to farming that often feels more 18th than 21st century.

2020 is globally notorious as the year the pandemic began. But in wine country, fire was arguably an even more corrosive plague. In 2020 in California alone, 4.2 million of the Golden State’s 100 million acres burned in four months. The devastation emit 112 million tons of greenhouse gases and killed 31 people, according to a Cal Fire report. Those fires cost the wine industry $3.7 billion.

There is a seemingly endless supply of blame to go around. Fingers point from climate change and carelessly discarded cigarettes to electric fences and equipment issues. But the biggest problem, and in some ways, the most difficult to grapple with, is land management.

“I think there has been a realization as an industry, but also in a larger sense as Californians, that there has to be a better way to live,” says Clay Shannon, proprietor of the Shannon Family of Wines. “I have grandchildren, and I worry about the world I’m giving them.”

Shannon, one of the largest certified organic winegrowers in Lake County, grew up in California, watching his grandfather raise flocks of Cordell sheep. His light-bulb moment was more than a decade ago after his 350 or so sheep he was raising on his 2,400-acre ranch accidentally got into the vineyard one day.

“When I came upon that scene, I was completely horrified,” he recalls. “But then I saw that the sheep had stripped the leaves of the vines. They then mowed the grass, and left the grapes untouched.”

Shannon’s approach to farming changed almost literally overnight becoming what he sees as a more holistic, ecologically responsible way. His new approach allows nature to manage the land instead of controlling it through a series of carbon-emitting mechanical processes.

He has eliminated four annual mows, and countless tractor passes by bringing in sheep to rotationally graze, fertilize, and weed his 1,000 acres of vineyards. He realized that their “sanitized compost,” a.k.a. poop, also reduced the carbon footprint of his entire enterprise. Specifically, it regenerated the health of the soil better than the alternatives he trucked in and manually distributed.

“Sheep produce meat, wool, they improve the soil and vines with their super high nitrogen levels and gut microbes. As my grandfather and ancestors knew, they minimize fuel loads and make land safer from fire,” he says.

At Sonoma Mountain’s certified organic, sustainable and biodynamic Benziger Family Winery, brand ambassador Chris Benziger also brings in sheep for regenerative farming practices. He learned just how much more they were capable of over time.

“We started bringing in sheep in 1996,” he says. “They are miracle workers, renewing the soil as they go. They also almost eliminate the need for herbicides, pesticides and fungicides.”

In 2017, he says he realized that the sheep’s grazing of the land and edges of the woods on their 85-acre property probably saved the vineyard.

“The Nuns fire burned right up to our property line and died out because it didn’t have the fuel load to keep going,” he says. “That was the work of the sheep.”

Sadly, Oregon is also becoming accustomed to fires. 826,217 acres were destroyed by wildfires in 2020.

Stephen Hagen, owner and farmer at Antiquum Farm in Junction City, OR, has also been turned on to the depth and breadth of ruminants’ contribution to his farm.

“I use sheep, goats and pigs in the vineyard and the surrounding forest to improve the soil health and reduce fire risk,” Hagen explains. Currently, he has 100 sheep, 30 goats and 20 pigs. Although he expects the number of goats and pigs to rise significantly in the coming years. The pigs, he admits, he mostly keeps around because they’re “cute” and also delicious.

Antiquum uses the animals to their strengths, each having a very particular role to play.

“The sheep do our detail work, and the goats focus on the brush,” he says. “Sheep eat down, goats eat up. If we release goats into a few acres of woodland, they will destroy all of the underbrush and invasive species.”

A typical goat eats between 5% to 15% of its body weight daily. Therefore, a herd of 30 can work its way through at least 175 pounds of vegetation and brush daily.

“Since bringing in the goats five years ago, I have started getting a huge amount of interest from my neighbors,” Hagen reveals. “But one thing that people don’t necessarily realize is the amount of infrastructure having goats requires. They are Houdinis when it comes to escaping. So you have to have fencing; you have to have dogs to guard them and keep them safe. You have to have an airtight plan.”

In the coming years, he plans on growing his goat herd and helping neighbors and clients with fire mitigation.

“It’s a side gig that is threatening to become a full-time operation,” he admits.

Indeed, it seems Californians writ large are open to revisiting the circular economy of meat, fiber, labor nurtured for millennia across the globe but abandoned by many powerful countries during the Industrial Revolution.

With more than 50,000 acres under vine and a production of 6 million cases annually, Jackson Family Wines is one of the biggest producers jumping into the grazing game.

“We began bringing animals into our farming practices a few years ago. We saw much they contributed to the health of the soil and vineyard,” says Shaun Kajiwara, vineyard director at Jackson Family Wines. They have 70 Dorper sheep rotationally grazing, weeding and fertilizing their North Coast vineyard properties. Kajiwara says their presence alone has drastically reduced the need for chemical or organic herbicides and fungicides. The sheep also clear out the forest edges and munch through fire loads there.

And then there are the cows.

A recent study from the University of California showed that the 1.8 million beef cattle grazing California’s rangelands consumed 11.6 billion pounds of fire fuel. Those numbers are specific to 2017 alone. The study linked grazing to a reduction in fire fuel-loads, both of which not only increase the potential of fire in the first place but, once ignited, supercharge its intensity and reach.

Kaos Sheep Outfit, a Lake County operation launched by Robert and Jamie Irwin with 50 meat and fiber ewes in 2010, now has 15,000 sheep in its care. They range across 6,500 acres in four counties working on 55 vineyards.

“For us, our priorities have always been the sheep,” says Robert. “But we love the way they care for the land as it feeds them. And of course, we appreciate their contributions with meat and fiber.”

He says he has seen a transformation in land stewardship since fires began to define life in California, around 2015.

“About 80% of our Lake County region has been affected by fires at this point,” Robert explains. “Our sheep have helped save so many houses and so much land. Fetzer was one of our first vineyard clients. We have the sheep go into the vineyard and graze around the land and woods surrounding the vineyards. The fires that came near their 960 acres of vineyards, I think, didn’t make it there at least in part because of the reduced fuel load.”

Word of Kaos’ fire-busting sheep spread quickly. In addition to the dozens of wineries his grazers protect, insurance companies and home associations have brought his team in to reduce fire risk around businesses and homes.

There’s a lot at stake—abstract concepts like wine culture and quality of life, but also cold hard cash. California’s 4,200 wineries and 5,900 grape growers deliver $57.6 billion to the state’s coffers and $114 billion to the nation’s bank.

But if gaggles of grazers can help shore up wine country’s abstract and literal treasure trove while also helping to heal the rift modernization caused in the ancient, cyclical rhythm of life and work perfected by humans and ruminants, it would behoove businesses large and small to recruit them.

Why Winemakers Are Turning to Falcons To Control Pests (and Costs)