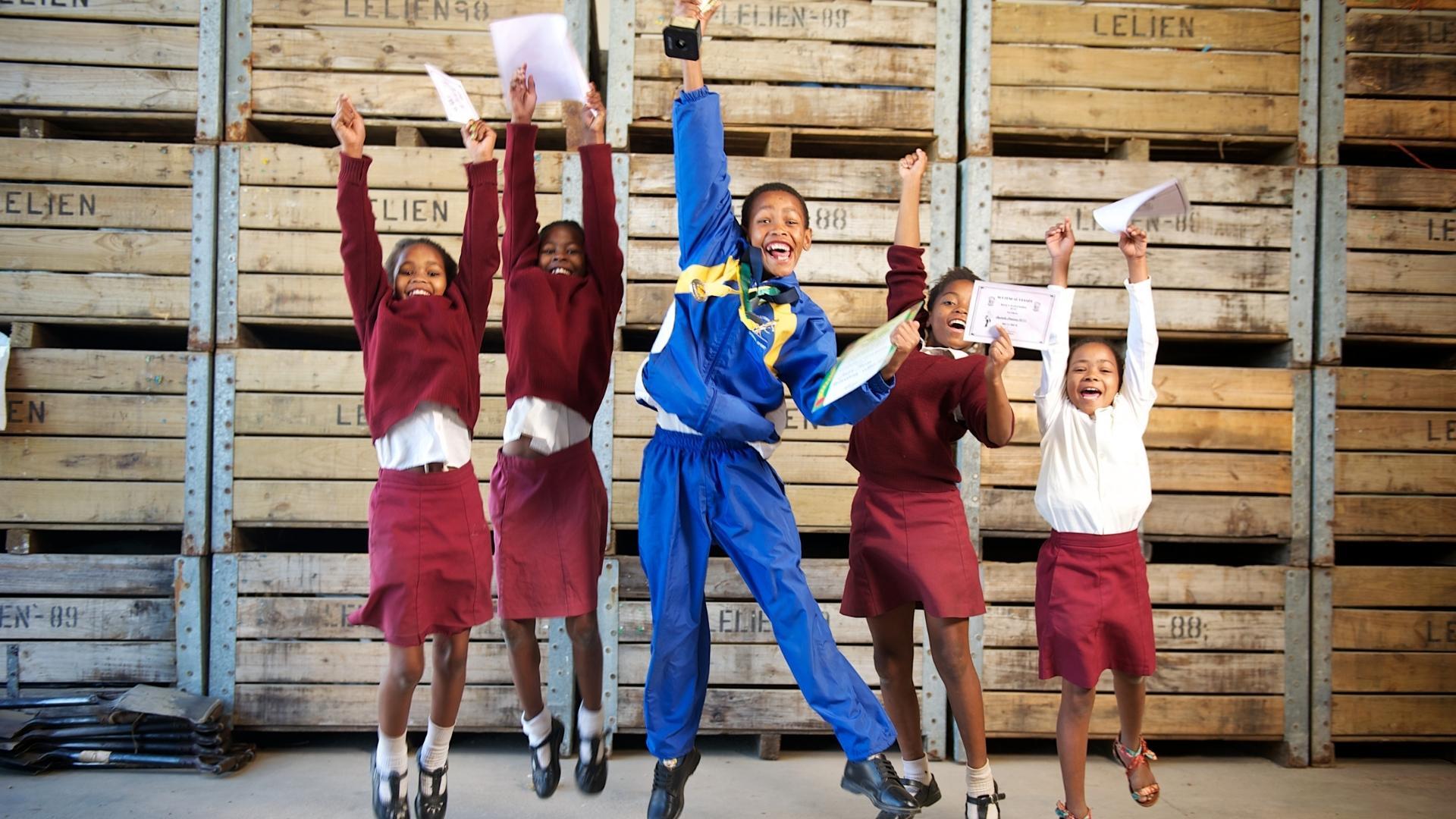 The vast majority of South Africa’s wine production happens in the Cape Winelands. About 223,660 acres of grapevines span the foothills of dramatic coastal mountains in Table Mountain National Park and continue into the river valleys. The area encompasses 30 distinct growing districts, ranging in elevation, rainfall, soil types, and weather patterns.

The incredible diversity of the terroir, the grapes, and the wine styles put it on par with some of the world’s best regions. But it’s impossible to ignore the dark legacy of South Africa’s past.

Under the rules of apartheid, nonwhites were forced to live in separate areas — this is when the country’s 500+ townships grew in population by leaps and bounds.

Residents in townships are Black or Colored (the government’s original term for mixed-race people), and the conditions look terrible from the outside, comprised primarily of a series of shoddy shelters built close together and no visible infrastructure (save public porta potties). Reports from the inside are worse.

The impact of apartheid is still prevalent, even 20 years after its official outlawing. Today, the unemployment rate among Black South Africans is around 38.6%, compared with 10% for white South Africans. For the young, it’s worse: about 64% of South Africans between the ages of 18 and 24 years are without work.

It is impossible to make this kind of innate injustice entirely right. It is even more absurd to think that one industry could right those wrongs. And yet, it feels equally intolerable not to try and to not, at the very least, set the wine industry — and, perhaps in the process, the entire country — on a path toward a more just tomorrow.

After the overturning of apartheid, the nations boycotting products from South Africa began welcoming the country’s wine again. While the industry began to blossom, it soon became clear that the success was lopsided. As a result, several organizations were launched to help level the playing field.

One of the first organizations designed to make workers’ current and future lives better was Fairtrade Africa.

“2003 was the first year the label appeared on the market,” explains Sandra Ndlovu, the director of communication for Fairtrade Africa’s branch in South Africa. “It was created to promote the rights of workers, with a portion of every sale put into a communal fund that will improve the lives of workers and give them access to healthcare, educational opportunities, and better housing.”

The money translates to about $0.04 per bottle, which goes into a legal trust managed by the workers. A separate board provides financial and investment advice.

The Pinotage Youth Development Association (PYDA) began a decade ago to help young Black South Africans create a space for themselves in the wine industry.

“We saw an immense potential in South African youth, with very little access to opportunity or even knowledge of the wine industry,” says Nikki Munro, PYDA’s program director and founder. “To realize that potential, we created vocational training programs for the next generation of wine and tourism workers.”

Thus far, almost 500 students have graduated from the program, with 90% finding employment within six months. Funds for the nonprofit come entirely from donors, with Munro saying they operate on a $550,000 annual budget.

Another initiative, the Pebbles Project, was established in 2004 to improve the lives and futures of workers’ children.

“Our primary focus is on education, health, nutrition, and community,” says co-founder Carolyn Martin, co-owner of Creation Wines in Hemel-en-Aarde. “The Pebbles Project focuses on enriching the lives of families in the agricultural communities of the Western Cape. Many children live in challenging circumstances; we focus on the entire life of the child and aim to create change.”

Last year, around $1.7 million was raised, with almost 500,000 meals cooked and distributed through their kitchens. Additionally, 113 kids ages three months to 7th grade enrolled in their education center, all of whom have access to healthcare.

One of the Pebbles Project’s most visible initiatives is the Hemel-en-Aarde Education Project, an educational and aftercare center that educates, cares for, and feeds the children of local wine workers.

“The meals, medical help, and education uplift our community,” says Elizabeth Julies, the manager of the early child community center and after-care program. “It is more than that, though. It is a community center and training facility for local teachers and students who have access to after-school classes and help if they’re struggling. My grandson is in the aftercare program, and I see what a big difference it makes for our entire family.”

Hemel-en-Aarde also provides bussing to local children for primary schools in the area and aftercare, computer literacy programs, and access to glasses and dental care.

The sheer scale of the grim lifestyle among those living in townships is distressing, to say the very least. But one thing every wine lover can do to help is support the brands who are carving out new spaces for Black South Africans.

In 2009, Adama Wines was created as a partnership between Bosman Adama Wines, Apollo Investments and the Dynasty Trust. It gave 260 long-term workers in the Bosman farming community a share of around 1,000 acres of prime vineyard land. The deal makes it the largest land reform transaction to date in the South African wine industry. Currently, Adama Wines has 30% Black women ownership, and 55% Black ownership through their Adama Employee Trust.

In 2013, the workers established the Adama Foundation Trust. Its intent is to elevate the social and economic lives of all farmworkers and the surrounding community at large. Funding comes through wine sales, which are Fairtrade certified. Thus far, about 3,500 people are benefiting from the trust. It provides housing, education, healthcare, and sports and cultural activities — including karate, chess, soccer and a choir.

In partnership with Pebbles, they have also created an early education center and aftercare, which serve 75 children each.

In 2018, Adama created a branded collection of wines run by women, HER.

“We chose the name to represent our mothers and grandmothers, with the future in mind,” says GM and winemaker Praisy Dlamini. “The line includes wines from eight women, all with plantings they own or lease in Wellington. We just started selling in the U.S. this year, and we’re getting a great response.”

Dlamini, who also happens to be a graduate of the PDYA program, says the line is producing 80,000 bottles a year, with the goal of increasing that number this year.

Stellenrust Wine Estate, established in 1928, with around 500 acres under vine, decided to give back to the workers who made it one of the country’s most successful wine brands.

“Brothers Tertius Boshoff and Kobus van der Westhuizen put 250 of their 750 acres under vine in a trust for 75 workers,” said Heinrich Stipp, sales manager at Stellenrust. “The workers were third and fourth-generation farmers. They’ve devoted most of the land to grapes, but they’ve also used the income they get from selling those grapes to Stellenrust to build their own homes, create scholarship programs for university, build a soccer field and create a computer room. Their next plan is to build a retirement home for their parents.”

Outsiders to the South African wine industry have also felt the call to create brands that will also make change. Charlie Brain and Walker Brown co-founded Lubanzi Wines in 2016 after trekking across the country as exchange students.

“They wanted to make great wine, but they also wanted to make an impact on the lives of South Africans,” says Lara Farbinger, Lubanzi’s U.S. sales manager. “They chose the Pebbles Project as their charitable partner. Together, they are funding multiple programs focused on childhood education and health.”

Fifty percent of their net profits go to Pebbles. In addition, Lubanzi’s wines are Fair Trade, Climate Neutral and they are a Certified B Corp. Currently, Lubanzi produces 25,000 cases annually, primarily for the U.S. and U.K. markets.