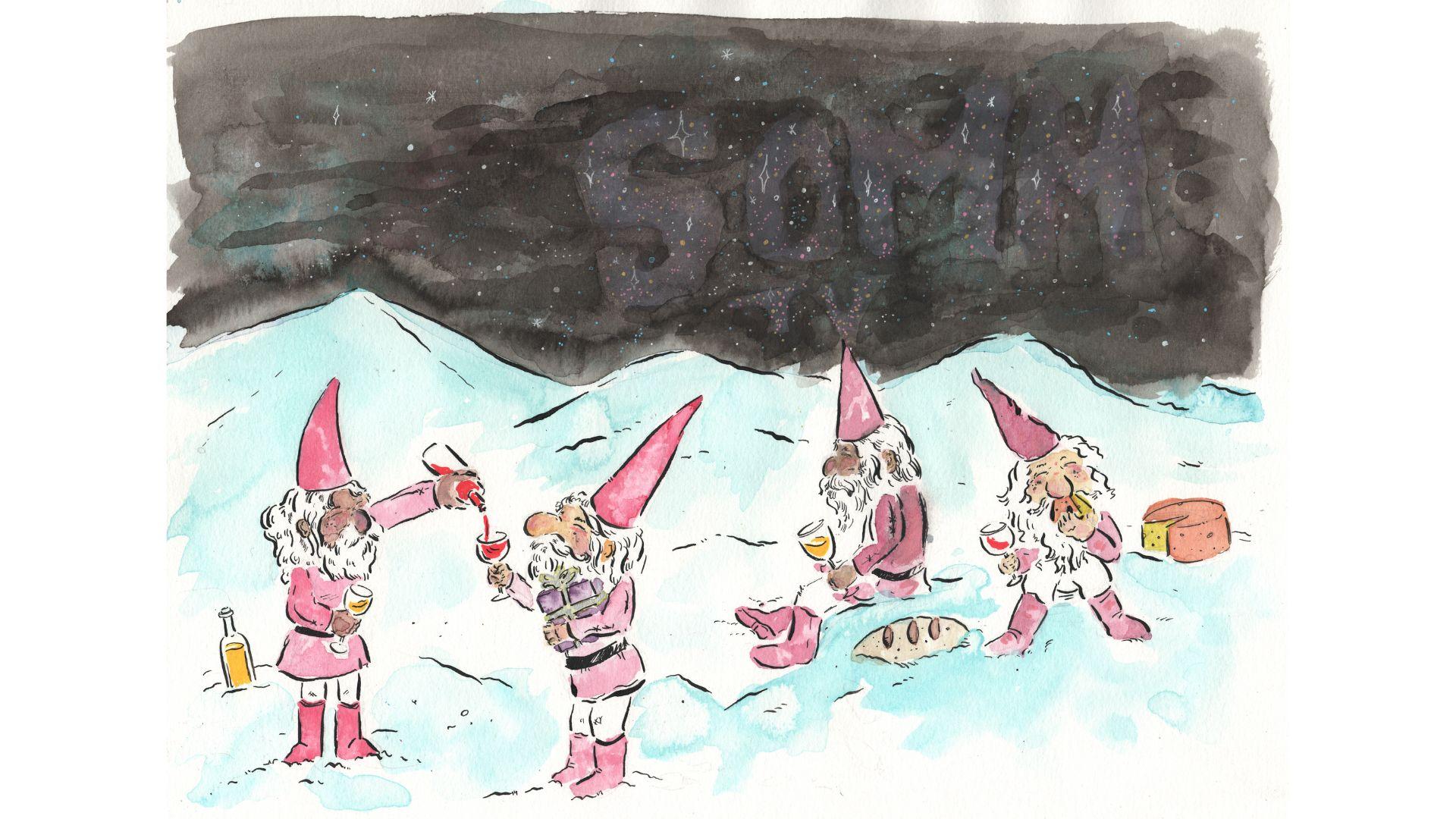 The team at SOMM TV have had some amazing adventures this year. From the top of mountains to valley floors and beyond, the views led to fantastic footage gracing our screens this year, with even more coming in 2023.

With these great experiences came some epic bottles of wine — some that had never before been outside of their original cellar — others that some may consider once-in-a-lifetime sips.

In a recent episode of the SOMM TV Podcast, SOMM TV crew Claire Coppi and John Adams joined host Jason Wise to choose their top three wines of the year through filming, podcasting, and creating content.

Although the three have distinct backgrounds in wine, each could agree on the same qualifier when choosing their favorite bottles. “I stick with experiences,” says Adams, who, in addition to being head of audio for SOMM TV, is also a winegrower and farmer for Wildsound Wine. “When you’re filming, and you’re there with the people who made the wine, everything changes,” he continues.

Claire Coppi, SOMM TV’s wine communications manager, agrees, “just because a bottle has a famous label doesn’t mean it’s going to be drinking well. For me, it’s about the experience around the wine.”

Curious what the top wine experiences of 2022 were for three people whose lives revolve around wine? Read ahead to discover their choices.

Two of the three choices for pick #3 come from a trip to Italy in mid-2022. “We got off a plane from LA, landed in Rome, and pretty much right away had to get on a plane to Naples to hike up Vesuvius,” says Jason Wise.

The hike was for Drink a Bottle on Mt. Vesuvius. “We almost threw up — between the jet lag, carrying tons of gear, and elevation — but we got to the top, and we drank Catalanesca,” he says.

This virtually extinct grape comes from the Catalon era, and Vesuvius is the only place in the world that grows it. “It’s a delicious, crispy white wine with low alcohol. It brought me back to life. It was like drinking on the edge of the earth.”

“This particular variety rocked my world,” says Adams about the Friuli grape. “It’s unique because it has this raspberry, cherry, high acid component, but with a peppery component, too.”

Claire Coppi’s #3 pick is a unique version of a more common grape, Merlot. Psâgot is an Israeli winery which will be seen in an upcoming travel episode. “This Merlot just knocked all of our socks off,” says Coppi. “I love that it’s a variety that gets crapped on sometimes, but it was beautifully balanced, lean, and precise.”

As for typicity, “it was very true to the variety, lots of pluminess. Just lovely. Perhaps not as hot as a Napa Merlot, a little lean, more elegant. More Bordeaux style, and very fresh,” she says.

All three picks for the #2 best wines come from the same experience — the FOOD & WINE Classic in Aspen. For the first time in 2022, the SOMM TV team immersed themselves in the premier culinary event, giving subscribers access to three incredible days of cooking demonstrations, wine tastings, and panel discussions by industry experts.

The weekend shoot led to 16 new episodes, including a Blind Tasting Sessions featuring Coravin inventor Greg Lambrecht and wine writer Mark Oldman. One of the bottles tasted was Thierry Allemand Cornas. “It’s one of the great northern Rhône Syrahs of the world; I’m a huge fan of Syrah,” says Adams of his pick. “It’s a perfect example of purity that’s unmatched.”

Claire Coppi’s pick happened after the cameras stopped rolling in Aspen. “After a long day, our last full day of filming, we were sitting at The Little Nell. And I see a bottle that I love on the list,” says Coppi. Sylvain Pataille Marsannay Rose ‘Fleur de Pinot’ is “so fresh but with a little grip from the tannin,” she continues. “(It’s got) lots of citrus zest, mandarin, ruby grapefruit plus bright, snappy red fruits, with a strawberry quality and cherry.”

Jason Wise’s pick came from the Drink a Bottle episode with NBA star and winemaker CJ McCollom. “The 2002 Maysara Pinot Noir blew me away, and I’m not really a big Pinot guy,” says Wise. “(Maysara) holds onto the wines; they want to make sure you drink it when it’s ready. So this incredible 20-year-old wine, even CJ, you can see him (in the episode) go, holy sh**. Willamette makes some of the best Pinot in America,” Wise proclaims.

In a shocking twist during the Top Wines of 2022 podcast episode, John Adams reveals that his top pick is from the same winery as Wise’s number two pick. In fact, it’s the exact wine, merely one vintage older. “(2001) is the very first vintage that (Maysara) produced. We had this bottle while filming (at the Willamette winery) for the upcoming SOMM 4: Cup of Salvation — it was incredible,” explains Adams. Wise chimes in, “they have a perspective on winemaking and life that is so different from other winemakers. And that’s a big part of why they’re in the film.”

Claire Coppi’s favorite wine of the year was experienced during the filming of the upcoming film, Ghosts of Spring Mountain. 1979 Spring Mountain Cabernet still had “quite a bit of that youthful fruit quality, yet it’s not that freakishly old,” she says.

Coppi got to experience the wine alongside Spring Mountain’s DTC director and resident historian, Keith Baker, while sitting among Chateau Chevalier’s 100-year-old palm trees, making the occasion one to remember.

The top pick for Jason Wise is also from California, the 1977 Chateau Montelena Chardonnay. “We have a series about the Judgement of Paris coming to SOMM TV (in 2023), and this wine is in that,” says Wise.

“Yes, the circumstances were incredible – my mother was up there with me, and she drank it with me,” he continues. “But aside from that, the biggest thing for me, when the acid and fruit are completely in balance, it brings magic. It’s one of the best Chardonnays I’ve ever had, let alone in 2022.”