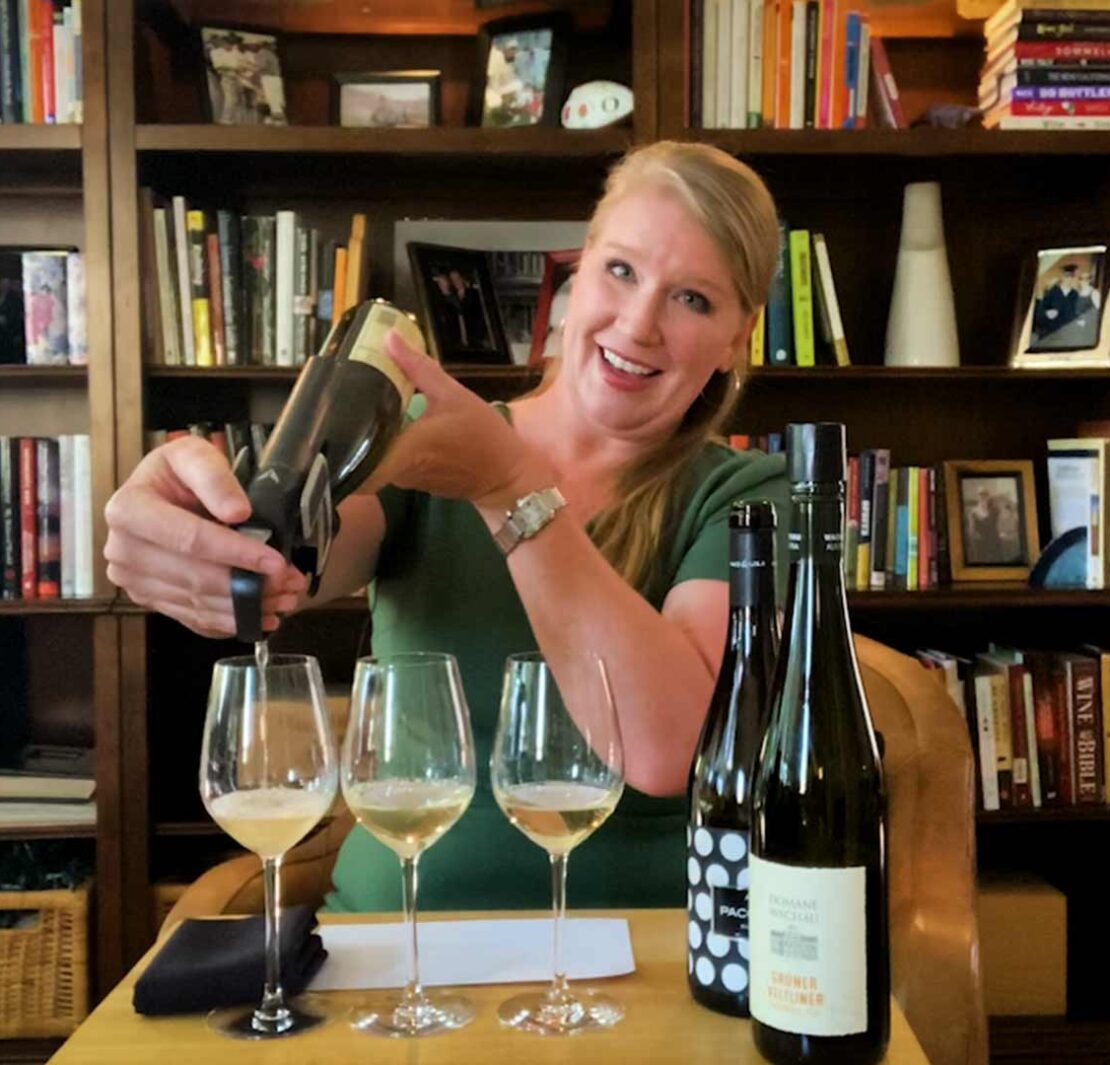 Jill Zimorski plays an enormous role in the SOMM TV cast. She hosts the Reading & Drinking Podcast, where she reviews the best and worst wine books (and everything in between). She also hosts Study Hall on SOMM TV, a series dedicated to helping people prepare for their wine certifications. As a Master Sommelier who has worked incredibly hard to earn the title, it’s a privilege to have her. Get to know Jill’s story below.

Jill Zimorski began working in hospitality at a boutique hotel with a fancy restaurant while an undergraduate at the University of Virginia. She had no experience or knowledge of food and beverage, so her duties primarily consisted of polishing glasses and cutlery. However, through that job, she was able to participate in menu and wine tastings and classes. Thus organically developing her appreciation and knowledge of food and wine.

Jill’s plan after graduating from college was to go to Law School. But after a 10-week bike ride across the country, the summer before she would have matriculated, she changed her mind.

After her trip, Jill stayed in her hometown of Charlottesville, VA, working as a server at a small French restaurant. Her wine knowledge proved helpful, and her managers took notice. They became close friends, and she found the job was fun and the lifestyle suited her. It strayed from the usual 9 to 5 but, being a night owl, it was perfect for her.

Jill soon moved to Washington DC, a bigger city with bigger restaurants and was soon hired for a management position at Charlie Palmer Steak on Capitol Hill. She befriended Nadine Brown, the restaurant’s Wine Director and the first sommelier she’d ever met. Through Nadine’s job, she was introduced to the world of wine, and they took a trip to Napa and Sonoma. After two years at Charlie Palmer Steak, Jill applied for her first dedicated Sommelier position, working for Jose Andres’ ThinkFoodGroup.

In 2006 and 2007, she took her Introductory and Certified Sommelier exams with the Court of Master Sommeliers. Following this, she took a brief break from the CMS to take the Level 3 Award and begin the Diploma with the WSET. Jill went on to take her Advanced Sommelier Exam with the CMS and passed on her first attempt in 2012.

Jill explains that “knowledge breeds confidence”. With initial certifications under her belt, she felt more comfortable and confident in her knowledge and skills, which she felt she lacked when she began her job as a sommelier.

In 2014, Jill began her journey towards the Master Sommelier Diploma. To date, only 274 people worldwide have passed the exam and achieved the title of Master Sommelier. In her first attempt, she passed both the Service and Theory portions of the exam but failed the Tasting section. The Court allows three years to pass all three parts, so she was able to take the Tasting exam in 2015 and again in 2016. Unfortunately, she was not successful. “As humans, our ability to second guess and self-doubt is pretty impressive, and it’s really hard to be in a place where not only are you skilled enough to assess the wine, but you’re confident enough to believe and choose which wine it is.” Out of all the wines in the world, the six in front of the test-taker have to be narrowed down to the region, winery, vintage and variety.

After 2016, she “Reset”, and in 2017 she proceeded to retake all three parts. She was successful again in Service and Theory, but Tasting still eluded her. In 2018, she passed the Tasting section on her fifth attempt and was officially awarded with the prestigious Master Sommelier title.

Five weeks later, her success was invalidated. A cheating scandal erupted after the 2018 exam, leaving 23 innocent, successful passers with their Master Sommelier status revoked. All candidates were given the option to retake the exam in 2019, despite having already been successful.

Jill retook the Tasting portion in 2019 without telling any friends or family. Having her exam results invalidated and her certification revoked was one of the most demoralizing things she’d ever encountered. Without staying for the ceremony, Jill simply took the test and went back to Chicago, receiving a phone call notifying her of her success the following day. To her, it wasn’t an achievement as she had already passed the exams and had already become a Master Sommelier the previous year. This was just a formality to have her certification rightfully returned and recognized.

The Introduction to SOMM TV

Jill met Emily Wines after attempting the Tasting portion of the exam in 2017. She felt she needed to change the way she was practising for and approaching the exam. After a ‘cold call’ style message on Instagram from Jill, Emily was happy to help. The two met at restaurants and ordered half glasses of wine for Jill to fine-tune her process, which Emily critiqued.

“I think the wines in the exam are fair. You have to taste good wines to get good at identifying good wines.” Purchasing a Coravin was part of her new tasting practice. This allowed her to open quality bottles and revisit them days/weeks/months later. A much better alternative to finishing the bottle within the week or ending up pouring wine down the drain.

For Sauvignon Blanc Day in 2020, Emily was collaborating with SOMM TV. Jill was invited and introduced to Jason Wise, thus beginning her relationship with SOMM TV.

Study Hall on SOMM TV came about during the pandemic when Jill was furloughed from work for five months. Looking for ways to be productive and to stay engaged, she wanted to pass on her knowledge. All exams had been put on hold, so she wanted to help those stuck in limbo waiting for their exam. It only made sense to pay it forward, and so Study Hall was born.

After checking with the Education Director of the Court, she was able to plan out her ‘lessons’ for each episode. She gives out her study processes and tips, but no answers. She ensures no one’s experience will be jeopardized – as hers had been.

The Reading & Drinking Podcast came about similarly. With plenty of time on her hands to read, it made sense to be a resource for those looking for wine books to study or to simply enjoy. Ironically, after reading a terrible wine book was when the idea of the podcast came to her. To make sure that no one would take the erroneous information in the book as fact, she thought a book review podcast would be the perfect plan. (You’ll know which book she’s talking about if you’ve listened to Season 1). Reading & Drinking is a favorite for Jill as she’s an avid reader who loves books about wine, “as long as people love it, as long as it stays fresh and interesting and relevant, I’m up for it.”

Despite the unexpected twist in her career to talking about wine exams on camera and explaining the pros and cons of books behind a microphone, it’s been a very appropriate transition for Jill. As someone who isn’t nervous talking to crowds or cameras, she’s felt at ease from day 1.

Continuing the appreciation of mentoring and passing on what she’s learnt, Jill teaches WSET courses, currently in a virtual capacity. Teaching keeps her brain sharp and keeps her involved with those going through the certification so that she can be of support. “I always want to keep learning and to be able to use my knowledge and experience to help other people and keep growing.”

Between Strategic Group, her WSET courses and SOMM TV, it makes for a busy lifestyle. But after such a quiet year, Jill maintains it’s been a good change for her, and it’s a joy to be busy.

One day she would love to work for herself, and potentially something that includes education would be great. But she’s still unsure at this stage what lies ahead.

The wine world is the place for her, and a path will become clear soon enough.

“I’ve managed to combine something that I personally really love, a passion for wine and learning about wine, and travelling, with my career.”