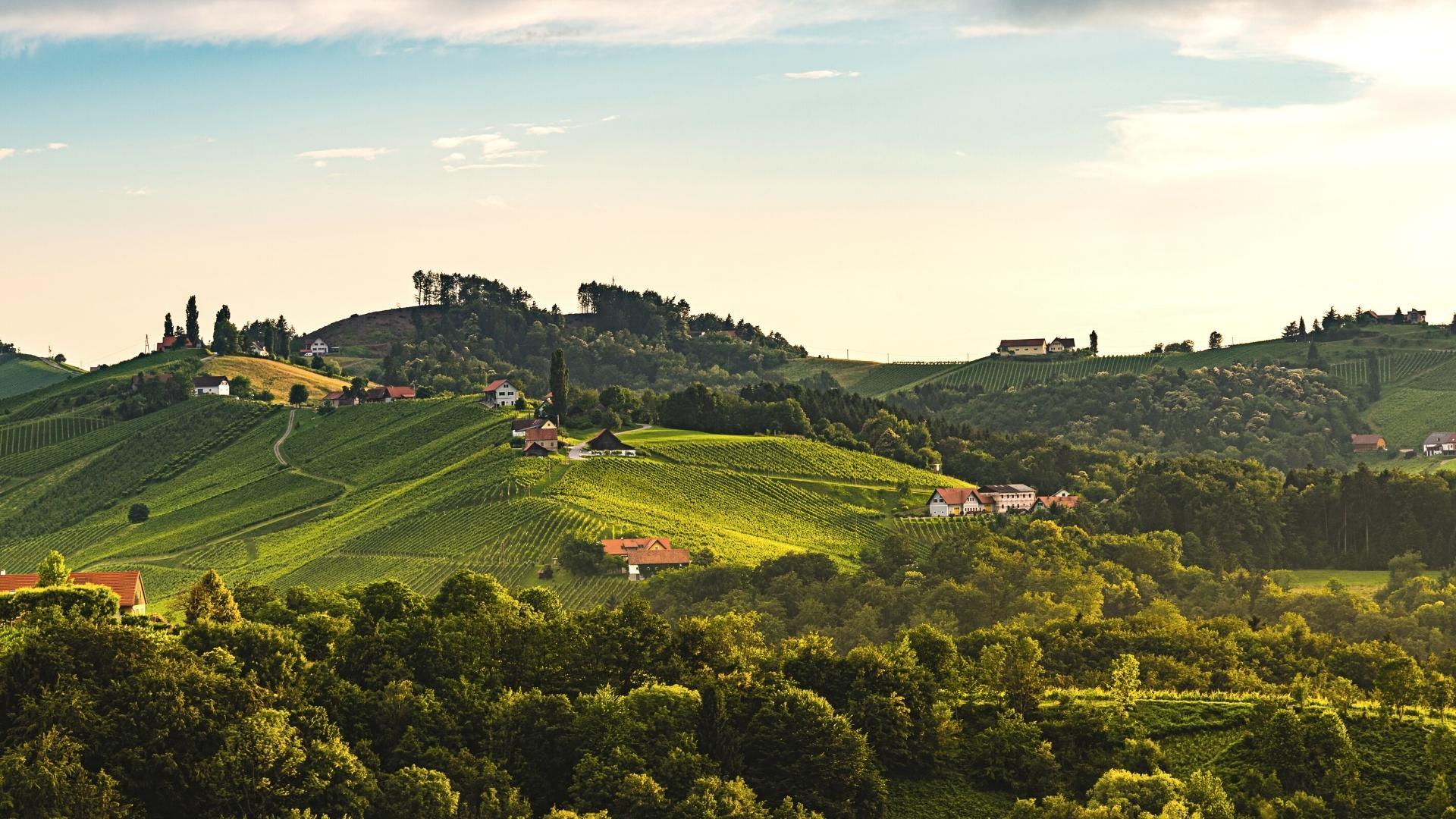 Compared to other major winemaking regions, Austria sees a small amount of shelf space in stores and little mention in sommelier exams. In 2021, the country recorded 44,913 hectares under vine, twenty times less than France. However, Austrian winemakers utilize their strengths to create quality wines and garner international acclaim. Wine has been a part of the country’s culture for centuries. Part of Austria’s wine identity includes respect for nature, environmental protection, and biodiversity.

Within the wine community, most are familiar with Grüner Veltliner of Wachau or Riesling of Kamptal. But 16 other official Austrian DACs (Districtus Austriae Controllatus) are making exceptional wines, most of them overlooked and underrated.

The Rise of Sauvignon Blanc in Styria

Styria is the southernmost wine-producing region in Austria. It includes the city of Graz and stretches out towards the border with Slovenia. In 2018, Vulkanland Steiermark, Südsteiermark and Weststeiermark were elevated to DAC status. These three appellations, in particular, share hilly terrain and a cool climate, allowing for Sauvignon Blanc to play a starring role.

Between 2009 and 2021, the region’s plantings of Sauvignon Blanc grew 77%. This increase saw the grape take the lead in white grape plantings, accounting for 25% of all white grape varieties. Previously, Welschriesling held the top spot but currently only accounts for 15%.

Steirische Terroir & Klassik Weingüter (STK) is the driving force behind the increase of Sauvignon Blanc popularity. The association, which currently comprises twelve wineries, began in 1993 and guarantees quality climatic characteristics and terroir expressions.

Weingut Tement is one of the leading producers within the STK. Year after year, its wines receive highest praise from international wine critics. The latest vintage of Ried Zieregg Sauvignon Blanc received a stunning 97 points by James Suckling.

“We will focus on producing the best grapes from healthy vineyards,” says Armin Tement, vigneron at Weingut Tement. “In the cellar, we will influence style less and less.”

In eastern Austria, where indigenous red varieties like Zweigelt and Blaufränkisch are prominent, earth-friendly winemaking is seeing immense growth.

Andreas Gsellmann is a founding member of Pannobile, a movement of nine members from the municipality of Gols in the Burgenland winegrowing region of Neusiedlersee DAC. Since 2007, Pannobile has been focusing on growing its grapes biodynamically.

“Some Austrian wine consumers are still very conservative classic wine drinkers,” says Gsellmann. “From my point of view, with the generational change of wine drinkers, the trend towards natural (sustainable/holistic) wine will inevitably prevail.”

Organic and biodynamic farming reflects a general trend across the entire country. Austrian Wine reports one in five vineyards farm biodynamically. Numbers collected by Demeter and respekt-BIODYN cite a near-doubling in biodynamic vineyards, from 8.3% in 2010 to 15.9% in 2020.

A Growing Trend Toward Sweet Wines

Another heavy focus in the Neusiedlersee DAC is sweet wines, with protected origin granted in 2020.

Franz Schneider, owner and winemaker at Artisan Wines, released its first-ever sweet wine last year and will continue with a 2021 vintage Spätlese Bouvier.

“We’re seeing a trend to sweet wines becoming fashionable again,” says Schneider. “A long time ago, sweet wines were only sold by a few outstanding producers (like Kracher and Tschida). But now with the implementation of Neusiedlersee DAC on sweet wines, we will see more international demand.”

Schneider further states that his focus at Artisan Wines, outside of sweet wine production, will continue to be Neusiedlersee DAC Reserve, made from 100% Zweigelt. The red grape variety was first invented in 1922 as a crossing between Sankt Laurent and Blaufränkisch. Today, it accounts for almost 14% of the total vineyard area in Austria.

“Zweigelt is underrated, but it’s very versatile. Styles range from easy-drinking summer wines, serve chilled, to age-worthy with bold character. Many people believe that Zweigelt wines don’t last, and I am happy to prove them wrong,” says Schneider.