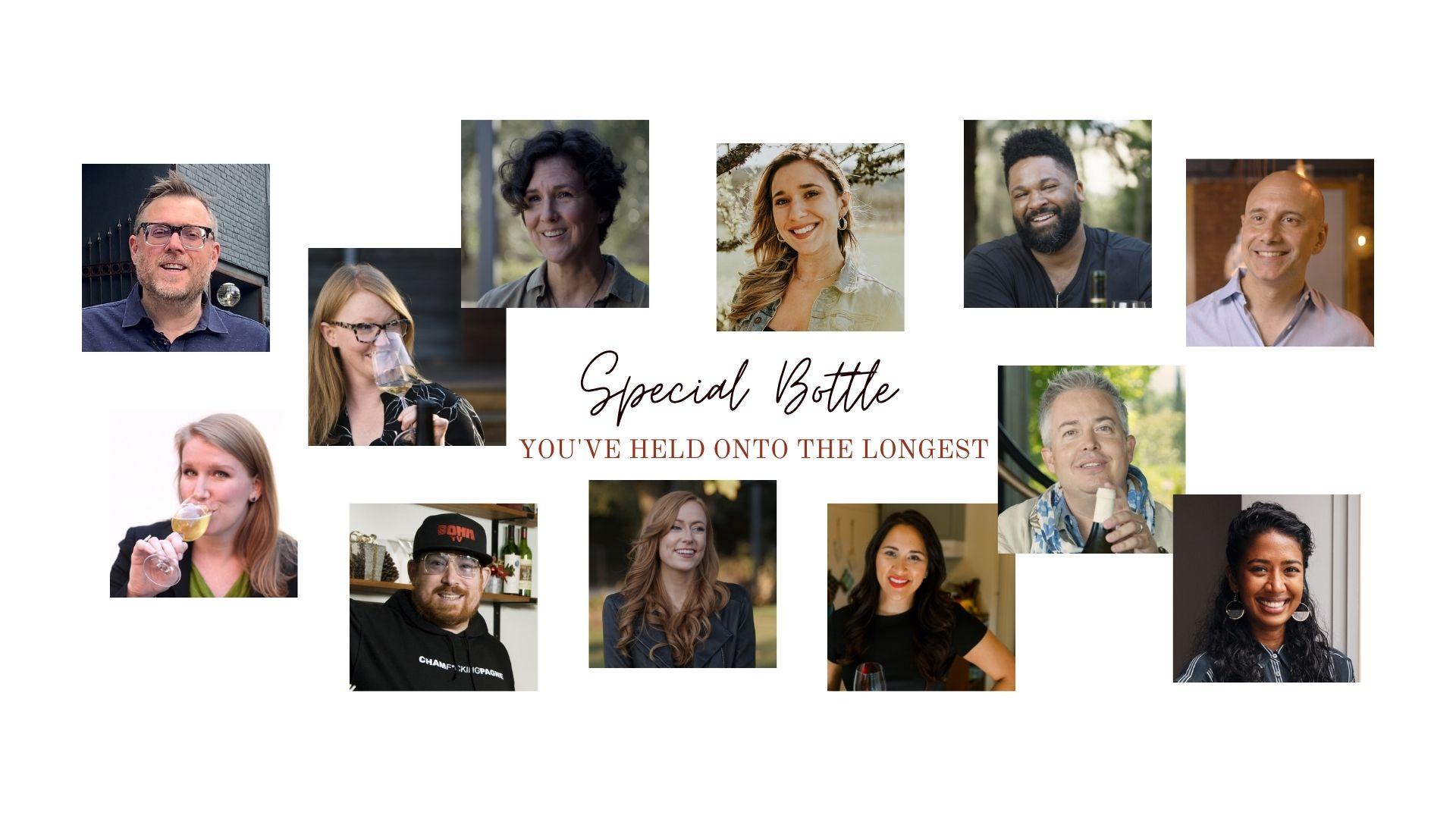 It’s common for those that work in the wine industry to have a separation between wine collections. The work wine collection might be bottles accumulated from previous employers. Perhaps some lab samples that never came to fruition or extra stock from a tasting or festival. While perusing, we think fondly back to coworkers and experiences that led to having these bottles on the shelf. On the other hand, the personal wine collection is more sentimental. It includes bottles given as gifts by the people who love us most or purchased during a life-changing trip. Both fill the shelves, but one undoubtedly holds more space in our hearts.

Among the personal wine collection is one bottle that’s been there the longest. This bottle has not only a story for being there but also a reason for not having been opened yet.

We went to the SOMM TV cast to ask what that particular bottle is for them, where they got it, and what special occasion they’re waiting for to open it.

What bottle has been in your cellar the longest?

2005 Beaulieu Vineyard Georges de Latour Private Reserve. I wasn’t even 21 when I got it. My best friend had turned 21 and knew I had become passionate about wine. I told her I’d read that 2005 was a great vintage per Ed McCarthy and Mary Ewing-Mulligan in Wine for Dummies, my first wine book. We’re bicoastal besties, and there’s still time for the wine to age, so we’ll have to open it together when there’s something big to celebrate.—Maryam Ahmed

The wine I’ve held onto the longest of my entire collection is the initial vintage of my small wine label, AM/FM, that I made with Keith Saarloos of Saarloos & Sons in Ballard Canyon in Santa Barbara County. It’s a 2007 Syrah from the Windmill Ranch Vineyard, and I will likely open it once it turns 20. Only five more years to go! All of the other aged wines I have in my collection I purchased from previous owners, and I tend not to hold onto things too long.—Matthew Kaner

I have a 2013 Marcel Deiss Schoenenberg that I purchased several years ago while visiting Alsace. I was told by Marie-Hélène Cristofaro, the manager of the Domaine and Jean-Michel Deiss’s wife, to not open it for at least twenty years or it would be “infanticide,” I agree! So I’m letting that bottle sit, lest I be labelled a baby killer!—Claire Coppi

1973 Penfolds Grange. Having had the vintage several times, maybe I’ll open this particular bottle with someone born in ’73. —DLynn Proctor

A bottle of 1996 Stag’s Leap Wine Cellars Fay Cabernet Sauvignon signed by Nathan Fay. I had the pleasure of tasting the new release of his eponymous wine each and every year until his passing at the age of 86. And he always wanted to taste in this order: Cask 23, S.L.V., and Fay. The reverse of how we did it in the tasting room at Stag’s Leap. But this was the way for Nate. After all three, he’d point to the Cask 23 and S.L.V. and quip, “they’re good, but they’re no Fay.”

Twenty years later, I still think about our chats over three glasses of Cab in the bottling room at Stag’s (the tasting room was “too formal”, he would say). We’d talk about farming, grape sampling, winemaking in the basement, and the days when everyone told him that the area he lived in (now Stags Leap District) was just “too damn cold for Cab.” He was then – and remains today – an inspiration for me. You can see shades of his lessons taught in the Pilcrow Ghost Block Cab that I make with my wife. Vines grow without hedging, without anxiety, but with a sense of urgency, just the way Nate did his. I’ll open it someday. On a random day, with just Sara and some pizza. Yeah, that’s how I’ll do it. No pomp, no circumstance, just us, that bottle, and memories of a legend. —Jonah Beer

My now-grown-up kid has a birthday coming up. When they were little, I bought a Vieux Telegraph Châteauneuf-du-Pape from their birth year, 1999. Twenty-three years would be a good time to open that wine, so I suspect this will be the year.—Elaine Chukan Brown