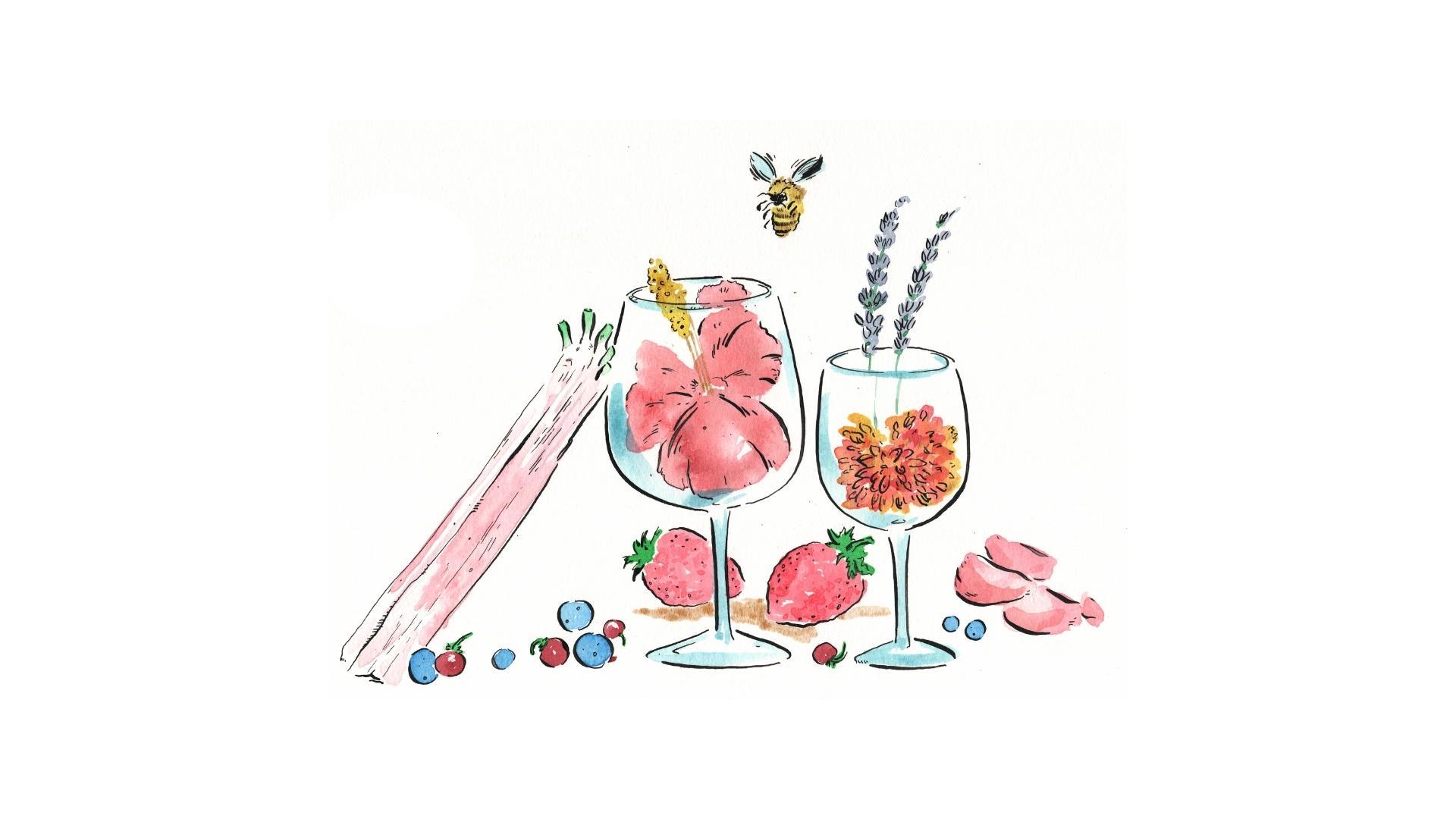 At the risk of sounding like Jack Handey, what is wine?

Many would generally agree that wine is a varied, complex beverage. It’s a cultural and historical ambassador of different times and places, arriving in various hues, textures, and forms.

But does it have to come from grapes? Until very recently, most would say “yes.” (Can you picture Robert Parker allowing a blueberry wine to pass his lips, never mind giving it 100 points?) Increasingly though, consumers, producers and the wine industry writ large are making room in the cellar for wines made from peaches, cherries, and pomegranates. Or rather, pretty much any crop they can ferment and age like they would grapes.

Before the modern period—indeed, for most of the thousands of years that humans have been making wine—the production of non-grape wine was standard. The first confirmed wine, a 9,000-year-old rice and honey wine made in central China, is a palimpsest of wines produced today by curious and thirsty people fermenting beverages from local ingredients and yeast, aging them in various vessels then releasing them to fellow enthusiasts.

“Wine has never just been about grapes,” insists Brian McClintic, founder of Viticole Wine, a subscription service to wine made from grapes and other delicious comestibles. “It can be about all kinds of fruits and herbs. Look, it has been a mindset shift for me too. As a master somm, I assumed anything that wasn’t made with 100% grapes was inherently lower quality. But then I was introduced to Nate [Ready]’s Hiyu Wine and La Garagista, both of which are made with multiple fruits, sometimes herbs, and I saw for myself how complex, serious, and terroir-driven they were, and my entire focus shifted.”

McClintic launched Viticole in 2016 as a fairly traditional wine subscription service, emphasizing natural and organic wines. In 2019, he began introducing cider and multi-fruit wine. The shift was not a home run.

“We lost a lot of subscriptions,” McClintic admits. “But it was worth it to me, and now we’re back where we should be. For me, promoting non-grape wine isn’t just about giving this category its due. It’s much larger. Climate change is here because our relationship with nature is broken. We need to do everything we can to incentivize biodiversity. If I can do that by bringing polyculture and responsible farming to more people’s glasses, then great.”

“I actually tried to get an internship at classic wineries in Napa in the 1990s when I was in college. But it didn’t happen, so I pursued my interests in biology and herbalism instead,” Nitoto says. “When I was studying, I came across this alternative but incredibly rich history of winemaking that didn’t necessarily revolve around grapes. I became so curious that I tried making my own batch of lavender wine.”

Nitoto quickly discovered that the process of making flower wine is slightly different from that of making grape wine. She starts with dried or fresh flowers, crushes them and lets them sit in water. Fermentation begins after adding a sugar source and yeast. Her wines then age in stainless steel.

But she was shocked by the results and the similarities flower wine has with grape wine in the glass.

The initial experimentations and enthusiastic reviews from friends inspired her to try her hand at more, and Free Range Flower Winery was born. Still and sparkling wines made from rose petals, rose and hibiscus, lavender, marigold and (soon) feijoa are all available online and in select retailers in California, where she’s based.

Terroir has always been paramount to winemaking. For many wine producers in cold and northerly climes who want to use the fruit of their land, grapes simply aren’t an option.

“It was a complicated decision for us because we both love dry wines from Bordeaux and Burgundy,” says Bob Manley, co-owner of Hermit Woods in Meredith, N.H., with Ken Hardcastle and Chuck Lawrence. “But we also commit to growing everything organically. And even after planting cold-hardy hybrids, we found it was tough to grow them without chemicals.”

“If you could ferment it, we’d try it,” Manley admits of their initial experiments a decade ago. “We were determined to build terroir-driven wines from local and regional fruits.”

They found that they could extract tannins from wild blueberries because they had a higher skin-to-juice ratio; they keep the juice on the kinds for a longer time, building complexity. For their strawberry and rhubarb wine, they use stems and leaves to add tannins and structure. They’ll add the inedible local autumn berry or staghorn sumac to ferments for additional complexity. They make wine from all manners of locally grown or foraged comestibles, including honey, cranberries, apples, blueberries, blackberries, raspberries, elderberries, autumn berries and more.

“After a decade of tinkering, we’ve found that we can create light-bodied to medium multi-fruit wines that are dry, food-friendly and terroir-driven,” Manley says. “We age some in stainless steel, and others get extra time in oak, for three months to three years.”

Some, like the Wild Blue, are for early consumption, he explains. But others, like the Northern Berry Red or Winnipesauke Rosé, are cellar-worthy.

There’s clearly a market for it. Since launching, Hermit Woods has grown by leaps and bounds. It ships its 6,000 or so cases of New Hampshire wine to fans across the country.

In Portland, Maine, Amanda O’Brien launched eighteen twenty wines after sampling a locally brewed rhubarb wine and being gobsmacked by how much she genuinely enjoyed it. Seeing an opportunity as a professional marketer and Maine obsessive, she jumped at the chance to broaden the notion of what great wine could be.

“I wish more people cared about how their wine is made and where it’s from,” O’Brien says, explaining that Maine wine, in her mind, should be made from Maine-grown fruit. “Our primary wine is Victoria, made with just Maine-grown rhubarb. Rhubarb is the backbone of our wines because it’s bright and tart and imparts notes of grapefruit, lime zest and green apple.”

eighteen twenty is a relatively new and small operation (producing about 300 cases a year). But O’Brien is serious about drilling down and proving how distinct and diverse rhubarb wine can be.

“We are hoping to study the rhubarb juice we source from different farms. We have had discussions with QC2 lab at the University of Maine to work with us,” she says. “I’d love to highlight different regions of the state in bottlings, but we’re not quite there yet.”

The multi-fruit wine space is evolving quickly, with traditional producers entering the fruit-filled fray, sometimes despite themselves.

“I did a complete 180 on fruit wine,” says Garrett Portra, co-owner and winemaker at Carlson Vineyards in Palisades, CO. “Never in a million years did I think I’d enjoy one. But now I’m not only producing several, but I’m also working on developing several more.”

For Portra, who also produces wines from locally grown Vitis vinifera and cold-hardy hybrids, it was about thinking like a farmer.

“Colorado grows some of the best peaches, cherries and plums in the country, and we also have an excess of certain grapes,” he says. “I have been experimenting with multi-fruit wines, and we’re finding that we can create balanced, terroir-driven wines that are very particular to this region. I also enjoy the challenge of creating structured, food-friendly wines from multiple fruits.”

“The plum and Malbec wine blew me away. There is just so much structure there,” he says.

Jamie Benziger, winemaker for Imagery Estate Winery in Glen Ellen, CA, would probably never have made blueberry wine if it hadn’t been for her father.

“When I was a senior in high school, my dad’s heart was scanned, and they discovered some shadowing,” Benziger recalls. “My grandfather died of a heart attack at 65, so it was a wake-up call.”

Blueberries, known for their seemingly magical heart-boosting medicinal powers, became a mainstay in the Benziger household. One thing led to another, and soon the Benzigers were co-fermenting blueberries from a friend’s farm down the street and Syrah from their estate. The introduction of their first batch was more than a decade ago.

“It is one of the more interesting wine projects I work on,” Benziger, who took over the winemaking duties at her family winery in 2017, admits. “This year, we’re actually releasing two batches. One will be a Syrah with one clone from our friend’s farm. The other will be a Malbec with another clone.”

Aged for ten months in French Oak (25% new), then 6 to 8 months in bottle, Imagery only produces about 200 cases of Code Blue.

“It’s a cult wine,” Benziger says. “We don’t advertise it. We don’t even sell it online. The people who know, know. And they love it.”

What is wine? The definition is now broad enough that even bastions and protectors of classic wine culture, like the Wine Spectator, are embracing wines made from lavender, marigolds, roses and hibiscus.