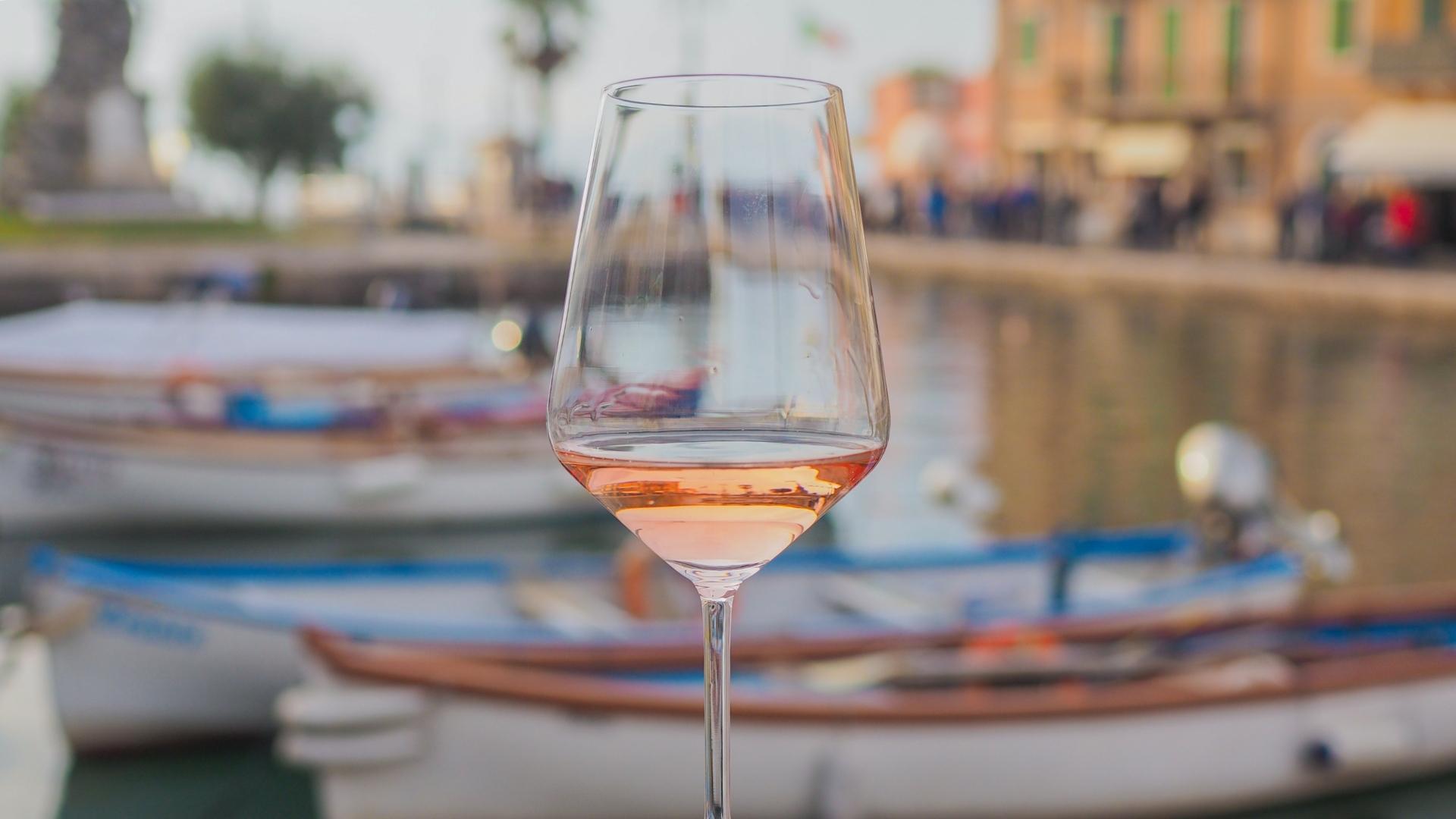 When we think of rosé wines, Provence, France comes to mind, first and foremost. But Italy is starting to catch up. Long underrated, Italy is now the third largest producer of rosé wine in Europe after France and Spain. As Italian rosé builds in popularity, one style, in particular, is finding its identity: Chiaretto di Bardolino.

Chiaretto di Bardolino comes from the eastern shores of Lake Garda in northern Italy’s Veneto region. “Chiaro”, meaning “light in color”, translates from Roman Latin “vinum clarum” and the medieval “clareteum”. Chiaretto was the first wine made in the Lago di Garda region by the Romans, who initially introduced the press. The steps were simple: picking + pressing (without maceration) = pink wine.

While Chiaretto has been produced in the region for over 2,000 years, it was not a wine held in high regard until recently. The high-quality wines of neighboring Valpolicella were partly to blame. The two regions use the same grapes, Corvina and Rondinella, but Valpolicella makes red wine, deep in color, while Bardolino’s red wine is light in color and body. To appease the masses, Bardolino producers tried to make their red wines more like Valpolicella by pressing grapes made into Chiaretto wine and adding the skins to intensify the color. Unfortunately, this destroyed the quality and reputation of both categories of wine from Bardolino, red and rosé.

Angelo Peretti, head of communication and strategies for the Consorzio di Tutela Chiaretto e Bardolino, believes that rosé must have a strong identity. “Pink is a different color from white or red, but it is also a different idea of wine. When you make a pink wine, you don’t have to make a lighter red or a bolder white. It is different from both.”

Peretti first joined the Consorzio in 2009, suggesting producers improve the Chiaretto quality by pressing the grapes for rosé wine, but they were resistant. That was until 2014.

The Evolution of Chiaretto di Bardolino

Northern Italy was pummeled with four months of rain in 2014. The vintage for red wine was a loss. But Peretti saw an opportunity, suggesting producers use the press to make rosé Chiaretto. “They had nothing to lose. So, 85% agreed to start making Chiaretto from pressed grapes, not macerated grapes,” says Peretti.

This new attempt at using the ancient method was a success. According to the Consorzio, nearly all (98%) Chiaretto producers currently use a press. Only two producers continue to use the Saignée method, which includes three to four hours of maceration.

With the improvement of Chiaretto, the quality of red wines from Bardolino also grew. Producers came to terms that they had to tend the grapes differently. The Corvina grape has thin skins and ripens quickly in pockets with high exposure to the sun, therefore losing acidity. As a solution, producers isolated vines at lower elevations for Chiaretto, which are best for freshness and acidity. They are harvested up to 15 days earlier than grapes for red wines, which generally grow on higher slopes with greater exposure to the sun.

Glaciers shaped the Garda basin thousands of years ago. As the glaciers pushed through the region, they left behind a vast number of materials, including gravel, pebbles, boulders, and more. There are as many as 66 soil types, offering lots of variabilities. “The freshness and bursts of minerality of Chiaretto originate in the soil,” explains Peretti.

The diverse soils from the glaciers and the Mediterranean-esque climate compose the region’s terroir, giving Chiaretto and Bardolino wines a strong identity.

“What I expect from both Chiaretto and Bardolino is very drinkable, light wine,” says Peretti. “In the case of Chiaretto, I am searching for salinity and a serious rosé that can be enjoyed young or can age. For Bardolino, I want the best expression of the Corvina grape, which can produce an elegant, light red wine, like Gamay and Pinot Noir.”

The Future of Chiaretto di Bardolino

When Peretti first suggested that producers change the way they make Chiaretto, “people thought I was crazy.” But in the past five years, Chiaretto di Bardolino has seen exponential growth. In 2014, no wineries were exporting their Chiaretto wines. Today, the Consorzio states that 20% of its members ship to the United States, Canada, and Scandinavia.

“People underestimated us because we made light wines when people wanted bolder wines. It was a problem in the past, but now it is our chance for the future,” Peretti concludes. “By making our traditional wines, we are becoming modern.” And as a result, Chiaretto di Bardolino has found its identity.