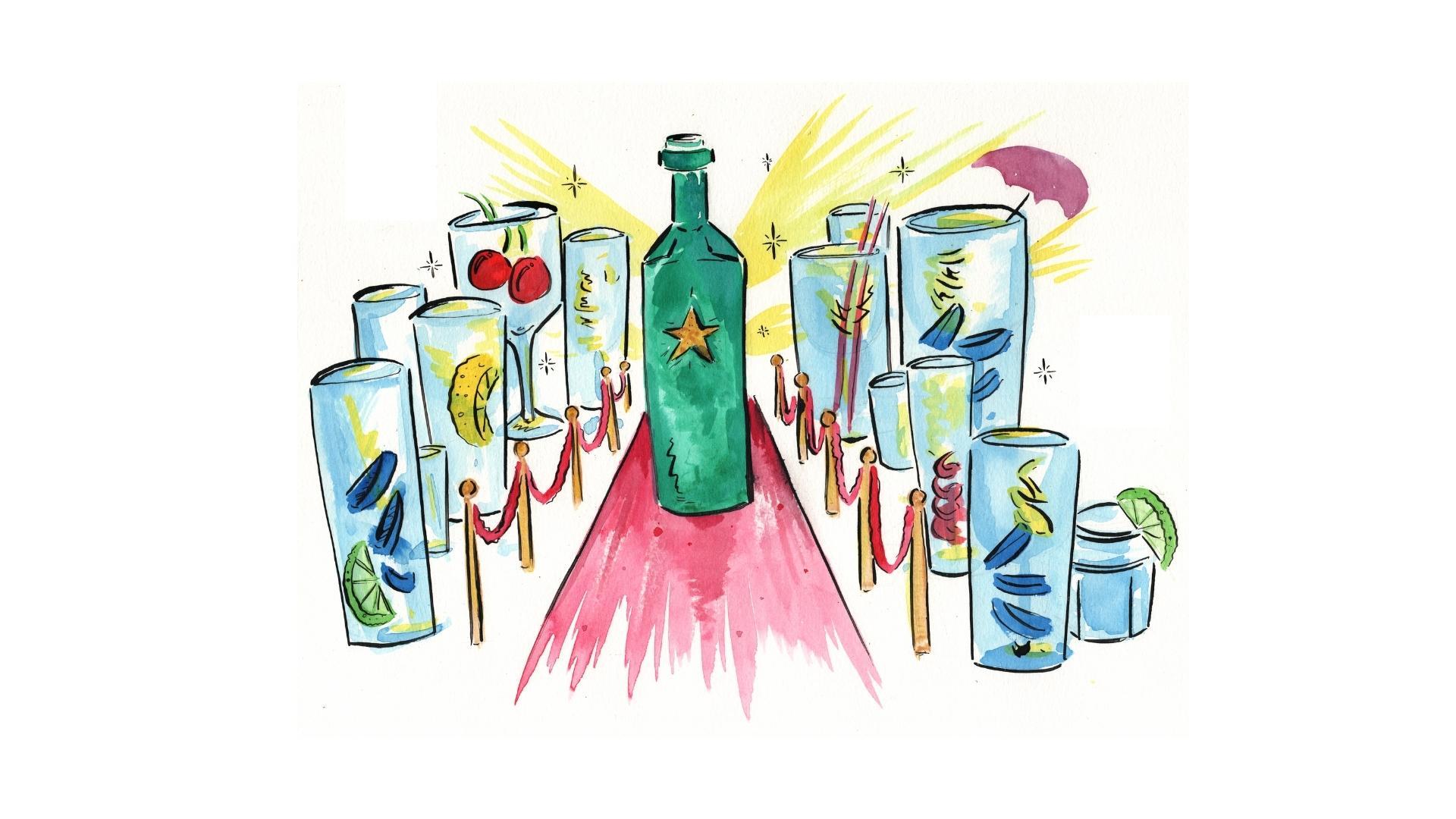 It’s hard to pinpoint the first celebrity-shilled bottle of booze. Perhaps it’s Courvorsier – it claims to be Napoleon’s favorite. Or, Ciroc — in 2007, Diddy joined the company as the chief marketing officer in a profit-sharing agreement, turning the vodka brand into a full-blown lifestyle. Or maybe it was 2013, when George Clooney and Rande Gerber rode motorcycles through Mexico, selling Casamigos Tequila.

In 2018, there were less than 40 celebrity-affiliated brands. Now there are over 350 different bottles from famous faces. “The rise of celebrity spirits is highly due to big conglomerates witnessing other brands gaining success through leveraging celebrity’s popularity to sell their products,” says Trevor Leppek, owner of Reno-based Pignic Pub + Patio. There’s even an app — GrapeStars — that catalogs them, allowing you to scroll through celebrities and purchase accordingly.

The numbers are certainly appealing. Casamigos was purchased from Gerber and Clooney in 2017 for the price of $700 million. A further $300 million was allotted based on brand performance. Forbes reported that Jay-Z has earned $100 million from his venture with D’Usse Cognac. Davos Brands sold Aviation Gin to Diageo in 2020 for $610 million.

Two years ago, GrapeStars raised over $5 million (including big names like Kevin O’Leary) to launch. Projections indicate the app could bring in $100 million in earnings within the next 5 years.

But can every celebrity co-sign bring in these numbers? What about Bill Murray’s vodka? Rita Ora’s tequila? Jason Derulo’s rice ‘non-vodka’?

It’s true some collaborations feel forced. A whiskey aged to the sounds of As the Bell Tolls certainly doesn’t feel like Metallica’s passion project (especially as frontman James Hetfield is a recovering alcoholic). (That said, they did tap the master distiller from Stranahans to produce some great liquid. But why not just drink Stranahan’s?)

Does the Breaking Bad cast need a mezcal? Don’t get me started on Elon Musk’s Tesla tequila. “Most of the brands are more so endorsements, wherein they give celebrities a small stake in the brand so they can be classified as ‘owners,’” Leppek explains. Essentially, it’s passing hype.

Some brands don’t even have a real celebrity backing. Papa’s Pilar rum is merely an ode to Ernest Hemingway, while Jack Daniel’s Sinatra Select is a hat tip to one of their more famous drinkers. (Though Sintra was a serious Jack fan — he would swirl  the Tennessee whiskey on stage and was buried with a bottle in his suit pocket. The brand never paid a cent towards his spokesmanship.)

Celebrities will weave tales of them traveling to Mexico or bourbon country, riding on horseback through agave fields or walking through rickhouses selecting barrels. So how do you vet which collaborations are shameless and which are soulful, especially through the marketing magic?

An excellent place to start is to pinpoint the producer. Find out if it’s an established distillery or producer or if the spirit is one of dozens coming out of a large plant. Learn if the brand s local workers and their heritage. And determine if the connection between celebrity and product seems authentic.

The best brands seem to follow a formula: find a reputable distiller, let them work their magic, and lend your star power to the selling. Matthew McConaughey followed a similar route: tapping an expert, in this case, Wild Turkey’s Master Distiller Eddie Russell, and acting as his shadow to make Longbranch whiskey.

While Reynolds’ face is on every Aviation Gin billboard, the brand initially began by a couple of American mixologists eager to bring gin culture to the States. Reynolds loved the product and purchased a major stake in the brand. He leaves the process to the experts, instead using his star power to sell bottles. (Remember that Peloton commercial?)

There’s Singani, a Bolivian brandy category that Steven Soderbergh stumbled upon while shooting Che in 2007. He launched his iteration — Singani 63 – and is still quite obsessive about the brand, preaching the mixology merits of white brandy and taking to Instagram to share his fervor for the spirit. He’s well versed on things like bouquet and flavor and even petitioned the US Alcohol and Tobacco Tax and Trade Bureau to recognize Singani as its own category.

The thing with celebrity spirits is like any product with a star’s name, people buy them. It’s a way to show support to your favorite star and a chance to buy into their lavish lifestyle. Diddy once reflected in an interview that Ciroc Seltzer was “aspirational” — an extension of his high-flying, big-spending lifestyle.

“The market for boutique spirits has been growing for years,” says Drew Lucido, mixologist and former beverage director of the award-winning Tempus. “Like anything upscale and higher-priced, having a celebrity as the face of the brand helps to sell the product.”

Lucido likens the category to perfumes, watches, or handbags. “If the consumer believes that someone famous is using the brand then it becomes simpler to convince them that they too should purchase it.”

Essentially, “It becomes a lifestyle choice, instead of just choosing what brand of tequila or wine you’re going to pick up for your party,” he notes. When you enter a bottle shop, these brands ask you not to compare whiskey to whiskey, but George Strait to Matthew McConaughey. You’re buying into a brand. Outside of the quality of the spirit, consumers take in an intangible aspect of identity: the star power, the storytelling, and the celebrity currency.

(Celebrities also have the funds and fuel to back a brand. The reason you see flashy campaigns and full-page spread magazine ads from Ryan Reynolds and Kendall Jenner is well, they have the money and brand value to land those marketing partnerships. Small brands don’t.)

“Almost all of the celebrity spirits that I’ve tasted have been solid products,” adds Lucido. “None of them have blown me away, but I’d certainly be happy to be offered some. If having Martha Stewart’s or The Rock’s name on the bottle helps them to break into the market then all the better for them. I’m always open to trying something new and always hoping to be surprised!”

If Snoop Dogg, singer of Gin and Juice, doesn’t release a strawberry-flavored gin best mixed with ‘juice’, who will? Sammy Hagar and Guy Fieri’s Santo ‘mezquila’ has a high cheese factor. But they clearly love it, and it feels like something the two legitimately enjoy drinking. Give Pitbull his Miami-produced vodka filtered through coconut husks! Long live Sarah Jessica Parker’s bottled cosmos!

But overall, Leppek poses the question: why not just support good brands, regardless of star power? “If celebrities have the means to invest very little time into a brand but reap the financial benefits of their endorsement, they will jump on this bandwagon.”

“Are the drinks any good?” he concludes. “Not good enough to support them over smaller family-owned brands.”