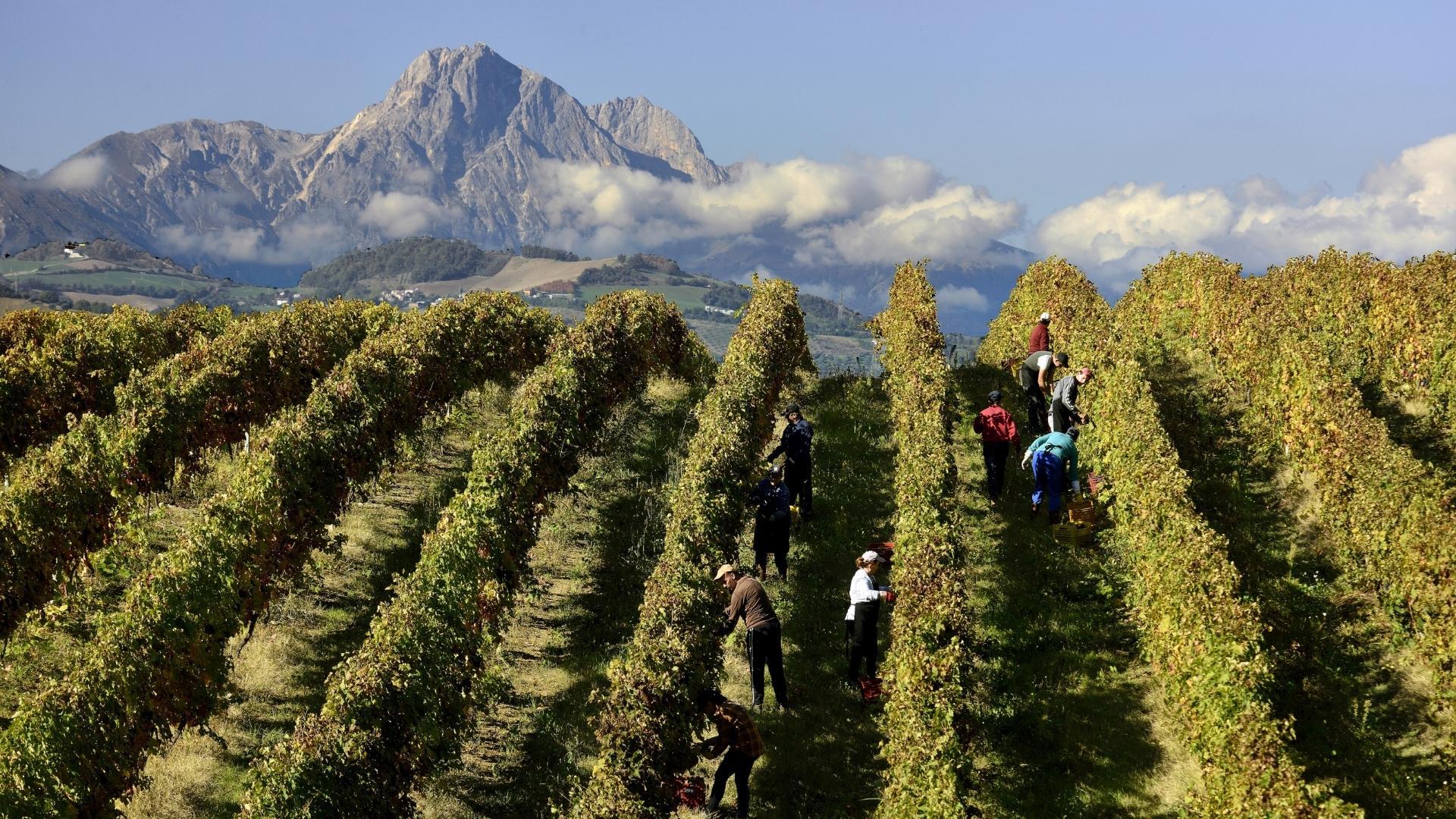 You could say the wines of Abruzzo suffer from an identity crisis. Many consider Abruzzese wines as big, bold Montepulcianos: complex, rich, and best served solely on winter evenings.

But Abruzzo’s Adriatic-inflicted terroir offers a wildly diverse region of wines far beyond oak-aged Montepulciano. There are delicate and highly age-worthy Pecorinos, racy Passerinas, and Cerasuolo: a cherry-hued deep rosé.

The region offers equally diverse landscapes, from rolling fields of farmland to coastal fishing villages where you can snack on shellfish at a Trabocco, a restaurant perched on a pier above the ocean. Or, drive inland into the high-altitude hills at the foot of some of Italy’s largest peaks.

“Abruzzo is really special because it’s an agriculture-focused region,” explains Catherine Fanelli, the wine director at Mel’s and Al Coro. “There’s amazing olive oil and sheep’s milk cheeses being produced there. The farmers are super passionate about what they do.” But because of the region’s farms, produce often overshadows the region’s wine. “It’s a less competitive wine-making environment than Tuscany or other respected wine-growing regions outside of Italy,” she notes. “To me, Abruzzo feels pure and down to earth.”

Abruzzo is roughly three hours east of Rome. It’s one of the greenest areas in Europe, accounting for 4,000 square miles of land largely filled with farms or forests. About 250 wineries and 34,000 hectares of vineyards make roughly 1.2 million bottles of wine per year, according to the Consorzio Vini D’Abruzzo. The entire region is protected by the first all-region DOC in Italy.

The only thing separating Abruzzo from the Adriatic Sea to the east are white sandy beaches. To the west, vast, craggy mountain ranges divide the region from Lazio. Two peaks — the Gran Sasso, Italy’s second largest peak, and the Maiella Massifs — in the Apennine mountain range crown the region. Consequently, the elevations impart significant diurnal shifts and moderate the sunshine.

Within the landscape are two main areas: inland, mountain-inflicted regions with a softer, more continental climate and a crisper coastal area of rolling sunkissed hills. In the former, “Colline Teramane, one of Abruzzo’s two DOCGs, is characterized by clay and limestone,” says Fanelli. “Limestone is a hallmark of a great wine-growing region.”

The second DOCG, Terre Tollesi Tollum, is just 3 miles from the Adriatic sea. Sea breezes and its location in the shadow of Mount Maiella, just 19 miles away, define this coastal microclimate. Wines here must come from grapes cultivated in and around the city of Tollo and bottled within the DOCG.

While Montepulciano may reign, the region produces white wines with beautiful depth. “Trebbiano d’Abruzzo tends to be more medium-bodied, with Chardonnay-like qualities to it,” says Fanelli. “Trebbiano has a full mouth feel and complexity and can be slightly waxy depending on the wine-making style, especially if it sees oak aging.”

But not all Trebbiano is created equally. Outside of Trebbiano Abruzzese, Bombino Bianco and Trebbiano Toscano also dot the region. Cataldi Madonna winemaker Luigi Cataldi Madonna once told Ian D’Agata (in Native Wine Grapes of Italy) that he believes that only 20% of all Trebbiano grown in Abruzzo is actually Trebbiano Abbruzzese. Abruzzo’s Trebbiano can be identified by its large leaves — the grape loses acidity if it over-ripens and hates the wind, so these larger leaves work to protect the bunches.

The region’s other white grape, Pecorino – named after sheepherders that munch on the grape as they walk their flocks by — tends to be fresh and floral, with notes of lemon, green apple, and white peach. The grape is far more rustic and climate resistant, adoring the cool mountain microclimates and clay-rich soil of the higher slopes of Abruzzo.

While rich Montepulciano may be the region’s entry point, Cerasuolo casts a real spell over drinkers. It’s mineral-driven and complex. Bitter, tannic, and wildly age-worthy — characteristics not often associated with rosé.

“Cerasuolo d’Abruzzo has lovely savory, cherry tones,” says Fanelli. “We pour one by the glass at Al Coro, and it has been exciting to broaden peoples’ perception of rosé.”

“Personally, I enjoy a lovely Cerasuolo in the summer,” says Jonathan Waxman, the beverage director of Barbuto. “I know most people enjoy their lighter, more straightforward Provencal summer water rosé, but the beefier and more dynamic Cerasuolo hits the spot like no other.”

Christiana Tiberio, one of the most forward-thinking winemakers in Abruzzo, notes that the style comes from the mountain areas of Abruzzo. “But the grapes couldn’t fully ripen in that climate, so the destiny of Cerasuolo was born.” With these wines, the focus is on the crunchiness, the energy, and the vibrancy, she notes. “Cerasuolo was born in our cold climate, and it’s the cold climate that brings that acidity and the bright cherry color.”

Her iterations — highly accessible and wildly flavorful – are made with free-run Montepulciano that thrives in the clay soils of Cugnoli. “The clay pushes the ripeness of the flavors forward,” says Tiberio.

“When I was younger,” says Waxman, “I had an intense love affair with the Montepulciano grape. I have never been one for wines that are very high in acidity, and the low acid and subtle tannins expressed from the grape sat right in my comfort zone.”

Both Waxman and Fanelli cite Emidio Pepe, run to this day by the titular Pepe and his daughter Chiara, and Edoardo Valentini for setting the mark for Montepulciano. “[Pepe] proved that Montepulciano is an age-worthy grape and can hold up to Italy’s other great wines,” says Fanelli.

While 50% of the region’s vines are Montepulciano, it’s hard to define the grape by one trait — it’s somewhat of a jack of all trades. The grape is versatile, able to grow across the region and be vinified and aged in everything from stainless steel – simple and fresh, with transparency of fruit – or in oak casks for depth and concentration. As a result, they can range from cheap and cheerful to fleshy and rich. The latter is more common but isn’t quite for everyday drinking – they’re dense, complex and powerful.

In contrast, the folks at Cataldi Madonna make a Montepulciano with a lighter touch. “In 2012, my father was the first producer to make Montepulciano without oak. He’s a crazy man,” his daughter Giulia who currently commands the vineyard, laughs, “but our focus is drinkability — less oak, more balance.”