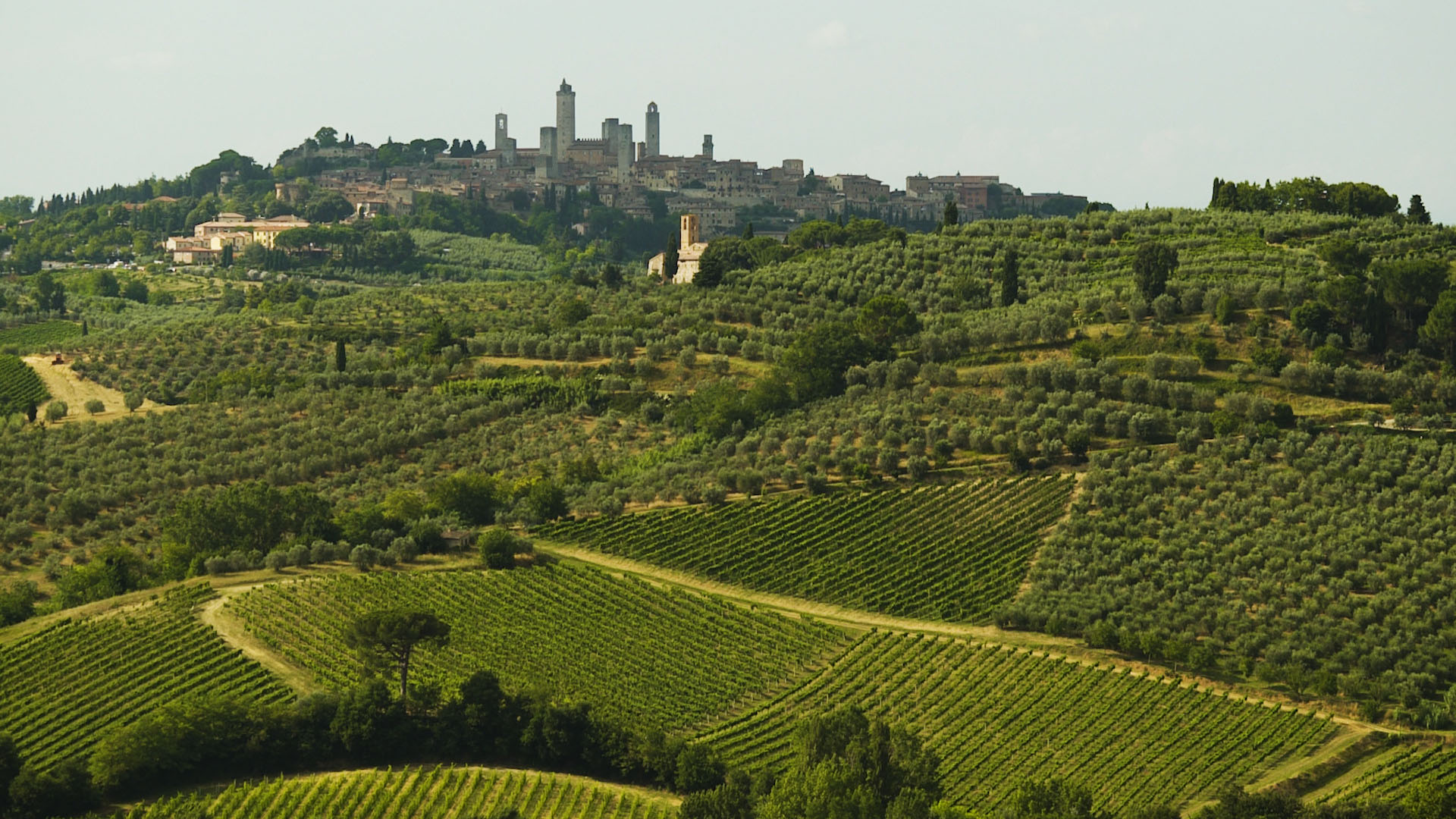 Tuscany conjures up images in our minds unlike any other place on earth. Rolling hills and vineyards, orange sunsets, and terracotta roofs. And let’s not forget about the famous Chianti straw basket. For some wine drinkers, the terms “Tuscany” and “Chianti” are interchangeable. However, each word signifies different things when it comes to wine. The region’s wine landscape is diverse and complex.

Tuscany lies in central Italy and stretches along the country’s western coast. The region is one of Italy’s most prominent wine-growing areas and accounts for roughly 5% of all wine made by volume. However, in terms of value, Tuscany lays claim to about 10% of all Italian wine.

In the western portions of Tuscany, along the Ligurian Sea, much of the terrain is flat, while hills and valleys are more prominent in the south. Higher altitude vineyards grow more centrally and inland. In those spots, the elevation of the Apennine Mountains helps alleviate the region’s warm temperatures and moderates the acidity levels as the grapes ripen.

The region is famous for Sangiovese, a late-ripening grape that’s dominant in DOC or DOCG blends. It also ages incredibly well, particularly in versions that have spent an extended amount of time in oak. Generally, Sangiovese is a medium to full-bodied wine with high tannin levels and high acidity. It boasts red berry flavors with black pepper spice and herbaceous qualities. Aged versions impart more rustic qualities, like earth, roasted vegetables, cedar, and game.

The region is home to 41 DOC and 11 DOCG that are spread across ten provinces. Among them, four areas hold the most significance.

Chianti is Tuscany’s most inland and largest region, producing 8 million cases per year. It also has one of the more complicated hierarchies to wrap your head around. Two broad versions – both made mainly of Sangiovese – are Chianti DOCG and Chianti Classico DOCG, the latter being the more refined and often from higher elevation vineyards.

Directly south of Chianti is Brunello di Montalcino DOCG. Here, the altitudes are on foothills, meaning warmer temperatures and drier conditions. However, sea-breezes make their way from the southwest, which provides some cooling for the grapes. Because the climate is slightly warmer than Chianti, Brunello is often more full-bodied with decadent and intense flavors.

Requirements dictate that Brunello di Montalcino DOCG be made entirely of Sangiovese and age for at least four years before release. Riserva wines require five years of aging. Brunello is known for its ability to cellar, often needing a decade for the tight tannins to soften. Excellent vintages can cellar upwards of 20 years.

In this clip from A Closer Look at Brunello on SOMM TV, Florio Gierrini from Il Paradiso di Manfredi speaks about the use Slavonian oak to age Brunello.

Vino Nobile di Montepulciano comes from vineyards that surround the town of Montepulciano in southeastern Tuscany. At least 70% of the wine must be Sangiovese, known locally as Purgnolo Gentile. Supporting red grapes can be local varieties such as Canaiolo or Mammola. And up to 5% can be a white variety, such as Malvasia.

The birth of the Super Tuscan happened on the flat plains of the Tuscany coast. Here, sea breezes cool the area rather than altitude, providing ideal conditions for international varieties, namely the red grapes of Bordeaux – Cabernet Sauvignon and Merlot.

Its composition of non-indigenous grape varieties is what defines a Super Tuscan wine. The Bolgheri area became known in the mid-1970s when a 6-year-old wine, Sassicaia, earned acclaim at a Decanter event, winning over several Bordeaux wines.

The quality and reputation of Super Tuscan wine grew over the next couple of decades. The category sold under a simple IGT Toscana designation because of its unique, non-indigenous set of qualifiers.

While many Super Tuscan wines still use the IGT designation, producers in Bolgheri could begin using DOC status when it was approved in 1994. Some of the most known producers in the area include Tenuta Dell’Ornellaia, who produce Ornellaia and Guado al Tasso of Antinori.