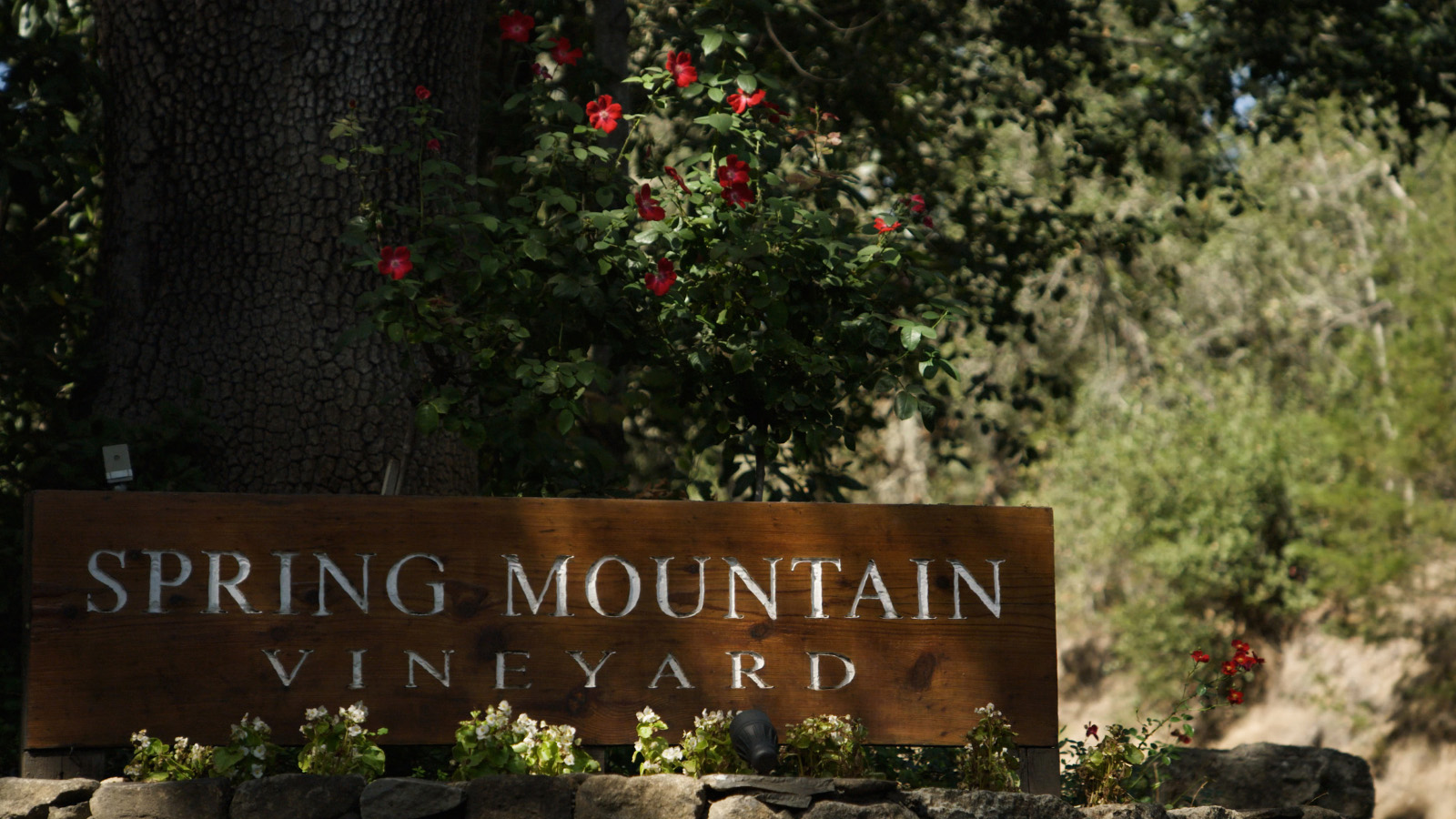 The rich history of Spring Mountain Vineyard is a web of mystery and excitement. With records dating as far back as 1872, the inner workings of three separate properties weave tightly with thrilling detail. The outer web provides the shimmering structure, linking the properties into what we know SMV as today.

The largest of the three properties is La Perla, with 435 acres. Meanwhile, the smallest property is Chevalier, with 120 acres, while Miravalle (257 acres) sits in the middle. Between the three, there’s 150 years worth of marriages, divorces, accidental deaths, and deaths deemed ‘mysterious’. That’s not including Prohibition, fortune from gold, loss of said fortune, and an incredible number of disastrous fires. The web is dizzying and jaw-droppingly complex. That’s why SOMM TV sought out Spring Mountain Vineyard’s Director of DTC – and resident historian – Keith Baker. Baker has been with the company since 2017 and curated all of the information for SMV’s historic mountain tour. We used his resources to determine the most pinnacle dates in the winery’s history.

In 1872, German-born George Lemme moved to the Napa Valley – via Boston and San Francisco – to purchase 65 acres of land from the State of California. His family named the property ‘La Perla’ (or, The Pearl), and they planted Cabernet Sauvignon. The winery stayed in the Lemme family until 1939. But, when there were no dependents to pass it down to, Henry Hummel purchased the property. Hummel’s first interaction with the winery occurred a decade earlier, however, in 1929. During Prohibition, Hummel and his brother helped sell La Perla’s grapes to private buyers in New York.

Hummel was the owner of the property for only a handful of years. In 1944, Jerome Draper purchased the land along with its neighboring property that Beringer originally owned. Draper became a big name in the area and was a founding member of the Vintners Club in San Francisco – of which he was the first president. Draper died in 1984 and left the property to his son and daughter. The property remained in family hands through a bout of Phylloxera in 1985 and eventually sold to Spring Mountain Vineyard in the early 1990s.

The Miravalle property was purchased in 1884 for Tiburcio Parrott. His stepmother bought it for him following his father’s death. That same year, 125 acres of grapes were planted along with olive trees and citrus groves. Parrott commissioned the construction of Chateau Miravalle in 1885, the founding year, costing $60 thousand (nearly $1.7M in current U.S. dollars). In 1894, Parrott died from stomach cancer. His widow sold off their belongings and moved, leaving Miravalle empty for decades.

In 1962, Mike Robbins bought the property. He started growing Chardonnay and Cabernet Sauvignon. In the mid-1970s, Robbins expanded his holdings by 258 acres and began restoration of the mansion. With approval from the Disney family, he also began construction of the winery, which mimics the look of City Hall in Disneyland. In the 1980s, the mansion, winery, and surrounding vineyards were used in exterior shots for the 1981 pilot “The Vintage Years”. The show was renamed “Falcon Crest”, and film crews returned every summer for six weeks to reshoot until 1990 when the show ended.

Fortune Chevalier was born in France in 1815. He left his home country in 1849 for the California Gold Rush and lived in Placerville and Sacramento before purchasing the current SMV property in 1885. In 1886, his 23-year-old wife (50 years his junior) filed for divorce, citing emotional and physical abuse. Three years after that, he deeded the property to his youngest son, George. This decision cut his two older sons from the inheritance.

George began construction of the property’s Chateau in 1890. It was completed a year later, which many consider the founding year. In 1906, George and his family made the permanent move to the property after their home in San Francisco was destroyed by the great earthquake. Further tragedy struck in 1914 when George bought his son a 22-calibre Winchester. The 11-year-old died after the gun accidentally discharged into his stomach. George sold the property after the incident.

The Chevalier property changed hands a couple of times before its purchase by H.H. Hart in 1918. Hart initially made his gold fortune in Alaska a few decades earlier. En route to Berkeley, CA in 1901 with his wife, their boat – the S.S. Islander – hit an iceberg and sank with approximately $1-2M onboard. He earned his fortune back soon after in Fresno by investing in the Coalinga oil fields. Hart died in 1927 following a mysterious 3-month illness. His second wife, Louise, lived at the property with their children until she died in 1933. In 1940, Hart’s children sold the property. It changed hands several times until 1984 when John and Gill Nickel purchased it, owners of Far Niente Winery. They replanted the vineyards to fight Phylloxera in 1986, only to have a Phylloxera mutation attack the new vines in 1991.

Throughout the 1990s, vineyards on all three properties were replanted after being purchased by financier Jaqui Safra. A connoisseur and collector of first-growth Bordeaux, Safra was keen to elevate the mountainside wines to an ageworthy level – similar to what he valued in French wine. With his purchase, he acquired a small collection of Cabernet Sauvignon from the 1970s and 1980s which would later be integral pieces in the new Library House. In 2000, the winery’s reserve line became Elivette, a name that pays homage to Safra’s parents – Eli and Evette. Given Safra’s passion for Bordeaux, Elivette includes all five classic Bordeaux grape varieties.

In an episode of Behind the Glass on SOMM TV, Dermot Whalen (Vice President of Sales & Marketing) and Barrett Anderson (Winemaker) discuss the evolution of varietal proportion in the most recent vintage of Elivette.

Upon Safra’s purchase in 1992, the tasting room on the Miravalle property closed for ten years. In 2002, it reopened for guests as the Library House. Today, the Spring Mountain Vineyard website offers a number of tastings, most of which are 90-minute immersive and educational experiences.

On September 27, 2020, the Glass Fire spread from Howell Mountain to Spring Mountain. It destroyed 12 historical structures on the property and ruined the 2020 vintage – which was days away from being picked. Fortunately, the main winery, the caves and the Miravalle Mansion remained intact.