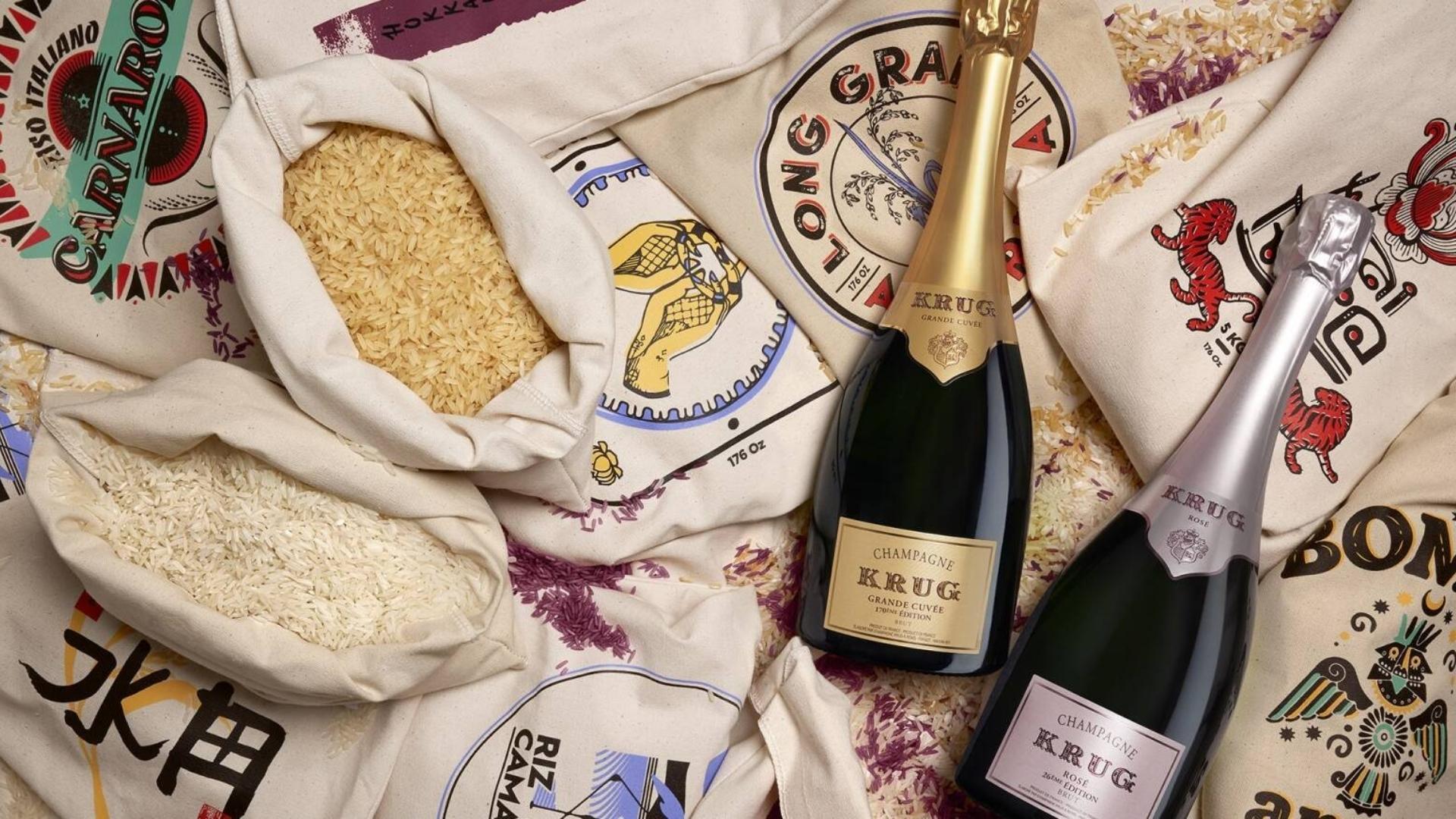 Photo courtesy of the House of Krug

In 2015, the House of Krug launched Krug x Single Ingredient, honoring the legendary ethos of their 1843 founder, Joseph Krug, and his dedication to consider each plot as one ingredient. “We inherit a unique approach to Champagne creation where we consider each plot, through its wine, to be a single ingredient in Krug Champagne,” explains Krug Cellar Master, Julie Cavil. Stemming from this philosophy, the program is a nod to the maison’s craftsmanship as they invite chefs from around the world to interpret the annual single ingredient in recipes to pair with Krug Grande Cuvée and Krug Rosé. In 2015 that ingredient was potato. And in 2022, the ingredient is rice.

Connecting Through a Culinary Chameleon

“It is an ingredient that shines most brightly when blended and not only will it support other flavors and aromas on the plate. Its texture – creamy, chewy, or even crunchy, depending on variety and cooking style – will accentuate different facets of, and interact uniquely with Krug,” says Cavil. Not to mention, “it is the backbone of emblematic national recipes everywhere.” For example, according to National Geographic, two thirds of the world’s population depend on rice as a primary food source.

Though Cavil shares that Krug’s annual single ingredient is always humble, ubiquitous, readily available and internationally accessible. Previous ingredients include onion, fish and egg — this year, rice is perhaps the most prominent use of the program to emphasize the universal connection to our food sources and the symbiotic relationship between agriculture and humans.

“The culinary chameleon we call rice is a global symbol of sustenance and vitality, a unifying staple that today nourishes half the world’s population,” says Cavil. “The idea is to connect people around food in an inclusive and responsible way.”

Krug successfully executes the program by leaning into their worldwide ambassadors, or Ambassade Chefs, who rely on local resources to present their creations. This year, for the first time, Krug produced a cookbook, Rice Here, Right Now. The book allows a platform for these notable chefs, of which there are 78 Michelin stars among them, giving them opportunity to describe their interpretations of rice and method of sourcing.

The book illustrates 75 cultural interpretations and dozens of varieties of rice. From Singapore-inspired street food to Spanish paella and Italian risotto to Japanese sushi.

“I have fond memories of my Riso, Patate e Cozze (rice, potatoes and mussels), which encompasses land and sea,” writes Chef Leonardo Vescera of Il Capriccio in Vieste, Italy. His amuse-bouche consists of a crispy fried rice wafer stacked with a spoonful of fried potatoes and one shelled mussel — cooked with oil, garlic, thyme and marjoram — stuffed with pecorino mousse. “I always used to ask the local old women for the secret to preparing the dish. But they gave me measurements such as ‘a spoon, a glass, a fist,’ and I never managed to replicate it as they did.”

In Hong Kong, Chef Robin Zavou of The Krug Room, Mandarin Oriental, conceptualized baked rice pudding ice cream with lime syrup and Japanese mango. “Rice pudding was something that my grandma used to make, and I loved the skin that formed on top after baking,” shares Zavou. “Turning that into ice cream gives a different twist on an iconic dessert. Serving it with mango adds an Asian element.”

“Education is and always will be important. Through the Single Ingredient recipe book, we shine a light on local ingredients and the progressive practices of our Krug Ambassade Chefs, who are finding innovative ways to cook sustainably,” notes Cavil.

For example, the program is an opportunity for the participating chefs to evaluate and reinvent some of their founding principles. There’s also an educational element. Inspired by the camaraderie of participating in the program, it’s further amplified by the opportunity to travel to the ingredient’s country of origin. The immersive itinerary educates on the ingredient’s history, traditions, and contemporary evolution among consumers.

For the year of the onion, Renaud Butel, International Director at Krug, recalls a trip to a farm in Rajasthan, India, where he ate lunch with the accompanying chefs, sharing 24 Michelin stars between them on the floor. “I remember chefs coming to me and telling me it’s one of the best meals they’ve ever had,” shares Butel. “That was for me, a moment where it’s not about the ingredient, it’s not about Krug, it’s not just about exchanging discovery of culture, it’s about self-discovery. And that trip, when we left India, when all of us left India, we knew a bit more about who we were as individuals thanks to that journey.”

As Krug continues to illustrate itself as a food-pairing Champagne, Butel clarifies the desire to have a presence on menus in a meaningful way. Specifically, he summarizes the single ingredient initiative beginning as a trade program that’s evolved into an all-encompassing communication program.

“Each year, it is a way for us to connect – among winemakers and Krug Ambassade Chefs, but also Krug lovers,” adds Cavil. “The annual Single Ingredient is a chance for us to share something and bring together our communities around the world.”