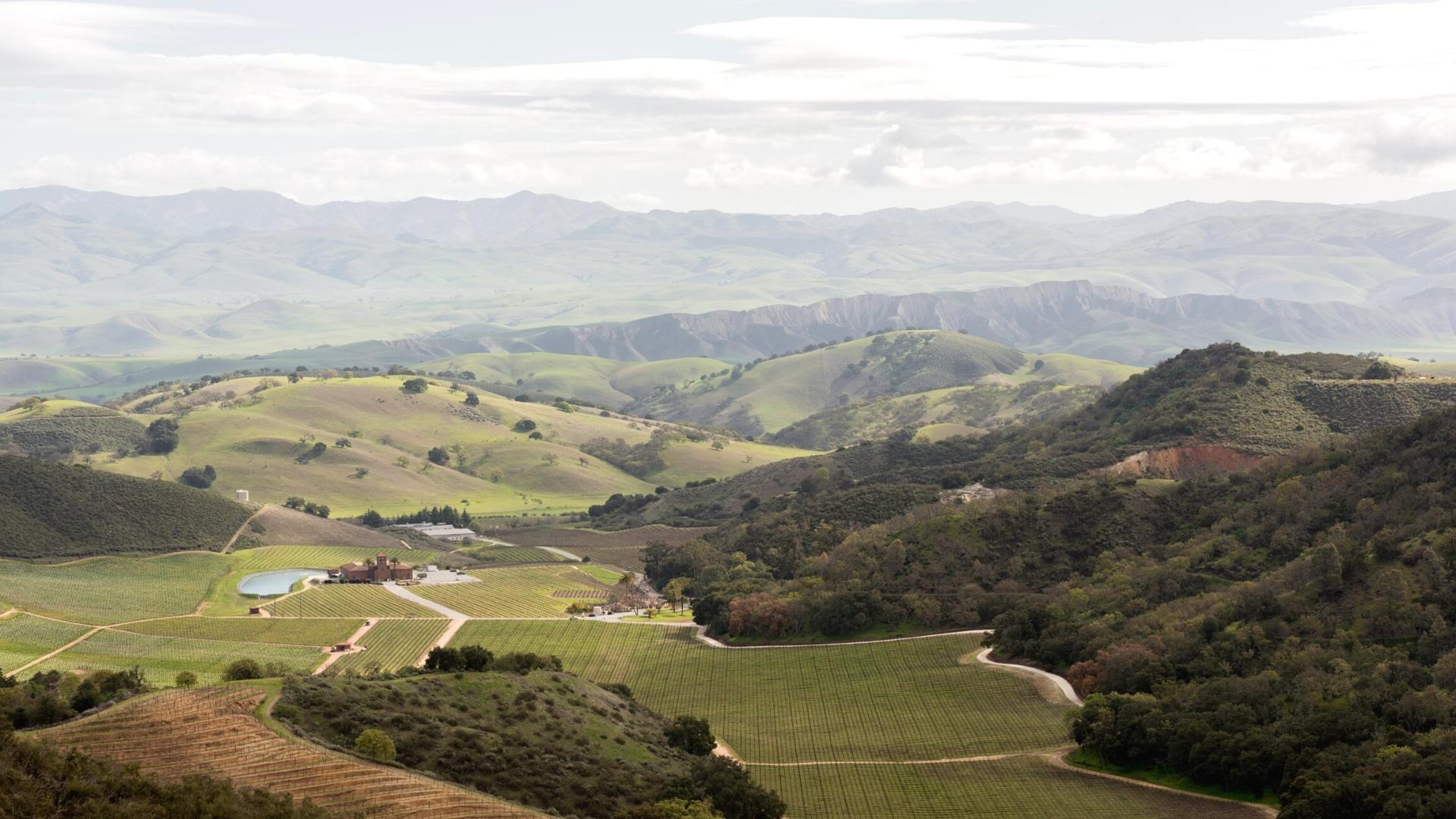 But one wine region in California’s San Benito County does. Nestled in the shadow of the Gabilan Mountain range near Monterey Bay, Cienega Valley sits along the limestone and granite-rich San Andreas Fault. It’s this secret seam of limestone that Bourgogne-lovers covet, and why so many winemakers flock here to make premium Pinot Noir and Chardonnay.

Josh Jensen started the migration in 1975 when he founded Calera on Mount Harlan. Inspired by a trip to Bourgogne, Jensen scoured stateside for two years before finding suitable limestone soils on this high altitude Central Coast site.

“Calera” means ‘lime kiln’ in Spanish and nods to an abandoned limekiln on the site. In addition to planting vineyards, Jensen repurposed an existing structure into a gravity-fed winery, revolutionary at the time.

“Mount Harlan is showcased by being around limestone,” says Mike Waller, winemaker at Calera since 2009. “There are pockets that have decomposed granite and other soil types that probably don’t have as much limestone deposit. But what characterizes our wines is the limestone itself.”

Calera constitutes the only vineyard within Mount Harlan AVA. Designated in 1990, the appellation comprises 7,400 acres, with minimum elevations of 1,800 feet above sea level. “So we are basically a monopole,” says Waller. Jensen’s success with Pinot Noir and Chardonnay eventually piqued the interest of major players; Duckhorn Wine Company purchased Calera in 2017.

“Limestone is a thread that runs through the history of great Pinot and Chardonnay,” says San Francisco native Christian Pillsbury, who founded Eden Rift in 2017. “Eden Rift is a really special place that has been identified with California wine growing and Pinot Noir since the late 19th century,” he says. “As a student of America’s wine story, I was looking for the authenticity that only a long story can provide. When the opportunity to invest in Cienega Valley and stewardship of Eden Rift presented itself, it was a no brainer. This estate is the ultimate love letter to an uninterrupted legacy of California viticulture.”

Eden Rift takes its name from the novel “East of Eden” by author John Steinbeck. Set in early 20th century Salinas Valley, the book highlights the Monterey Peninsula’s long agricultural history. So Cienega Valley doesn’t just have soils in its favor. It has history.

So does Eden Rift. It claims fame as California’s oldest operating winery, dating back to 1849. The sprawling 120-acre estate reclines along the San Andreas fault, incorporating a patchwork of valley floor, terrace, and hillside vineyards with varying exposures. “For me, it’s a tripartite interest that I have in this place,” explains Pillsbury. “Its climate, soil, and history. That’s what it all comes down to. And we’re the one pocket of limestone in California available for Chardonnay and Pinot Noir.”

“The Pinot family was born of limestone, and the interaction of these vines and these soils are part of what we understand traditional Pinots to be,” he continues. “The soils are well-drained but act like a battery for water to slowly release, keeping the vine sated, but not drowning. They express an extraordinary minerality that we believe is due to the presence of these soils.”

Aside from soils and history, Cienega Valley’s climate favors fickle Pinot Noir and terroir-influenced Chardonnay. Monterey Bay contains one of the world’s largest and deepest marine trenches, an underwater canyon that kicks up icy winds. These marine breezes funnel through Cienega Valley, creating a cooling effect.

“We are only 20 miles from the ocean,” says Cory Waller, Eden Rift’s winemaker and brother of Calera’s Mike Waller. “But if you go to the top here, at three o’clock in the spring and summer, the wind hits every day like clockwork. And it’s why we don’t rely as much as a lot of other people on diurnal shifts. Still, our nighttime temperatures generally average [in] the high 40’s F° (8-10°C). We do get heat, but we’re not as dire.”

“Top winegrowers in the Cienega Valley will tell you that they’re not trying to emulate Burgundy per se, but it’s difficult to avoid the obvious comparisons once you learn more about the region,” adds Master Sommelier and winemaker Christopher Miller of Seabold Cellars, who sources Pinot Noir and Chardonnay from Eden Rift. “Aside from the telltale limestone soils, elevations are near identical. Historically, Burgundy’s top vintages are warm and dry, bringing us into the same range as Cienega Valley’s growing season. And as an added bonus, there isn’t nearly as much disease pressure as in Burgundy.”

“I think that we have a number of advantages, quite honestly,” concurs Pillsbury. “The history of wine growing is amazing; we have no phylloxera, land values have not been driven by hedge fund billions (necessitating decisions being made solely for economic benefit), and Hollister is still truly a farming community at heart.”

“Whenever we talk about being on the periphery of something, we naturally draw in mavericks and oddballs,” sums up Pillsbury. “If you were looking for a sure-fire, 100-point Cabernet made in a Napa-style, where would you go? You’d go to Napa. If you are looking to break free from the expectation (or obligation) to make something “practical”, you head to the edges of what’s known. Randall Grahm, Josh Jensen, Bob Lindquist, Jim Clendenen, these are all people who have headed to the outside of what’s known to create something new. This has been happening in Cienega Valley for 173 years, starting with Theophile Vaché in 1849. We’ve been on the outside and the inside of what’s central. It just depended on where the “center” was when someone did the measuring!

“It’s going to be a lot of fun to see what the next decade brings to the area,” Miller concludes. “For one of the United States’ oldest growing regions, it feels like we’re just starting to tap its true potential. “