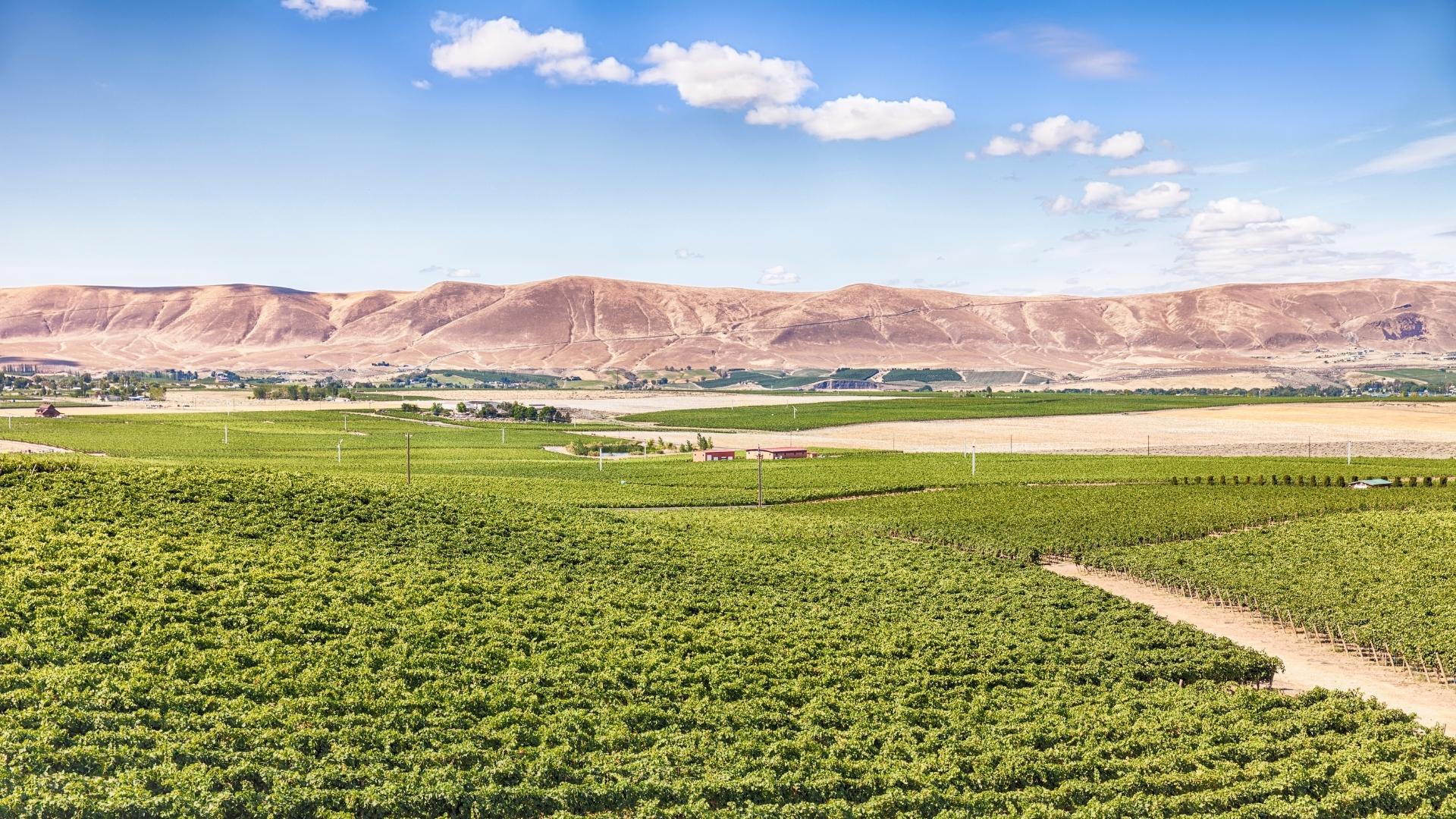 Wanting to have it—whatever it is—both ways is a very human desire. There are few concrete examples of how one can, in fact, simultaneously indulge in two incompatible ways of being. Red Mountain wine, unlike, say, open relationships or bipartisan legislation, somehow always lets us have it both ways, no strings attached.

Red Mountain delivers Old and New World in both flavor and complexity across the board, but especially in its red wine blends. In the world of wine, the Old vs New World battle royale is primarily rooted in history and geography. Old World wine means Europe, where what we think of as wine was developed and systematized centuries ago. The rest of the world signifies the New. But it is also shorthand for styles and flavors. Old World wines tend to be lighter, with more prominent herbal, floral and earthy notes. In contrast, New World wines are often higher in alcohol, more opulent and fruit-forward.

Hardcore partisans will disagree, but most wine lovers believe both styles have a time and place. And for those who want both at the same time or don’t want to take sides, Washington State’s small but mighty Red Mountain offers the structure, restraint and elegance of the Old World with the fruit-forward energetic joy of the New.

It all comes down to the terroir.

The first grapes were planted in this southeastern Washington region in the summer of 1972. Pioneers John Williams and Jim Holmes were amateurs and hobbyists. As engineers by trade, they were deeply invested in research and problem-solving. They were adept at seeing transcendent terroir where everyone else just saw scrabble and sagebrush.

Neither indigenous people nor early European settlers found much of interest in the region, and it lay fallow. There was nary a trace of basic infrastructure, even in 1972. Over three years, Williams and Holms purchased land (shelling out $300 an acre), obtained power, water, and rights-of-way, and planted 10 acres of Chardonnay, Riesling and Cabernet Sauvignon grapes.

Red Mountain as we know it today was born in 10,000 B.C. when catastrophic floods escaped from the melting ice dams forming Lake Missoula. Those floodwaters shaped southeastern Washington’s landscape, dumping high-mineral, high-carbonate eroded sands, gravels, cobbles, and boulders on what we now call Red Mountain. The name is a smidge hyperbolic: in reality, elevations within the region top out at 1,400 feet above sea level.

The terroir is the key to Red Mountain magic. The five pillars that define it are:

The floods deposited high alkaline soil with sizable levels of calcium carbonate and a granular consistency. This allows vines to dig deep for moisture and nutrients, an increasingly important consideration in a changing climate. It also creates grapes with elegance and refinement.

The Cascade Mountain rain shadow provides the desert climate with an average annual rainfall of seven inches. However, very little falls during the growing season. This lack of moisture means there’s little mildew or mold pressure, naturally eliminating the need for much chemical intervention.

There is a significant diurnal swing from 90°F (32°C) during the day to 50°F (10°C) at night. These higher daytime temps and lower nighttime temps help the grapes reach optimal ripeness while locking in brightness, liveliness, and structure.

Evolution of the Red Blend

The pioneers of Red Mountain saw its promise. But, it took several years of trial and error for many to see its true destiny: growing red grapes that can be blended into wine that transcends categorization.

Many reds that thrive on Red Mountain—Cabernet Sauvignon, Cabernet Franc, Merlot, Petit Verdot—have been part of the OG red blender Bordeaux for centuries. It would be easy, and not imprecise, to dub many of Red Mountain’s best (like the Quilceda Creek Vintners Red Mountain Cabernet Sauvignon, which has earned 99 and 100 points multiple times from The Wine Advocate) Bordeaux-style. But to do so would be a disservice to the region’s particularity.

“I was one of the first people to do red blends in Washington in 1992 at DeLille. We ended up really hanging our hat on it,” Upchurch says. Indeed, DeLille was one of the first five wineries in the entire state to earn five stars from Robert Parker. Over three decades, more than 700 wines have earned 90+ ratings from key wine critics worldwide.

“We found that the whole is better than the sum of its parts,” Upchurch explains. “We experimented and found that Cabernet Sauvignon, Merlot, and Cabernet Franc worked beautifully in the Red Mountain terroir. Then we began adding Petit Verdot.”

Today, he remains onboard as a partner at DeLille and has also gone out on his own with Upchurch Vineyard, where he and his team have planted 18.5 acres and focus on blends of Cabernet Sauvignon and Merlot.

At Fidélitas, founded in 2006 by Charlie Hoppes, second-generation winemaker Will Hoppes explains that they trust their eight Red Mountain growing partners to “do their thing” and focus on allowing those grapes to communicate their complexity and elegance through thoughtful cellar care.

“The best of Red Mountain wine balances New World fruit and concentration with Old World structure,” Hoppes says. “It can be opulent and elegant at the same time at its best. A lot of that comes from the diversity of soil. Also, the wind is a big part of the terroir, delivering this dusty tannic structure. We are really lucky here because my dad has been building relationships for decades. He’s been able to give input to growers on what clones he wanted them to plant.”

Their network of long-standing relationships yields premium grapes from 30 blocks from Red Mountain vineyards plus their own 10 acres of estate vineyards.

“At the peak of harvest, we have up to 60 fermentations going. We ultimately release more than 20 red blends and four whites,” Hoppes says. “We are hands-off, we don’t intervene a lot, but we use a variety of vessels to add complexity.”

The team uses French oak barrels, which can hold about 2.5 tons of grapes. They also use 500-liter Puncheons that they tip over on the side and roll in lieu of classic punch downs for a gentler effect. Their ultimate blends sometimes allow Cabernet to lead. Other times, they give Merlot the upper hand, delivering additional layers of best of both worlds vindication.

Over at Kiona Wine, founded by pioneer John Williams and led today by his grandsons JJ Williams, who is GM, and his brother Tyler, who is the winemaker, the team aims to precisely present a taste of their unique place through the way they grow and produce their wines. With 270 acres under vine and 20 varieties, Kiona is still arguably best known for its red blends.

“When it’s time to blend, my brother and I look at our barrels downstairs the way we used to look at a bin of Legos,” JJ says. “We sift through the pieces and try to build something compelling that will appeal to a variety of people.”

Their approach allows them to produce mid-range blends, premium bottlings, and experimental bottlings that they can sell in the tasting room and as special releases for their wine club.

“We’ve found that while single variety wines can be great. But they also impose an arbitrary restraint on the winemaker and the vintage,” JJ says, explaining that the weather can sometimes impact one grape variety more than the other in certain years. “By being able to blend multiple varieties, it gives us freedom without a formula to express the best of our vineyards every year.”

The Future of Red Mountain Wine

The first winery on Red Mountain was bonded in 1980, but it wasn’t until 2001 that it became an official AVA. Today, it is the smallest AVA in Washington State but one of the most densely planted. More than half of its 4,040 acres (57%, to be exact) are growing vines.

Far-reaching experiments have gotten the region recognized. Red Mountain first became known by other winemakers in Washington, who began using the area as their premium source of grapes in the late 90s. Then, international organizations like Tuscany’s iconic Marchesi Antinori began moving in and building out multi-million vineyards and wineries. So what’s next?

Projects like WeatherEye Vineyards come to mind. Cameron Myhrvold purchased 280 acres that sprawl up a windy ridgeline in Red Mountain in 2004.

“He purchased the land in 2004 but didn’t begin planting until 2016. That tells you a lot about how much planning went into every detail,” says winemaker Ryan Johnson, who previously managed Ciel du Cheval Vineyard and co-founded Force Majeure Vineyard. 11 varieties grow across thirty-three acres, with 60 individual blocks. While he didn’t want to share precise numbers, he estimated that the price of the real estate, along with their meticulous development and farming, meant that their land cost between four to 10 times the price of standard vineyard development in Red Mountain.

“The vineyard shares a lot of the characteristics of Red Mountain. But because we’re up on a ridgeline, the conditions are different,” Johnson says. “Down at Kiona, the wind might be 7 miles per hour, but up here, it’s 20 to 30 miles per hour. That affects everything we do. We also have access to southern and northern exposures, which means we can balance out some of the weather extremes that are becoming so common more easily.”

The vineyard is farmed in micro-blocks with various planting densities and trellising methods specific to the soils, topography and exposure.

Johnson says red blends are their “bread and butter” for their own micro-line (150 cases across two cuvées). But the many producers they grow for believe that classic Rhône varieties like Grenache and Syrah are the key to the future.

“We wouldn’t be up here without the pioneers who initially planted in Red Mountain,” Johnson says. “And we’re building off of the incredible foundation they laid. Red Mountain’s grapes maintain acidity and freshness because of the wind, the soil, and the diurnal swing. And there’s the amazing tannin structure too. The wines here are amazing upon release but are also built for decades of aging. We’re excited to see what’s next and share some of the more savory aspects of Red Mountain that we’re finding here.”