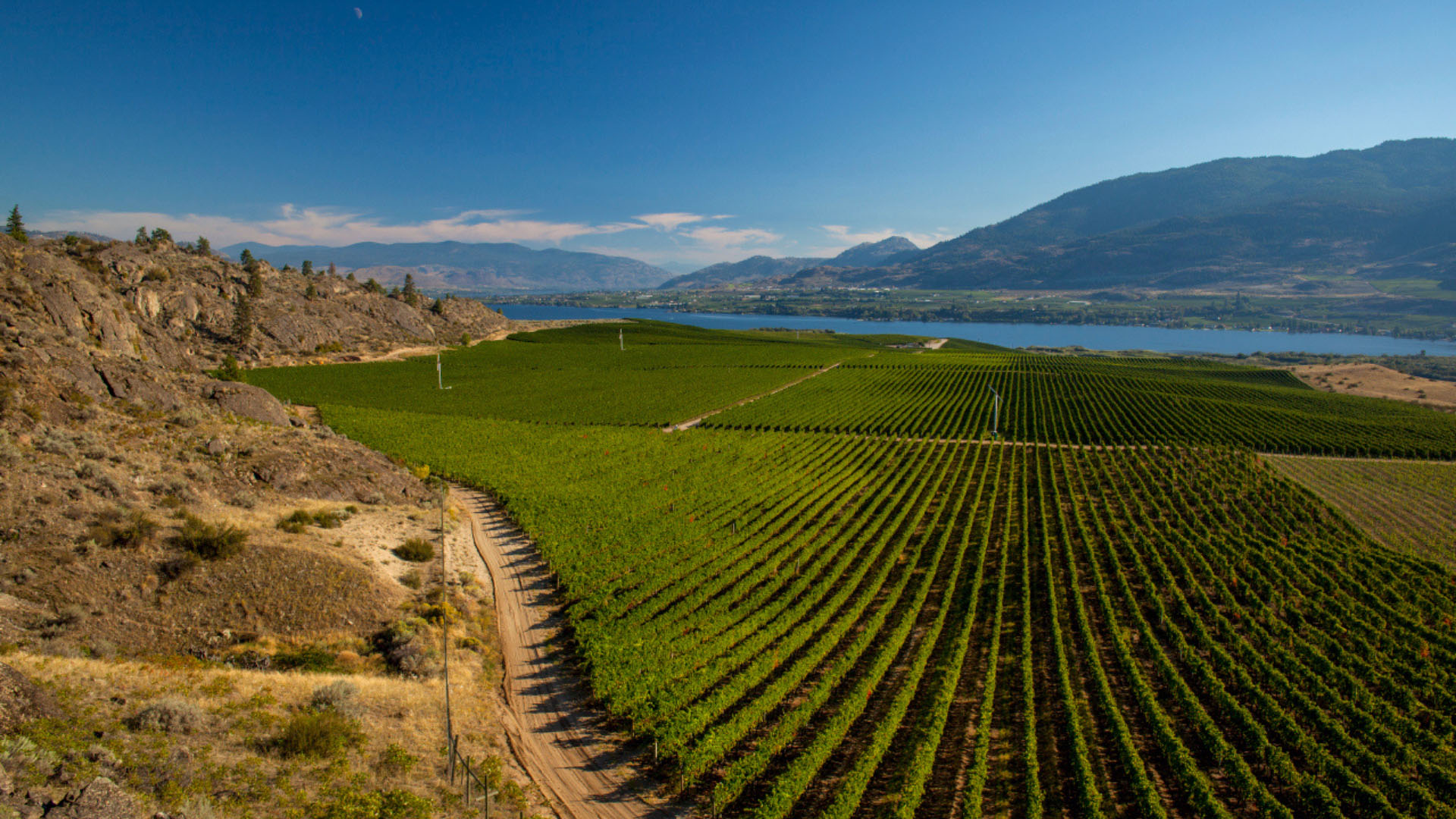 Oliver, Osoyoos, and the Similkameen Valley are not globally recognizable wine regions. But in Canada, they are synonymous with quality South Okanagan wine production. Generally, Canada has a cool climate, with many grape-growing areas near the northern 49th parallel. Yet, the climate in the deep south of the Okanagan Valley is unique. It is arid, with desert-like conditions.

The 20 miles of South Okanagan terroir, which sits on the traditional land of the Syilx First Nations of the Okanagan, is diverse. Ancient glacial mineral deposits and mixed soils add to each region’s identity. Additionally, the bodies of water in the area are an important moderating influence. The Okanagan River connects Vaseux Lake north of Oliver, down to Osoyoos Lake, which sits on the Canada-US border and extends into Washington.

These distinct growing conditions, with soaring summer temperatures, are well-suited to the red grape varieties associated with Bordeaux, as well as Syrah. According to a British Columbia Wine Acreage Report, Merlot has held steady as the province’s most planted red grape over the past 20 years. Then Cabernet Sauvignon in 3rd place, Cabernet Franc in 4th and Syrah in 5th. Wines made from these grapes are earning the region a stellar reputation.

Oliver: The “Wine Capital of Canada”

In 1919, Premier John Oliver, whom the town was named for, began the South Okanagan Land Project (SOLP). The project, completed in 1927, saw the irrigation of 8,000 acres of semi-desert terrain. It was one of Canada’s most successful agricultural land developments. Today, Oliver is often called the “Wine Capital of Canada”. The area is home to 219 vineyards and 42 wineries representing 15% of all wineries in the province.

The Oliver region sits within the Okanagan Valley Geographical Indication (GI). The area further splits into subregions and sub-GIs, each with unique terroir. North of the town of Oliver, the soil is a mix of gravel, sand, rock, and trace minerals like limestone.

The northwest and northeast parts of the region receive cooling moderation from the Okanagan River and Tuc-El-Nuit Lake. There is a mix of soil types which include rock, gravel, sand and some pockets of glaciofluvial soils. The land is somewhat flat with less diurnal shift.

Black Sage Bench subregion is on the eastern flank of the valley. The terroir consists of loose sandy soils ranging from ten to several hundred feet in depth. The sandy conditions mean there is little organic matter, so producers turn to ground crops to help prevent erosion and promote nutrient retention.

The environment is arid, with high daytime temperatures. Temperatures plummet at night, giving a high diurnal range. This, combined with no natural irrigation, leads to low, but high quality, yields. Syrah is one such variety that loves these sandy soils.

The Golden Mile Bench sub-GI is west of Oliver. Here, the terroir is an elevated, east-facing slope. This means it gets slightly cooler temperatures than the west-facing side of the valley that receives the majority of the afternoon sun exposure.

The Golden Mile Bench catches the morning sun and is home to complex soils consisting of stony, gravelly sandy loams with traces of granite. They are on alluvial fans, which are cone-shaped deposits from glacial rivers. These thin gravelly topsoils at higher elevations reflect the sun. As a result, soils are warmer than in vineyards further down the hill, while the many water systems help moderate the area.

The Osoyoos region extends about 15 miles from Oliver down to the US border and sits within the rain-shadow of the Cascade Mountains. This mountain range runs from southern BC to the northern tip of California and plays an integral winemaking role in Washington and Oregon. The rain-shadow and low precipitation levels produce semi-arid, desert conditions. This, along with high diurnal temperatures, promote phenolic ripeness and acid retention. Lake Osoyoos, Canada’s warmest freshwater lake, provides necessary moderation.

The vineyards are on deep sandy soils along the shore of the lake. Without this, viticulture would prove difficult. The late-ripening Merlot and Cabernet Sauvignon hold the most acreage. Cabernet Franc and Syrah follow.

High winds affect southwest Osoyoos, while the region benefits from morning and afternoon sun and is moderated by the lake. The soils here are mostly sand, with traces of granite and loam – called glaciofluvial. The area’s combination of sunlight, wind and soil produces full-bodied and rich wines.

The Similkameen Valley lies west of Oliver and Osoyoos. Nestled on the mountain plain east of the Coastal Mountain Range, it sees long hours of sunlight. It can experience up to two hours more sunlight per day than the Napa Valley. This high amount of sunshine combined with the reflective nature of the rocks means that heat remains in the valley long after sunset.

Altitude provides some cooling influence, with many vineyards sitting between 400 and 800 meters above sea level. There is also a powerful unnamed wind that sweeps through the valley. It’s likened to that of the Mistral in southern France and helps sustainability efforts. There are fewer pests and diseases, lessening the need for spraying. Many consider the region the “Organic Capital of Canada” as more than 40% of crops grow organically.

The east-west orientation provides some vineyards with a southern aspect. In contrast, others sit on lower slopes closer to the Similkameen River. Retreating glaciers, meltwaters, floods, and streams have deposited the soils rich in calcium carbonate.

The South Okanagan desert-like ecosystem is unlike any other in the world. The unique terroir and climate produce wines that are quintessentially Canadian. The region shares a border with the US, making it accessible. It is a must-see for any wine lover, professional or enthusiast alike.