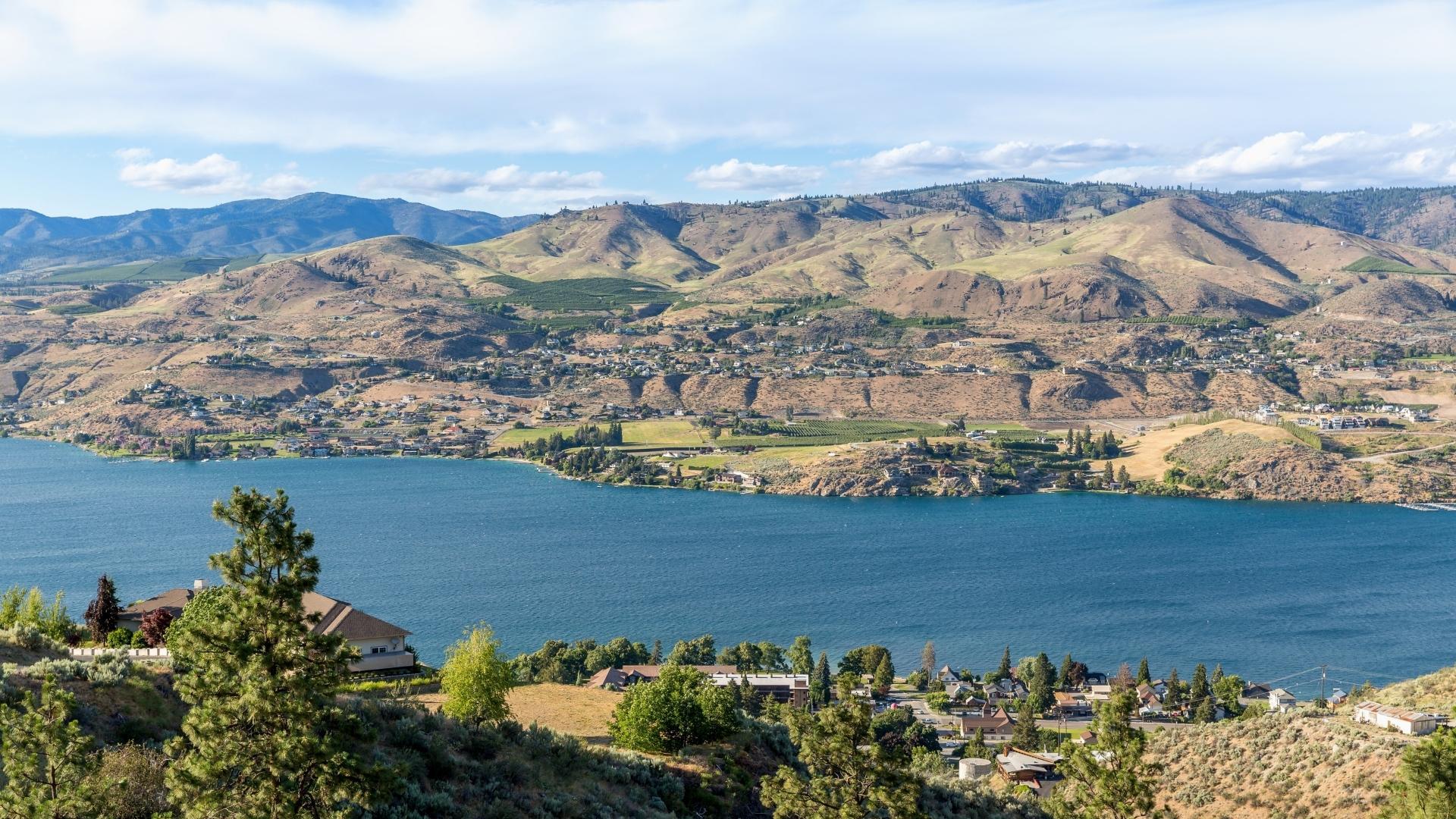 Washington State’s Lake Chelan is one of the deepest in the U.S., shimmering with beauty and surrounded by mountains. It’s a 4-hour drive from Seattle and is a year-round playground for skiing and water sport enthusiasts. Over the last two decades, an infusion of established and newbie vintners has transformed the area. Shifting in agricultural focus, from orchards to grapes, Lake Chelan is evolving into a noteworthy part of Washington viticulture.

Lake Chelan achieved its AVA status in 2009, becoming the 11th official growing area in Washington. It sits entirely within the Columbia Valley AVA but at an elevation above most other wine-growing areas. The Lake Chelan AVA begins with the town of Chelan and heads up-lake for 12 miles (19km).

The lake is made up of two basins from two separate glaciers. Wapato is the lower basin of the two and has a maximum depth of only 120 meters (400 feet). The lakeside slopes of this portion are where most wineries are situated-where glaciers left behind soil with properties like coarse, sandy sediment laced with quartz and mica. Pumiceous gravelly sandy loams are the primary soil type.

Unlike other wine growing areas that seem to be perfect for one or two varieties, the Lake Chelan climate is kind to a wide assortment of grapes. Time and experimentation will determine flagship varieties and signature styles.

The Lake Chelan area is a Region III on the Winkler Index, with between 3,000 and 3,500 growing degree days. Other famous wine regions with similar ripening thresholds include Alto Adige in Italy and the Northern Rhône in France.

The AVA is home to approximately 300 acres of grapes. Syrah is the most widely planted grape with 50 acres, followed by Pinot Noir with half that. Chardonnay and Merlot each have around 22 acres, while Riesling and Pinot Gris are the second and third most popular white grapes, with 20 and 15 acres, respectively. In smaller quantities, Viognier, Cabernet Franc, Cabernet Sauvignon, and Malbec grow alongside lesser-known varieties such as Dolcetto, Clairette Blanche, Aglianico and Tannat. Because of the area’s size limitations, many wineries supplement with Walla Walla and Red Mountain grapes.

Grape growing has been a part of the area’s history for more than a century. Native Americans once cultivated grapes here, and Italian immigrants increased vineyard acreage to roughly 154 by 1949. But it wasn’t until 1998 when the first commercial development of vineyards proceeded with Bob Christopher, who founded Lake Chelan Winery in 2000, at the helm.

Today, 30 wineries grow grapes in the AVA, many housing tasting rooms with stunning lake views. Throughout the years, tech money from Seattle has transformed the area by adding spectacular lake-facing vacation homes among the vines, some owned by the wealthiest people in the Pacific Northwest.

Yet, even with the intake of new money and new faces, Lake Chelan retains much of its charm and honors its history of a remote farming area with generations of families that still prosper here.

A Taste of Lake Chelan Wine

One of the earliest wineries, Tsillan Cellars, takes its name from the Native word for the lake, though it is pronounced the same. This stunning property includes Sorrento’s Ristorante and has space to host weddings and other special occasions. The views, cuisine, and all-around ambience feel like a version of Italy’s Lake Como.

Mellisoni Vineyards came about after many adventures in Italy during vintner Rob Mellison’s previous job exporting Italian kitchen cabinets. The agriturismo spirit of Italy is evident at this 2021 Washington Winery of the Year. The Mellisons added an “i” to their name to better reflect their adopted Italian spirit. Although they produce Barbera, Pinot Grigio, and a few Italian blends, reds tend to be Rhône and Bordeaux blends. A couple of sparkling wines round out the portfolio.

One of the most exciting families working on increasing quality in Lake Chelan is Erica and Brock Lindsay. Before 2014, the couple were 9-to-5ers with winemaking as a hobby. But bittersweet fate stepped in when their home burned to the ground, leading them to start Succession Wines. They bought the long-popular Alta Wines tasting room on the town’s main street, and today, they offer Bordeaux varietals, Bordeaux blends, Chardonnay, and a white blend. Syrah, too.

Considered the most collectible wine from Lake Chelan, Nefarious Cellars wines have become sought after for their small production. Arrange a visit, then wait to get on their extensive list of those who want to add Nefarious to their collections. If you are wondering, the name comes from a play on the winemaker’s Dean and Heather Neff’s last name. He makes the reds, and she makes the whites.